To End All Wars (book) 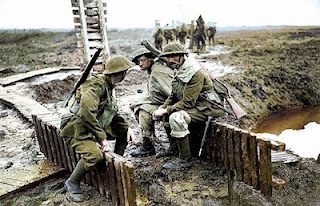 One of the signs of impending imperial collapse is the tendency of a dominant power to celebrate wholesale stupidity.

The Romans, awash in plenty, succumbed to decadence. One prime example was the phenomenon of the Gladiators. We know about the enslaved people who were subjected to violent arena games for the entertainment of the masses, but there were also the rich, pampered youth of the ruling class who, for want of the glory of combat subjected themselves to the public grindhouse for the sake of either glory or death, often both.

One of my father's favorite books is The Last Place on Earth by Roland Huntford, a chronicle of the "race" to the South Pole between Roald Amundsen of Norway and Robert Falcon Scott of England. It is a testament to the fighting British spirit that Scott's expedition, while a horrific failure, was celebrated by his countrymen as a shining example of English can-do resolve and daring. They also pasted Amundsen, who employed many modern techniques to get his crew to the Pole first and home safely (Scott and most of his men perished) as some kind of cheater. For example, the devious Norwegian used dogsleds and not horses.

Speaking of horses, I just finished To End All Wars by Adam Hochschild, a new history of World War I with a unique point of view; that the war was stupid and wrong. It covers not only the build-up to the "Great" war, and its execution (and that is an appropriate word to use) but also the British peace movement. There were loud voices against the war from the beginning, and they continued and built throughout, in spite of the draconian powers employed by the existing hierarchy to stifle them.

My education of WWI has been scant. Americans know a great deal about World War Two. It has been with us our entire lives. It shaped our nation. World War One ... not so much. For example, I have two uncles who served in the Pacific during WWII. One of my grandfathers was too young to have served in Europe in 1918, the other had a medical deferment. It is the war before talkies, before radio, before everything.

And yet, the war that started the 20th Century created the 20th Century. I was taught that the War was inevitable because of all of the interlocking treaties and that the assassination of Franz Ferdinand (I LOVE that band!) lit the bug. What we are not taught is that after two centuries of colonial expansion, the great powers of Europe believed themselves invincible, the Masters of Earth, and that war was an un-loseable game.

And so they attacked with machine guns and barbed wire, and there was nowhere to go but down. British generals longed for the day which never came, the day when they could finally open their enemies defenses wide enough to send in the cavalry. The actual cavalry. You know, with horses. That would be a glorious day. Instead each side murdered the other, for years. It was only when the U.S. joined the fight, so late in the game, that Germany capitulated. Not because there was anything special about the United States. But in a "game" where the only end in sight was the entire decimation of the others' population, it was only a war of numbers. Numbers of men. Sacrificial men. 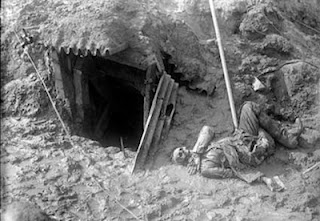 World War One was a waste of absolutely everything, gaining no one anything, and it effects have reverberated through every single battle since, up to and including today's. And tomorrow's.

My adaptation of Agatha Christie's The Mysterious Affair at Styles goes into production soon. It takes place in the summer of 1917. Our narrator, Captain Arthur Hastings, is on medical leave from the Front. His friend Poirot is a Belgian refugee. Other characters are excused from battle for one reason or another, but contribute in their own way. Reading up on the period, I have discovered after the fact elements included by the author which were popular themes at the time - including the almost maniacal fear of German spies.

Styles was not published until 1920, during that period when hostilities were presumed over, but Great Britain was no longer so great, a point which is reflected in this story and all subsequent Poirot mysteries. Britain valiantly attempts to prevail, protesting its relevance in full-throated denial of things as they are.

A lesson to be learned, for every empire.

UPDATE: My play adaptation of Agatha Christie's "The Mysterious Affair at Styles" is available from Playscripts, Inc.
Posted by pengo at 2:31 PM

Email ThisBlogThis!Share to TwitterShare to FacebookShare to Pinterest
Labels: Agatha Christie, Hercule Poirot, The Mysterious Affair at Styles, To End All Wars (book), World War One