Last night my new work, Red Onion, White Garlic, was read for the Playwrights’ Unit and several guests. It was a great thrill to hear the words, and a joy to hear the assembled laugh and react to it.

The work is a commission by Talespinner Children’s Theatre, it opens April 8 at Reinberger Auditorium. This is my third work for TCT, though the first two were ideas I brought to the company. For the 2017 season, Ali Garrigan, the artistic director, suggested I look into Indonesian folklore.

As you often discover when researching folktales, no matter where you look you find many of the same stories. The original Red Onion, White Garlic has elements in common with Cinderella. A wicked woman favors her own daughter, Bawang Merah (Malay for shallot), and not her stepchild, Bawang Putih (Malay for garlic), who is made to do all of the household chores. As in the western tale, the put-upon girl receives a magical boon, and when the jealous stepmother and stepsister attempt to capitalize upon her fortune, they are punished.

Now, this was one of many tales I found (there are, in fact, several wound into my play) but the story as is didn’t make me happy. First off, I already did the “evil stepfather” thing in Rosalynde & The Falcon. And secondly, this idea that the stepparent is mean and unfair, while it may be true in specific circumstances (there are mean people everywhere) it is an ugly stereotype and hardly in keeping with modern society.

What if these stepsisters share a mother, and that they love and care for each other, as siblings do? What would that story be like?

After the reading, the attendants discussed theme and found out just what that story would be like. It would be a story of confidence and teamwork, temperance and balance. Accountability and humility, envy and loss. These are certainly important lessons for our time.

Listeners also tuned into how beautifully the sisters get on with each other, in spite of their having been born a generation apart, and having been raised in such different circumstances. One of the most vivid comments came from Megan, a member of the Case MFA Acting program. She observed that just as many rivers flow into the ocean, there are many ways to raise a child.

New play development is a thing. It is as though almost every theater in town has its own playwrights ensemble or presents some new plays festival. Convergence-Continuum has the NEOMFA Playwright Festival, Ensemble Theatre the Columbi New Plays Festival, Dobama Theatre has a playwrights program called Playwrights’ GYM, and the Play House the Playwrights’ Unit, that last of which I am a member.

Reaching back twenty years, I was an actor for Cleveland Public Theatre’s new play festivals. That event included a prize for best play, the Chilcote Award, which would go on to receive a full production the following season. I was in the world premiere production of Lucy Wang’s Junk Bonds in 1995, and performed in both the festival (1997) and premiere (1998) production of Sarah Morton’s Love In Pieces.

In more recent years, when they produced an annual festival of works-in-progress called Big Box, I was afforded the opportunity to develop my own plays, including solo pieces I Hate This (2003) and And Then You Die (2009) among others. Each had life outside Big Box, but the assistance provided by CPT made them happen.

Of course, there are a wide variety of ways to develop a new script. You can invite friends to your house and read it. You can stage your own public reading, or submit it to a celebration of new works like the Playwrights Local Annual Cleveland Playwrights Festival or attach yourself or gain membership to one of our local theaters’ playwright collectives. You can even declare your script completed and submit it for production, here or anywhere, really. The internet has made it much easier to find companies across the country that actively seek new work. 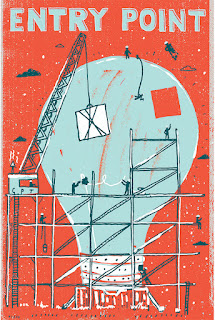 This year, CPT is trying something new, by producing a trio of events designed to progress dramatic works at various stages of completing. The first stage of these, Entry Point, takes place this weekend. Over the course of two and a half hours, audience members can move between over a half-dozen locations on the CPT campus to witness - and comment upon - new works at various stages of development.

In addition, they are featuring panel discussions on Saturday afternoon. A number of my favorite artists and CPT stalwarts are presenting as part of this project, you can even sit in on a brand new work from Eric Coble. Also, there's free beer.

My friend and colleague Carrie Williams is working on a script titled Set Fire and Start Again, since the beginning of the year she has been directing our company of five to create a script-in-hand, twenty-minute performance of what she calls “fragments” of a larger piece that she’s working toward. I have had a wonderful time working with this crew, a lot of positive energy devoted to developing Carrie’s work, giving her what she needs, we hope, to drive this piece forward.

This is the project I was referring to when describing those of us who go into the cold to create. For some reason my sharpest memories of participating in the creation of someone else's work, generally as an actor, with highlit and marked up new pages in my hand, take place in deepest winter. During the rehearsal process I was standing in the wings, and turned to face the black wall of the Levin Theatre. Painted black, and repainted many times over, how many layers of paint dating back how many years. I touched its surface, which has born witness to so much new work.

When I was a youth, when I was in college, even, I was not interested in new work. My ignorance of the classics placed a premium upon them, they had staying power and pedigree, they had been endorsed by time and I assumed therefore those were “real” plays. And I considered myself a writer!

Since that time I have come to an entirely different conclusion. New writing is the lifeblood of civilization, and that working as a collaborator (even as an actor! yes!) in the pursuit of original plays is vital to the progress of culture. The open, creative exchange of ideas in a public venue. You like movies? You like TV? It all begins with the basic, local act of crafting the words to be spoken from one person to another, on a stage, before an audience. That is the basis of understanding.