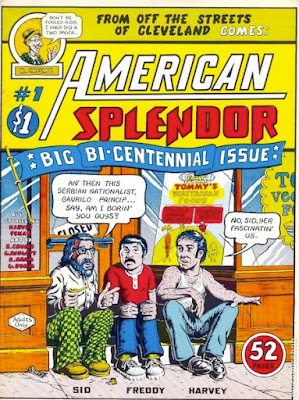 Sitting on the stoop in front of Tommy's Restaurant,
now the location of Mac's Backs Paperbacks.

Harvey Lawrence Pekar (October 8, 1939 – July 12, 2010) was born in Cleveland, to Polish immigrant parents. He graduated from Shaker Heights High in 1957 and after a stint in the U.S. Navy settled in Cleveland Heights eventually gaining regular employment as a file clerk at the V.A. Hospital. His legend, however, is as a writer, of jazz criticism and as the creator of his autobiographic comic book American Splendor.

In 1962 Pekar met Robert Crumb, who at that time was an illustrator for American Greetings. They had a mutual admiration for all things jazz, and Crumb introduced Harvey to "underground" comics. Pekar had abandoned superhero comic books as a teenager, but Crumb opened his mind to all of the different stories could be told through the medium. When he decided to reach out and attempt his own work, Pekar first contacted Crumb to be an illustrator.

He self-published American Splendor #1 in 1976. And the cover is correct, Crumb only did a two-pager.

For those familiar with his later work, which concentrates almost exclusively on his day-to-day life with wife Joyce Brabner and their daughter Danielle, the premiere issue is a little dizzying. Longer pieces like How I Spent My Summer Vacation: 1972 and Love Story (Summer 1946) tell the story of Harvey surrogates "Marv" and "Herbie" and their entirely unedited sexual exploits. One image might even be punishable as child pornography. Only one story (not including the cover) where Harvey explains how he roped Crumb into assisting him on this adventure depicts Harvey by name as himself.

Depictions of blacks and women (lots of naked tits) would also raise a few eyebrows ... but not if you were already familiar with the work of Crumb and his contemporaries. It was par for the course in the mid-70s. Looking at his later work, I would almost guess that Harvey felt he was supposed to "go there" to be part of the underground comics scene, but I would hesitate to give any closer analysis than that, other to say it's a bold first issue, and it must have taken a heap of courage for someone like Pekar to take some much of his personal thoughts and shove them out there as if to say, "This is what I think, this is who I am, take it or leave it."

And that, after all, is what everyone who loves him loves about him.

The most poignant story is Remembering Be-Ins which takes place in the not-too-distant future. Two teenagers approach the balding, 70 year-old "Mr. Shapiro" and ask him what life was like way back in the far-out 1960s. 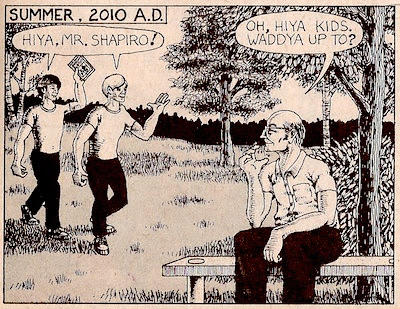