We got press! Still trying to figure out where exactly patch.com comes from, it suddenly appeared on my cultural radar last week, and suddenly there's a reporter at the last dress of The Lady, taking pictures, asking questions, and the next day we get a nice write-up.

Much ado about a school play? Perhaps. And I do wish I had spent more time on follow-through. We might have had some kind of banner for a backdrop -- though I prefer the blank, sky-blue wall, that's me. My habit is always to keep it simple, concentrate on the performance and that's it ... I owe it to Mrs. Eisenberg for staying on top of things like props and costumes from the get-go. The girls have put together some wonderful outfits suggesting different eras, one girl in particular was helpful finding suitcoats, ties and hats for the three male characters.

And hey! It's an opening! It's a premiere! An educational piece of theater performed BY students, for students!

We'll hold a brief talkback afterward, I will be available to field questions from the children.

I hope the reviews are positive.

Feb. 25 UPDATE: Winter storm results in cancellation (postponement?) of production. Trying not to be extremely disappointed and depressed this morning.
Posted by pengo at 6:48 AM No comments:

Email ThisBlogThis!Share to TwitterShare to FacebookShare to Pinterest
Labels: Noble Elementary, The Lady 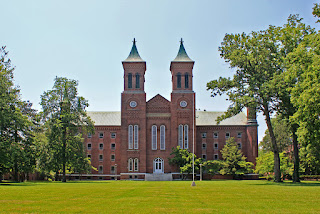 James Victor Scott (July 17, 1925 - June 12, 2014) has a preternaturally high contralto voice, a result of Kallman's Syndrome. He first drew attention as a jazz vocalist in 1950 as a member of the Lionel Hampton Band, under the name Little Jimmy Scott. At that time, he was 4-feet-eleven. 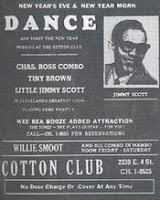 One of Scott's bandmates in the Hampton band was Quincy Jones, who once remarked, "Jimmy would tear my heart out every night with his sole-penetrating style.”

Born in Cleveland, one of Scott's first singing gigs was in elementary school, where he sang the lead in a musical version of Ferdinand the Bull. Scott was classmates with Louis Stokes at Central High School. Scott began singing professionally in nightclubs long before he was of legal age.

In 1954, Sam Firsten opened a nightclub in the Central Market area, at the corner of Huron and East 4th Street (now about fifty paces from The Q) named with no lack of imagination, The Cotton Club. Firsten hired Jimmy Scott to emcee and the produce the evening's programs, which included dancers, comedians and jazz. Within a year, the acts being booked included non-Black performers. The place was jumping seven nights a week -- with matinees on Sunday!

Jimmy himself would take in the work of Billie Holiday, Ella Fitzgerald and Dinah Washington when they would come into town to play the Café Tia Juana, at the corner of 105th and Massie Avenue.


My own introduction to the work of Jimmy Scott was in 1992 with the song Sycamore Trees from the movie Twin Peaks: Fire Walk With Me.

The Lady & The Bard

February is the longest month. Annually, I am engaged in the Great Lakes Theater Festival Outreach Tour. With the exception of last year's tour, this means putting my writing on hold for six weeks, my days spent in the office and my nights in rehearsal. This year we are presenting Daniel Hahn's Twice Told Tales of the Decameron which is a physically demanding piece of work. It is also tricky on the tongue.

Marketing Director Todd Krispinsky asked me to contribute to the GLTF artists blog on the production, which I have been only too happy to do. But I have had little to contribute to this blog. Or at least, nothing yet. It does not mean I have not been working.

For example, I am reading a thick book, A Shadow of Red by David Everitt, which (in keeping with today's theme) was a gift Daniel gave me after the 2008 GLTF Outreach Touring production, Seeing Red. This book deals specifically with the Blacklist in radio and television. How that differs from the Hollywood Blacklist ... well, that's what I am reading to learn. This is very helpful and informative as I piece together the post-Centennial career of Bernard Schrader, and how his work as a scriptwriter for radio may be viewed by those searching for Communist influences in the media.

Meanwhile, I have also continued to work with the Young Ladies of Noble on The Lady, which will be presented later this month. I did not imagine that creating a ten-minute play, incorporating eighteen (and now nineteen) ten year-old girls, with six forty-minute rehearsals, would be an easy task. Having said that, I have been delighted and surprised to find that it has, actually, been an entirely stress-free endeavor.

Ms. Eisenberg, Noble art teacher and counsellor for the Young Ladies, has been extremely helpful, acting as assistant director and defacto stage manager, keeping track of everything I am too dizzy to remember. All the girls grab pencils, take notes, remember everything, we pick up week to week from where we left off, and move forward. We have two more rehearsals in the actual performance space (the cafeteria) where we will be concentrating on projection -- on being LOUD. We may need to use microphones. But they each are doing a splendid job memorizing their lines, creating interesting characters. I am very proud of them.

Okay, as if that weren't enough the beautify my world yesterday, I was also summoned to the Cleveland School of the Arts (Cleveland Metropolitan School District) to act as a judge for the in-school competition for the English Speaking Union's National Shakespeare Competition. The winner would be sent to the regional competition downtown on Feb. 26.

The CSA is blessed to have Dr. Scott Miller as and English teacher and drama coach. He's just amazing. I was a little early and came walking into his class to witness an all-class project dramatizing Hamlet's To Be Or Not To Be soliloquy. This has nothing to do with the ESU competition, stuff like this happens in Dr. Miller's class every day. It was obvious the entire class had been working on the piece for some time, about ten kids, it's got choreography and original writing as well as Shakespeare's text to really get inside the head of someone considering suicide -- but choosing not to.

Then I saw ten high schools students perform monologues from Shakespeare with a commitment, understanding and excitement I rarely see in people so young. So much life, so much hope, so much deserved self-confidence. It was not easy choosing one to send to the regional competition. I live for such difficult decisions.

Harry E. Davis School
Temporary Home of the Cleveland School of the Arts
Posted by pengo at 5:37 PM No comments:


"We give a great concert, and George Szell gets a great review."
- Christoph von Dohnányi

Szell was born in Budapest, who was fortunate enough to be touring the United States in 1939 when war broke out. He and his family stayed and he became a naturalized citizen in 1946, the same year he was asked to become Music Director of the Cleveland Orchestra. The Cleveland was already a "highly regarded" orchestra, Szell turned it into his personal fiefdom. He grew the orchestra in size, fired imperfect musicians at a moment's notice, and reportedly told the custodians how to mop the bathrooms of Severance Hall.

He rehearsed his artists exhaustively, berating those who disappointed him, but also showing great appreciation for those who nailed it. He took the Cleveland Orchestra on its first international tours of the Soviet Union, Europe, Japan and Australia. He loved to cook and loved driving fancy cars. By 1954 he was an annual guest conductor of the New York Philharmonic.

Szell received honorary degrees from Western Reserve University and Oberlin College, and was a Chevalier of the French Legion of Honor.

Source: Wikipedia
Encyclopedia of Cleveland History
Posted by pengo at 5:32 PM No comments:

Paul Robeson, a world-famous Othello, has played the part three times before, once in London, twice in America. His rare and intense power has not been seen on the English stage in twenty-three years.

Mary Ure, Desdemonda, has shone in (John Osborne's) "Look Back in Anger".

The former performance of Othello by Robeson in London was with Peggy Ashcroft the 1930. Twenty-nine years later, however, Robeson "was Othello but, alas, the years and his persecutions had left their mark and he no longer had the energy and the technique he once had," according to director Richardson.

However, rather than pick on the legendary performer, critics had knives out for the other American, Wanamaker, who was taken to task for his "gangster" performance.