Letters From an Actor (book)

GUILDENSTERN: O, there has been much throwing about of brains.
- Hamlet II.ii

Fifty-five years ago, to celebrate the four hundredth birth anniversary of William Shakespeare, Richard Burton asked John Gielgud to direct him in a production of Hamlet, intended for a Broadway run. This 1964 performance at the Lunt-Fontanne Theatre was an iconic mid-century production, the design suggesting a professional rehearsal, with contemporary costumes and the mere suggestions of a set.

Burton here set a record, with over 180 performances of one of the most grueling characters a person can play. For a few evenings the performance was “broadcast” in something they called Electronovision (you know … Electronovision) to movie theaters across the country, reaching some four million additional audience members.

Burton ordered all copies of this recording destroyed, as it was a theatrical performance, and not meant to be a permanent record. However, in 1991 his widow discovered Burton had kept a copy for himself and thankfully she allowed it to be reproduced. It is a remarkable production, and I spent the summer of 1998 watching a VHS copy as a guide for cuts to the text which I would employ in a version of Hamlet that I directed myself the following winter.

Prior to that, there were two unauthorized accounts of the 1964 production from behind the scenes, each with titles remarkably straight-forward; John Giegud Directs Richard Burton In Hamlet by Richard L. Sterne (1967) and Letters From an Actor by William Redfield (1966).

Sterne’s account, subtitled "A Journal of Rehearsals," is the more sinister of the two; a non-speaking player (“Gentleman,”) Sterne secretly brought a tape-recorder into the rehearsal hall and reported the proceedings in detail, a shocking violation of even the most basic tenets of trust and understanding between artists.

Most impressive is sneaking a mid-sixties reel-to-reel recorder into the rehearsal hall unnoticed every day, but the admiration ends there. 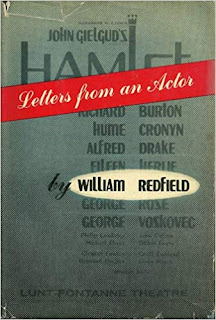 Redfield fares only slightly better in the ethics department. William Redfield was a journeyman actor, first appearing on Broadway at the age of nine, he worked consistently on stage, TV and in film. Accepting the thankless role of Guildenstern in Gielgud’s production, he wrote letters to a colleague throughout the rehearsal process and also the run of the production, first in try-outs in Toronto, then Boston and finally New York. It is those letters which constitute his book.

Both memoirs are casually mentioned in Gielgud’s authorized biography by Sheridan Morley, and I had intended to read these books for almost twenty years. The irritation I have felt taking in Redfield’s work has made me lose my stomach for Sterne’s, though that time may come. Unquestionably Redfield’s book is enjoyable, the way dishing on celebrities can be enjoyable; he takes great delight in recounting those several encounters he had with Elizabeth Taylor (who became “Mrs. Richard Burton” during the rehearsal process) in which he flatters her incessantly, and himself by implication.

But his essays about the craft acting of acting in specific and the art of performance in general would not sound unfamiliar to anyone who had to listen to the sophomore-aged me going on about such matters over drinks in the basement of CJ’s, circa 1988.

The book were better titled “While the Grass Grows the Horse Starves,” (HAM III.ii) as Redfield drives himself to distraction searching for direction or more specifically attention from his director. For weeks he feels adrift in his role while Gielgud says “you’re fine” (that’s not a quote, Gielgud makes that same comment numerous times, but says it differently and with greater pith every single time) and when his director does finally give him a note, he objects to it. It’s the worst note he’s ever received, and he checks in with absolutely everyone -- his Rosencrantz (Clement Fowler), Burton, even Hume Cronyn, who by the way is legendary as Polonius, YouTube that when you get the chance.

It’s like, dude. You’re Guildenstern. Take the note and move on.

One gets the sense that Matt Weiner could, should he want to, create a backstage miniseries about this production based on this book, re-utilizing all the costumes and props from Mad Men. Not just that these events took place in the mid-sixties, but apparently all the same laws applied to Broadway as to Madison Avenue, as the author slouches through various actors' rooms, always lighting cigarettes, cocktails described and consumed in exacting detail.

He even makes a disturbing allusion to propositioning the actress playing Ophelia, and then dismissing her existence when she objects. Late that same evening he goes so far as to suggest there is some other man in her room, casually slut-shaming her in absentia. If Richard Burton is Don Draper in this show, William Redfield is certainly our Pete Campbell. Drinking, smoking, and (not) screwing.

Did I mention that at the time Redfield was married? Married with children? Total Pete Campbell.

Okay, look. I neither read this book nor did I begin this blog post just to dump on this one actor. Film buffs might remember him in One Flew Over the Cuckoo’s Nest, in which he played the hyper-intellectual and probably closeted patient Harding. It was during the production of this film that he was diagnosed with leukemia, and died soon after at the age of 49. The New York Times called his final film performance here “close to brilliant.”

But reading Letters From an Actor was a constant frustration. Setting aside the enjoyable, gossipy kink factor, this book is useful to your interested actor not as an instructive guide to the performing arts, in spite of the author’s best intentions, but rather the potential pathology of simply being an actor. Especially one with a minor role in a major work, absent his spouse and children, and with far too much time on his hands.

He rants about his flighty, precious director (I was frankly surprised at the near-absence of homophobic comments) and when the time comes for previews to be reviewed in Canada, he takes the almost universal pans as vindication for his own feelings of doubt about the production, and specifically his own place in it. As a member of the company he concludes, early on, that the show is a disaster.

Remember: Burton set a record with this production, there were 137 performances at the Lunt-Fontanne alone. The previous record for modern professional performances of Hamlet was set by John Barrymore at 101.

As you might expect, he spends some time eviscerating the very career of criticism, trotting out the kind of basic dissection you might expect to hear (in the basement of CJ’s, circa 1988) about how theater critics can’t possibly understand or describe what they are not talented enough to execute.

When he personally (finally) receives a positive notice during the Boston previews, he takes them as the notes he felt he never received from his director. A critic for the Harvard Crimson praised his (and Fowler’s) cold-bloodedness, and so he chose to lean into that for several performances.

He took a note from a non-professional, collegiate theater critic.

Gielgud, returning from an absence, noticed the change and politely suggested, “Let’s toddle on back to what we had, shall we?”

From John Gielgud's "Director's Note" from the program for Hamlet:


This is a HAMLET acted in rehearsal clothes, stripped of all extraneous trappings, unencumbered by a reconstruction of any particular Historical Period. This performance is conceived as a final run-through, as actors call it.
- John Gielgud

Having already proved a success on Broadway, where it was almost universally praised (so much for “Canada-nice”) Redfield should be commended for publishing a book where so many of his fears were proved wrong. But he should have known better in the first place. John Gielgud, classically-trained as he was and already a Shakespearean legend, was trying to do something new and fresh with a text he justifiably felt he owned. He’d performed it himself at Elsinore Castle, for God’s sake, in 1939. Any director needs an actor's trust and this director was beyond deserving of that trust.

This spring I will enter into a rehearsal process which promises to be no less challenging, playing Kent in King Lear in an intimate production at the Beck Center, directed by Eric Schmiedl. I don’t act very often, and -- surprise -- I have never had a role in any Shakespearean performance as prominent as this. Reading Letters From an Actor feels much like a cautionary tale; of what not to do or think as a member of an ensemble. 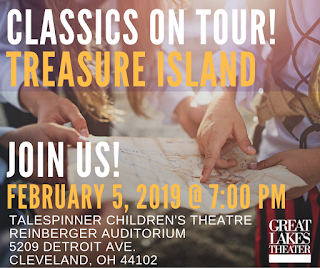 Last summer I read the book from which this script is based, and under the most pleasant of circumstances -- on the beach!

Stevenson's fascination with the sea fueled his imagination, and his bouts of illness and a desire to please his step-children with exciting narratives kept him writing.

Pirate tropes like the parrot, the treasure map, buried treasure -- these are all original ideas Stevenson created for this book!