The Great Globe Itself: Property Design 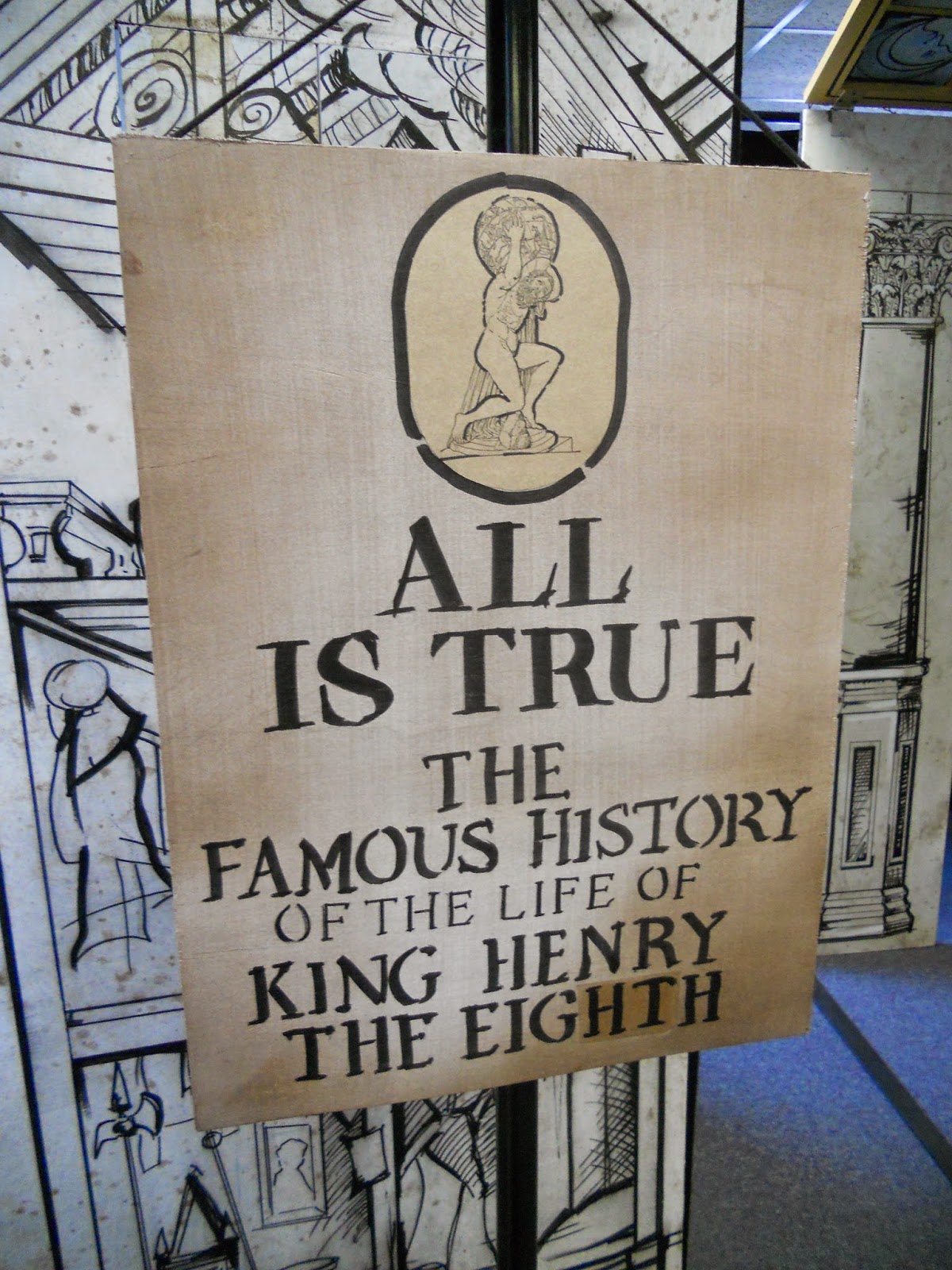 For those not engaged in the art of theater, any part of what appears on stage, any thing, which is manipulated or acted with, by an actor, whether it be handkerchief or vase of flowers, if it is handled or used in some fashion, it is no longer a costume or set, but a property, or "prop".

Terry Martin is Prop Master for Great Lakes Theater, and he also designed sets for all of the outreach tours I have written, including On the Dark Side of Twilight, The Mysterious Affair at Styles and Double Heart. We met when he designed the set for Bad Epitaph Theater Co's. production, State of Siege in 2003.

Terry has also designed the props for The Great Globe Itself, with tremendous assistance from Lexi and Rachel. In earlier posts I have described the concept behind the Globe Theatre set. One additional element in the set are signs which will help the audience understand which era the characters occupy, 1613, 1936 or 2005. 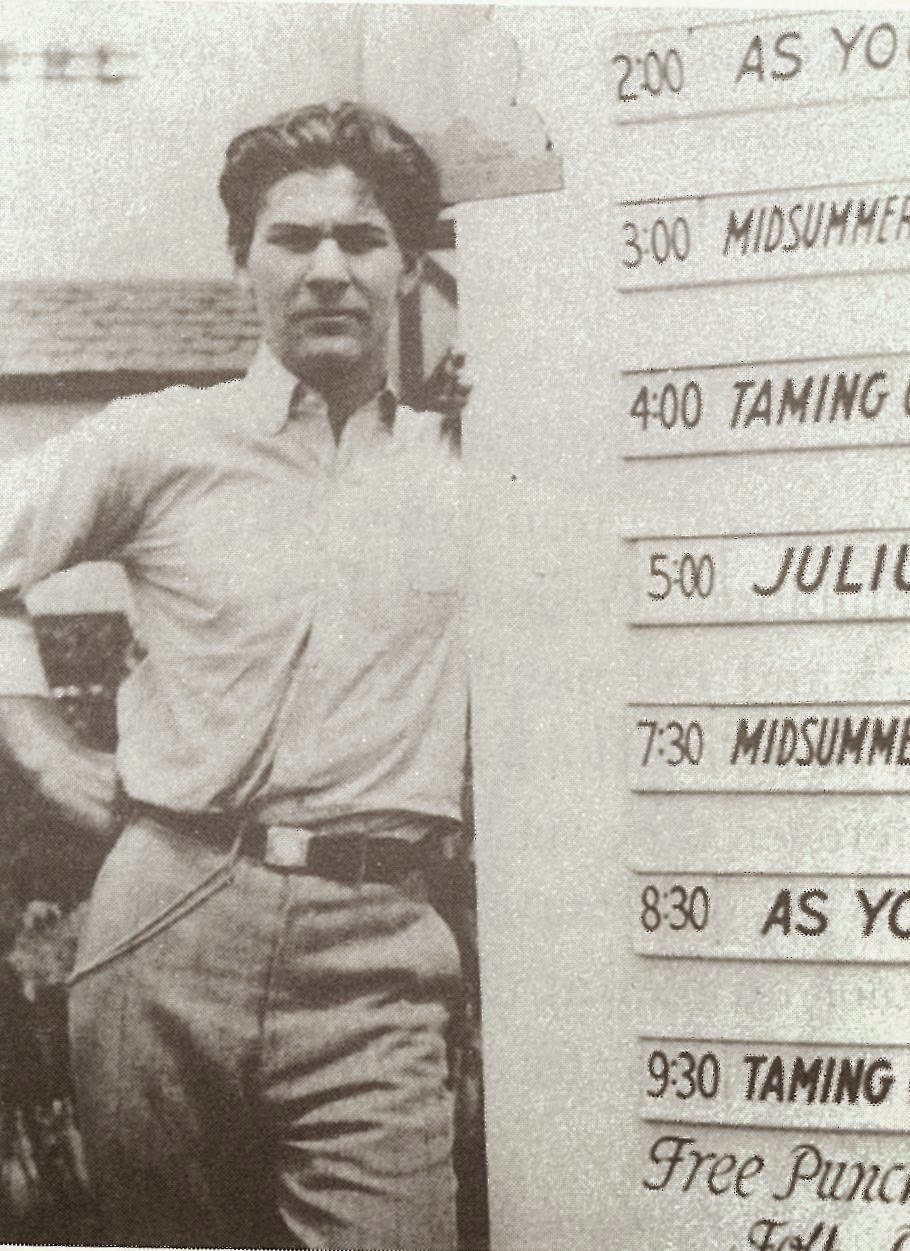 Terry was inspired to create these signs thanks to a photograph of the eighteen year-old Sam Wanamaker at the Old Globe Theatre in 1936. How clearer to show and convince, and the remind the audience that yes, they did seven shows a day, back to back, all week long, than to recreate this signpost? 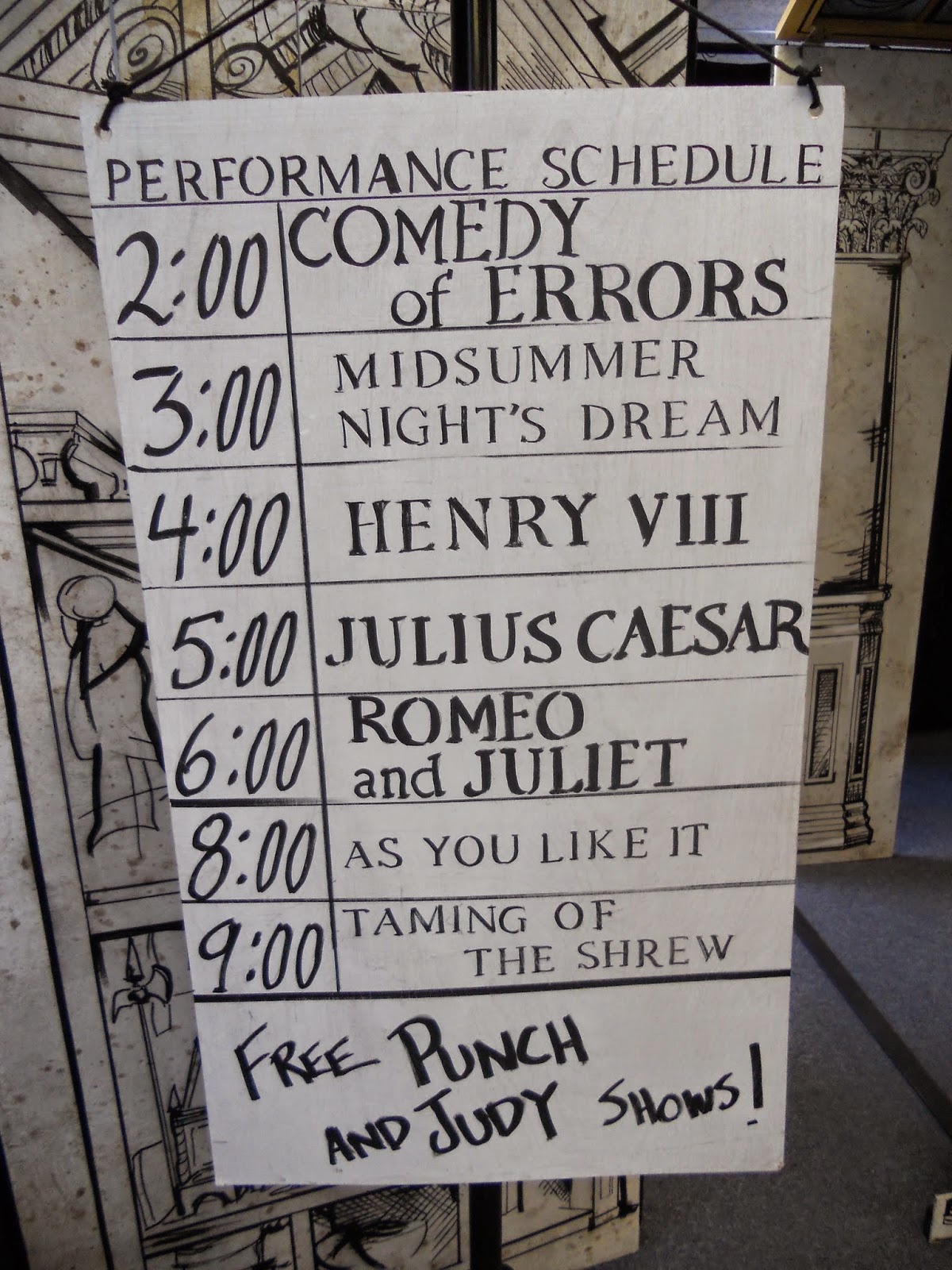 There is also an important plot point, the show order for the day, which is represented on this sign. I wonder how many audience members will catch it before our character of Sam does during the performance?

Starting with sing concept, Terry created a lovely poster for the ill-fated 1613 performance of All Is True - or - The Famous History of the Life of Henry the Eighth (see top) and finally we needed a sign which said "21st century theatre". Anyone who has attended a performance as part of the Broadway series at Playhouse Square should be familiar with this: 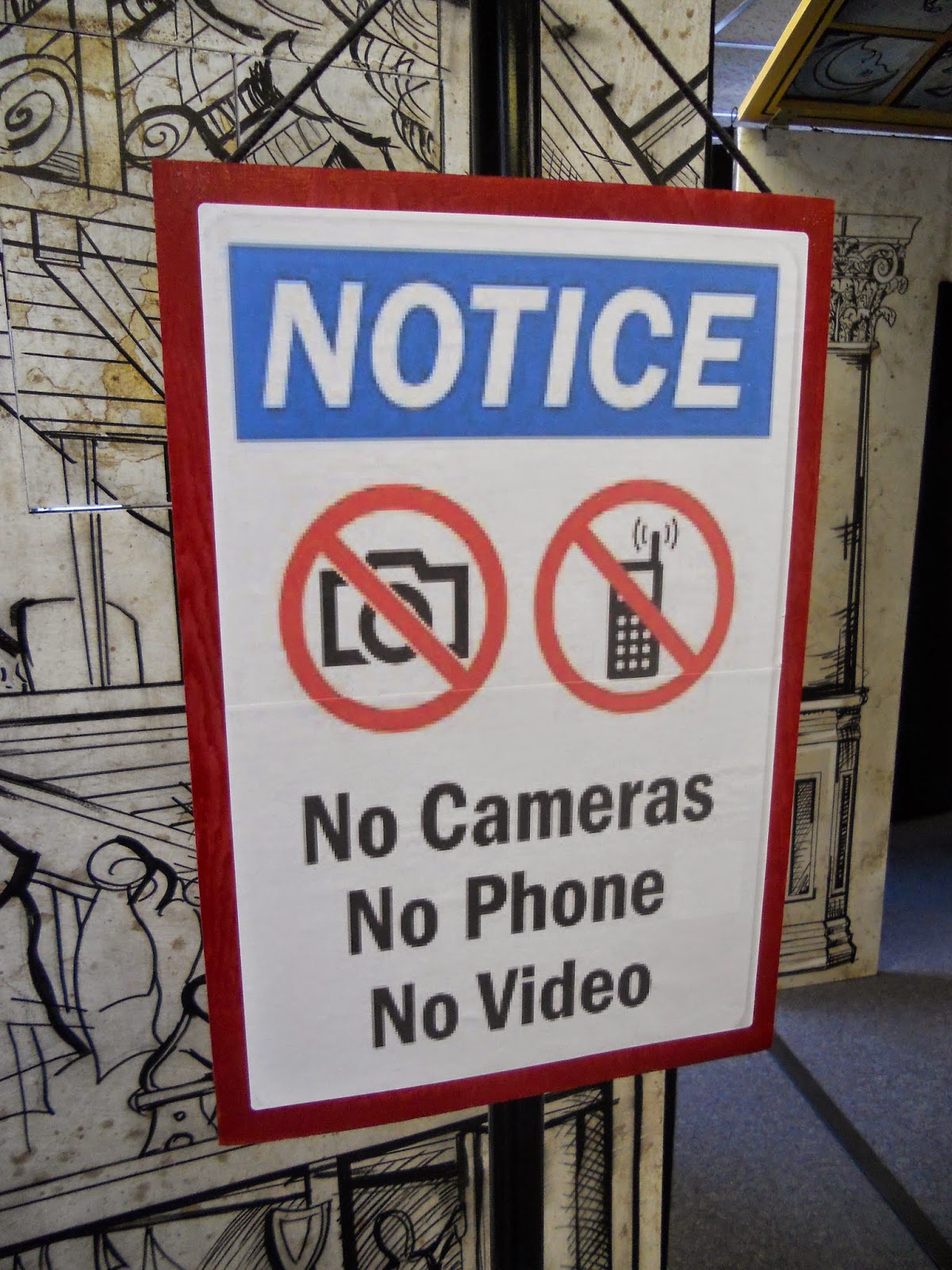 The Great Globe Itself opens Tuesday.
Posted by pengo at 10:41 PM No comments:

The Great Globe Itself: Quick Changes

Rehearsals keeping moving forward, and as we add layer upon layer of business, our three gentlemen just soak it up and grow and grow.

Bizarre accents? Sure, no problem. By the end of the 1613 scene you will wonder why Shakespeare isn't always spoken like this.

Big dance number? No problem. They can do that, too.


Right now we are incorporating the numerous costume changes into the production. Esther has made herself available to witness and assist, as decisions are made as to what is and is not possible in, say, a six-second costume change.

Tomorrow sound designer Richard Ingraham will begin to incorporate sound cues. I LOVE sound design! It's all becoming one rich tapestry of music and noise and history and humor.

We open in six days.
Posted by pengo at 2:29 PM No comments: 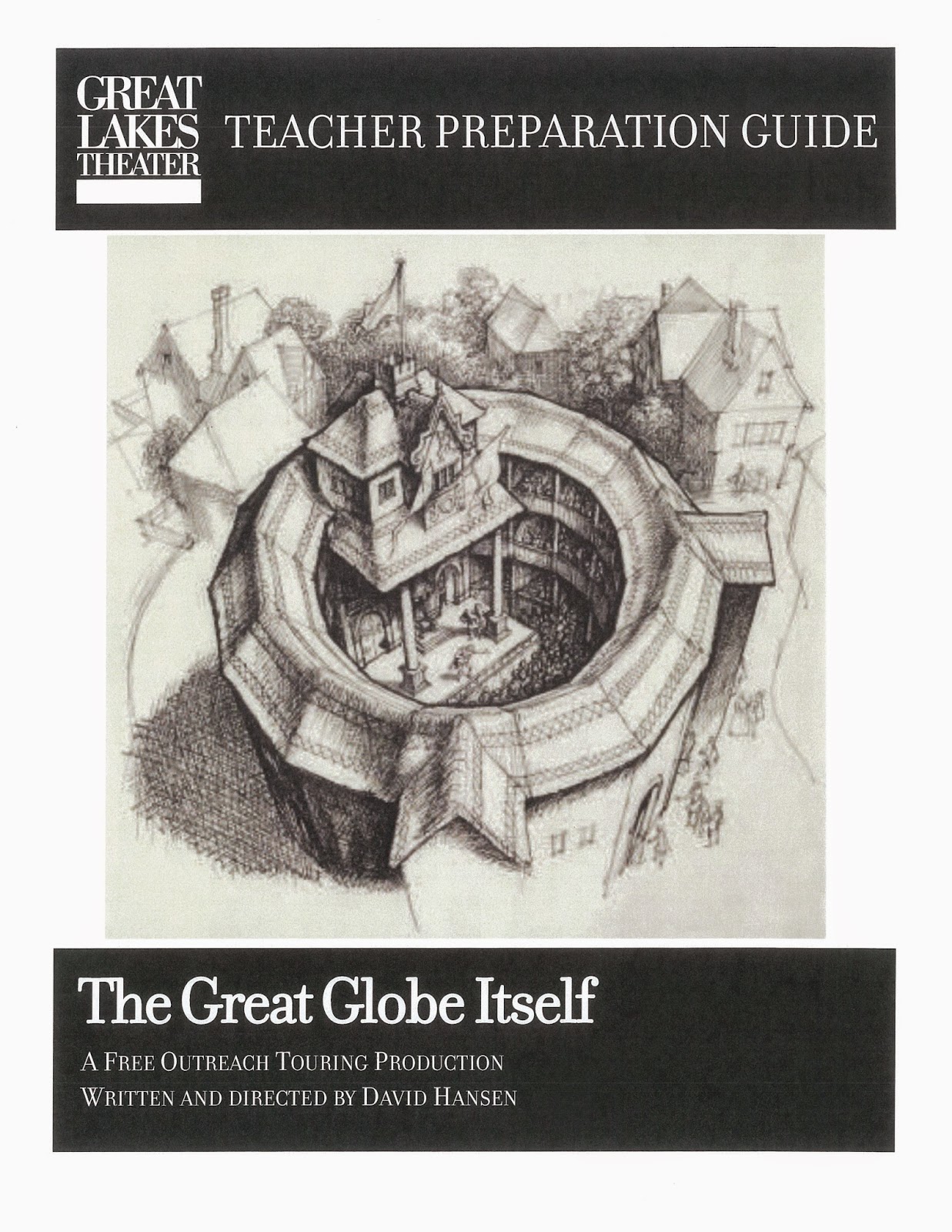 This year we have expanded the number of schools the tour visits from five to nine. Two of these schools are middle schools, we traditionally visit high schools. Sometimes the material is a bit mature or complex for pre-teens, and we leave it to parents to decide whether to bring their children to the public performances.

Every mainstage production at Great Lakes Theater includes a series of matinee performances for students across four states, and for every production there is an original Teacher Preparation Guide. These guides are created by GLT staff, area educators and academics including relevant articles, discussion prompts and pre- and post-attendance activities.

We do not often create a guide for the outreach tour. The last time we did this (I believe) was for the Seeing Red tour in 2008. That play was a dramatization of testimony before the House Committee on Un-American Activities, and so we provided a guide detailing the history of the committee and biographies of persons represented or referred to in the work, including Hallie Flanagan, Ronald Reagan, Paul Robeson and Arthur Miller.

The Globe is chockablock with historical personages and steeped in true historical fact (that I mess with) and so we have created a guide to hopefully bring our student audiences up to speed. Most of this original material was sourced and scribed by our education intern Elizabeth Finley, who is a recent graduate from Malone University. We are all very grateful for Elizabeth's great work, creating  this very useful guide, which you can access from the Great Lakes Theater website.
Posted by pengo at 10:22 AM No comments:

The Great Globe Itself: Blocking 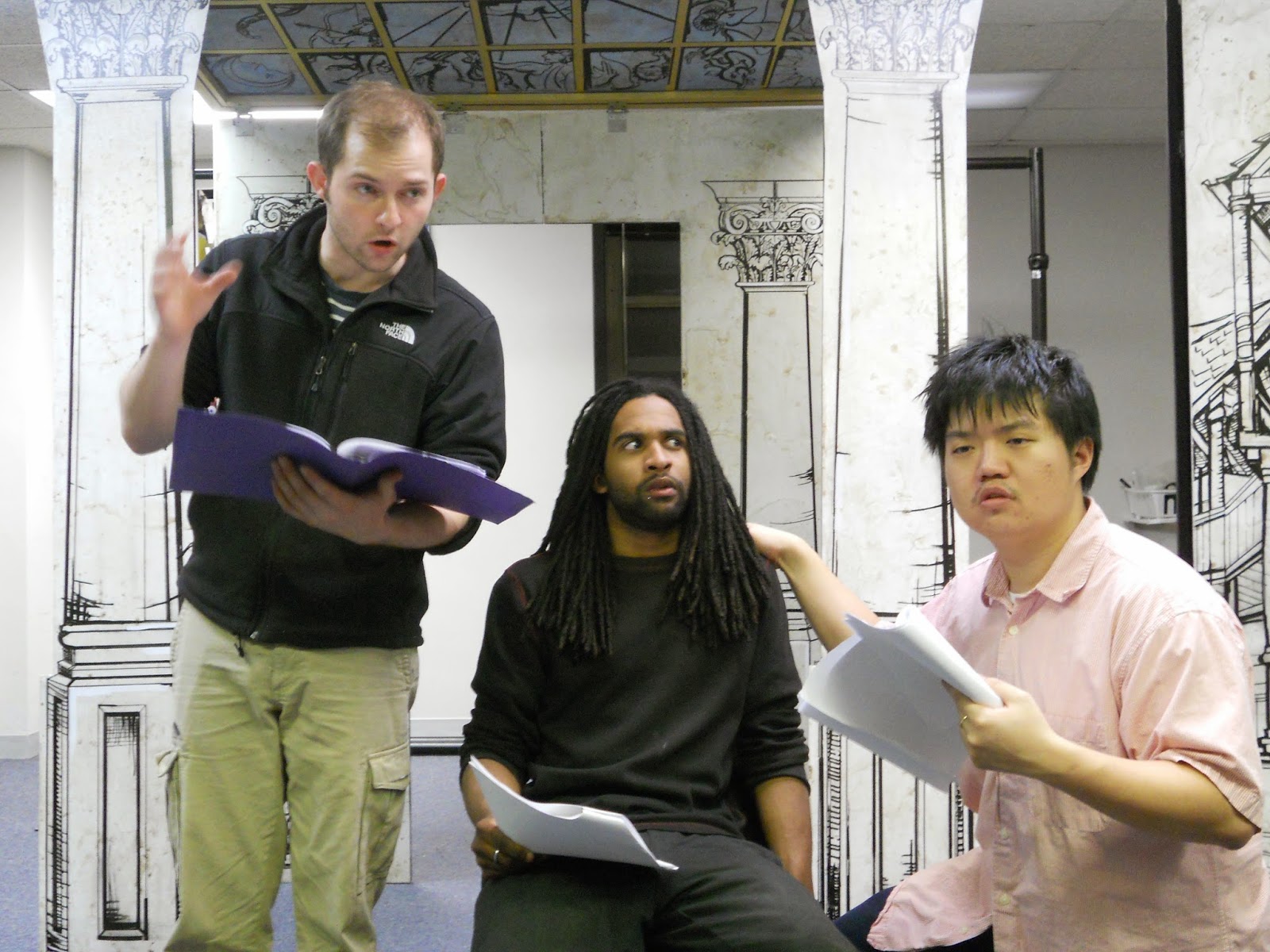 Three nights, three scenes. Each scene between sixteen and twenty minutes in duration, and that includes the dancing. We will easily bring that down and the entire show will be under an hour.

Last year (Seven Ages) we were costume light but prop heavy, this year it is the other way around. Working through the Great Lakes Exposition Tuesday last night we discovered we would need a clipboard and a baby, and that was about it.

Tomorrow we will be stumbling through the entire piece a few times (maybe twice?) but on Sunday we need to add costumes. During the 1936 scene alone each actor will cycle through no less than four costumes, Rod himself has five. The changes are going to be kind of a big deal.

It has been five years since we have had a cast of only three, the last time was On the Dark Side of Twilight (2010). There is a special kind of attention and focus that comes with such a small ensemble, we work for three hours and there is little down time – sitting time – for any of them. Each of them just has too much to do at any given moment.

By the end of the night this evening, The Globe was a glob, meaning we have given it a basic shape. Our gentlemen should have their lines down by the beginning of next week and they can truly begin embodying their characters and telling the story.

Who can turn a glob into a globe?
Posted by pengo at 10:09 PM No comments:

The Great Globe Itself: Choreography 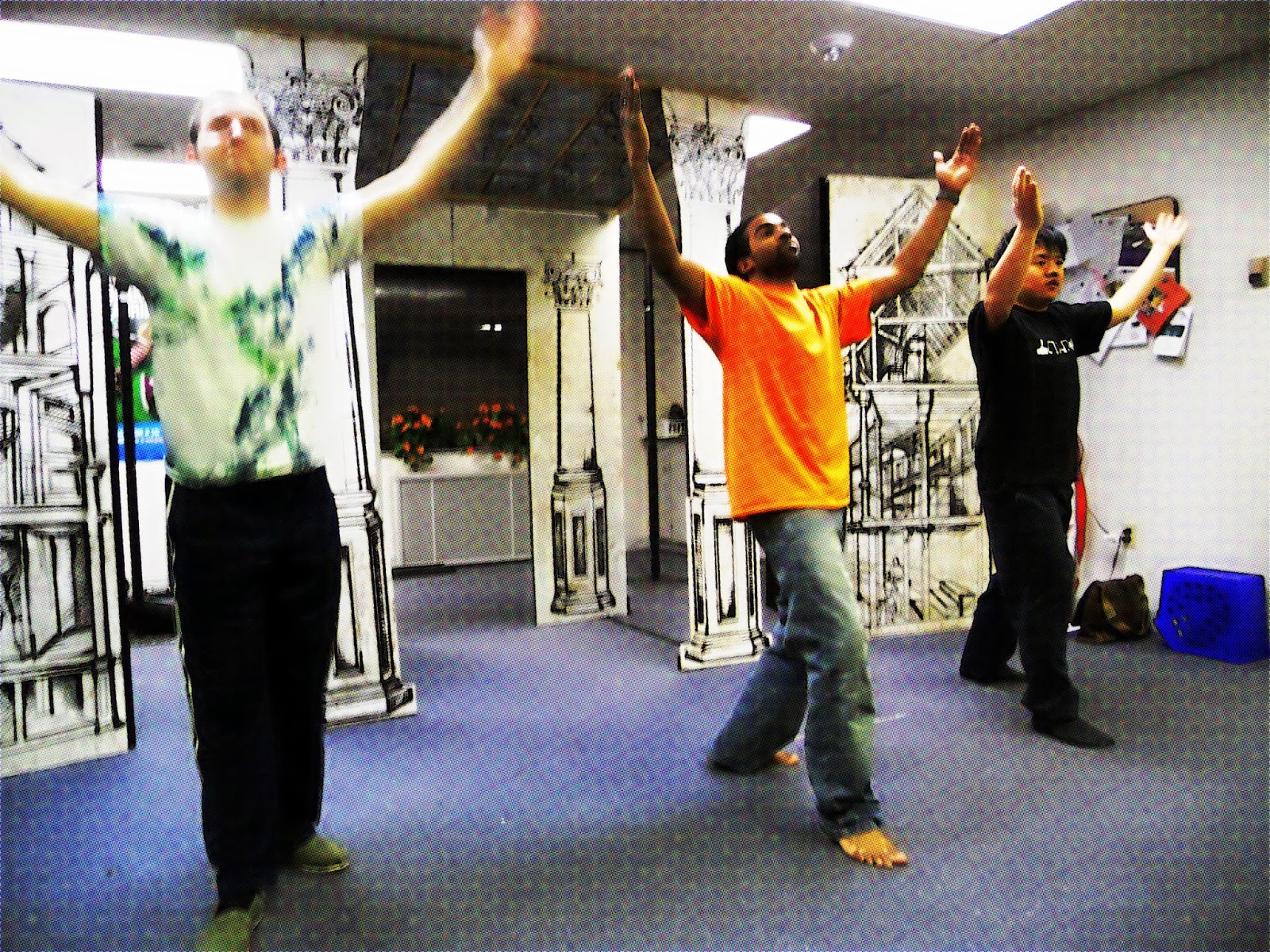 Rehearsals for The Great Globe Itself began in earnest last Wednesday. For three nights we met in our rehearsal room, and sat and read and talked. Actually, they did a lot of reading, and I did a lot of talking. But we all sat, looking at books and pictures, sharing stories and tackling several interesting English dialects – OP, Midwestern American, and a few modern of British.

Chuck, our dialect coach, worked one-on-one with each guy while the rest of us kept reading and studying. I threw so much stuff into this script, I have been anxious about how it would be handled by the actors, any actors. By the end of Friday night I was pretty confident that things were on track.

It’s weird, for several years now rehearsals for the outreach tour began in mid-January, with performances commencing the second full week of February. For years we have had a performance on Valentine’s Day -- we auspiciously opened Double Heart on Valentine’s Day itself. Yet we had yesterday off. If we had our traditional schedule, today we would have held our first Sunday afternoon show for an audience braving temperatures below 0° to attend this hot show. I am very glad we pushed the production back a few weeks this year. 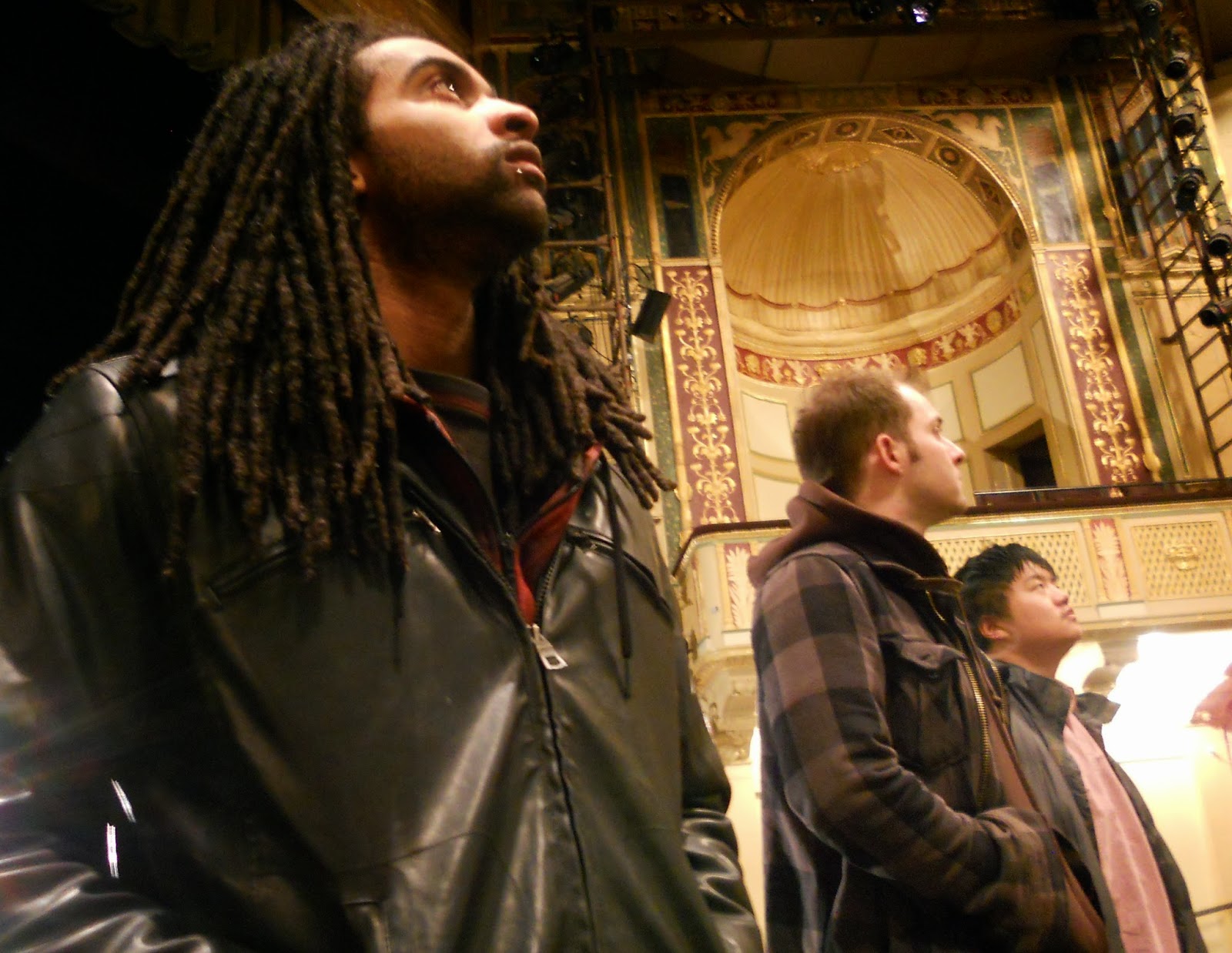 Friday evening we took a little field trip … downstairs. I took our gentlemen into the only theater in Northeast Ohio that approximates the conditions of performance present in the Globe Theatre: the Hanna. Safety regulations prohibited our men from standing or working on the thrust stage, but they did have the chance to stand in the house and gaze up into the galleries, and to take in the stage as an Elizabethan audience member might, from all sides, from in the historic boxes.

Tonight, choreography! I have such vivid, happy memories of the dances Carli created for Double Heart. Critics in New York commented upon James’s and Emily’s dance together … sure, I wrote some good lines, but the dancing was how audiences believed they had fallen in love.

The other piece Carli has prepared is inspired by the curtain call dance, or “jig” which would have been expected from Shakespeare’s audience. If his text is to be believed (or rather, if you are to expect the opinions of certain of the Bard’s characters to be his own opinions) then Shakespeare hated concluding his performances with dancing. But what are you gonna do? The groundlings expect a jig and by gar, we're gonna give them one.
Posted by pengo at 8:58 PM No comments:

The Great Globe Itself: Set Design

This is a play about a building. The play is named after a building, the phrase The Great Globe Itself is from The Tempest, as Prospero describes how all things must eventually end, how life is merely an illusion.


"We are such stuff as dreams are made on, and our little life is rounded with a sleep."
Indeed. The entire play takes place in our around one of three Globe Theatres. In our first meeting, scenic designer Terry Martin and I discussed how literal this set should be. We agreed what we did not want was for it to look like anyone's set for The Complete Works of William Shakespeare (abridged).

The word "rendering" was introduced several times, and in fact shortly after our first production meeting, when Todd and I were conceptualizing the production image with the folks at TRG, they themselves chose the word "rendering" to describe the item Arthur's character would be holding in his hand. This idea of the Globe in the form of a ground plan or blueprint had definitely taken shape.

We will be rehearsing in a small office downtown, per usual. This is good, because if the set fits into the rehearsal space, then we know we can manage to squeeze it into pretty much any of our locations.

This has got to be one of the simplest, most elegant, and lightest touring sets we have ever had. And it is ideal, representing the Globe artistically as architecture. 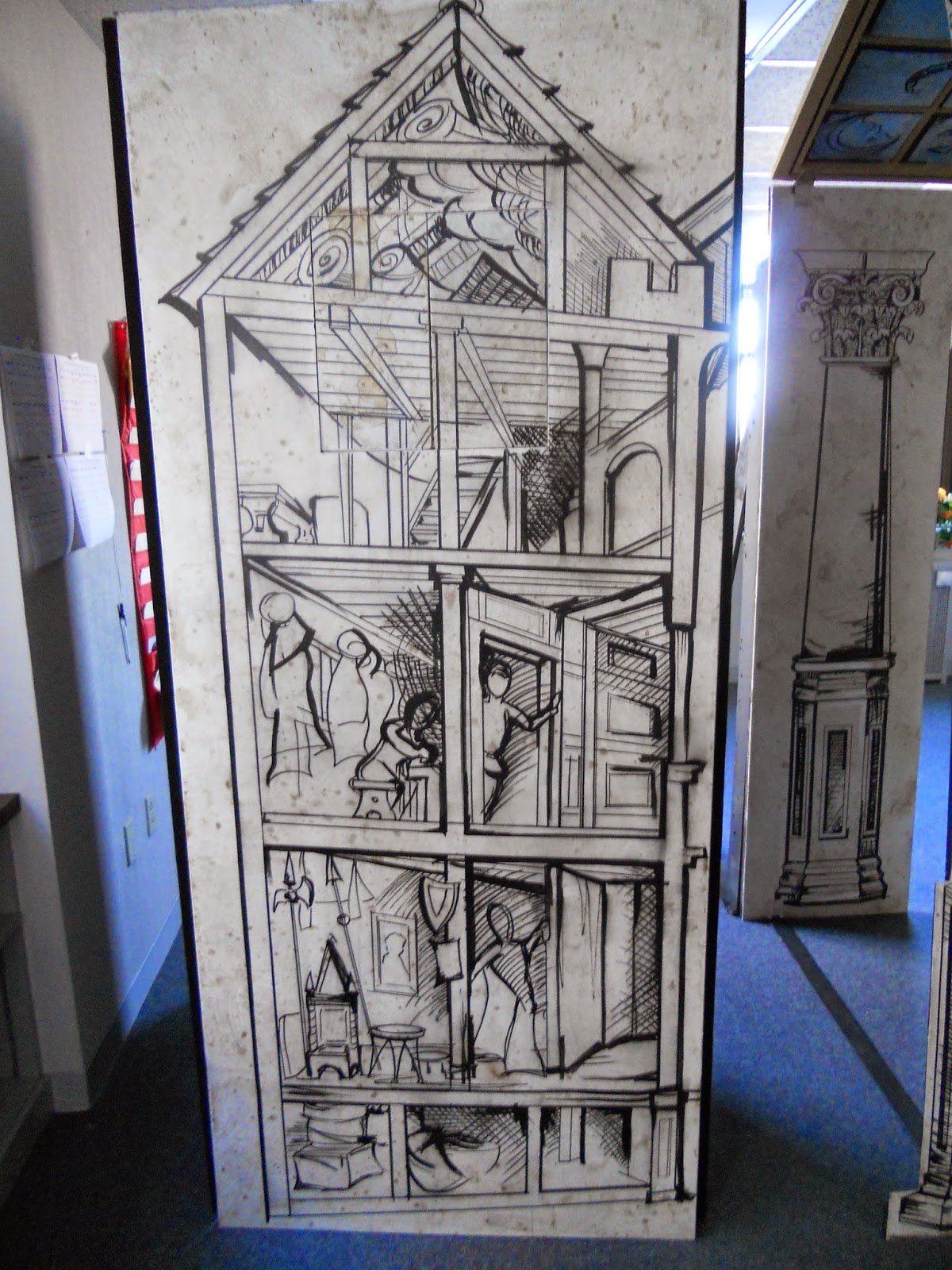 Stage right presents backstage, the Tiring House, the storage in the Heavens, costumes and all that. 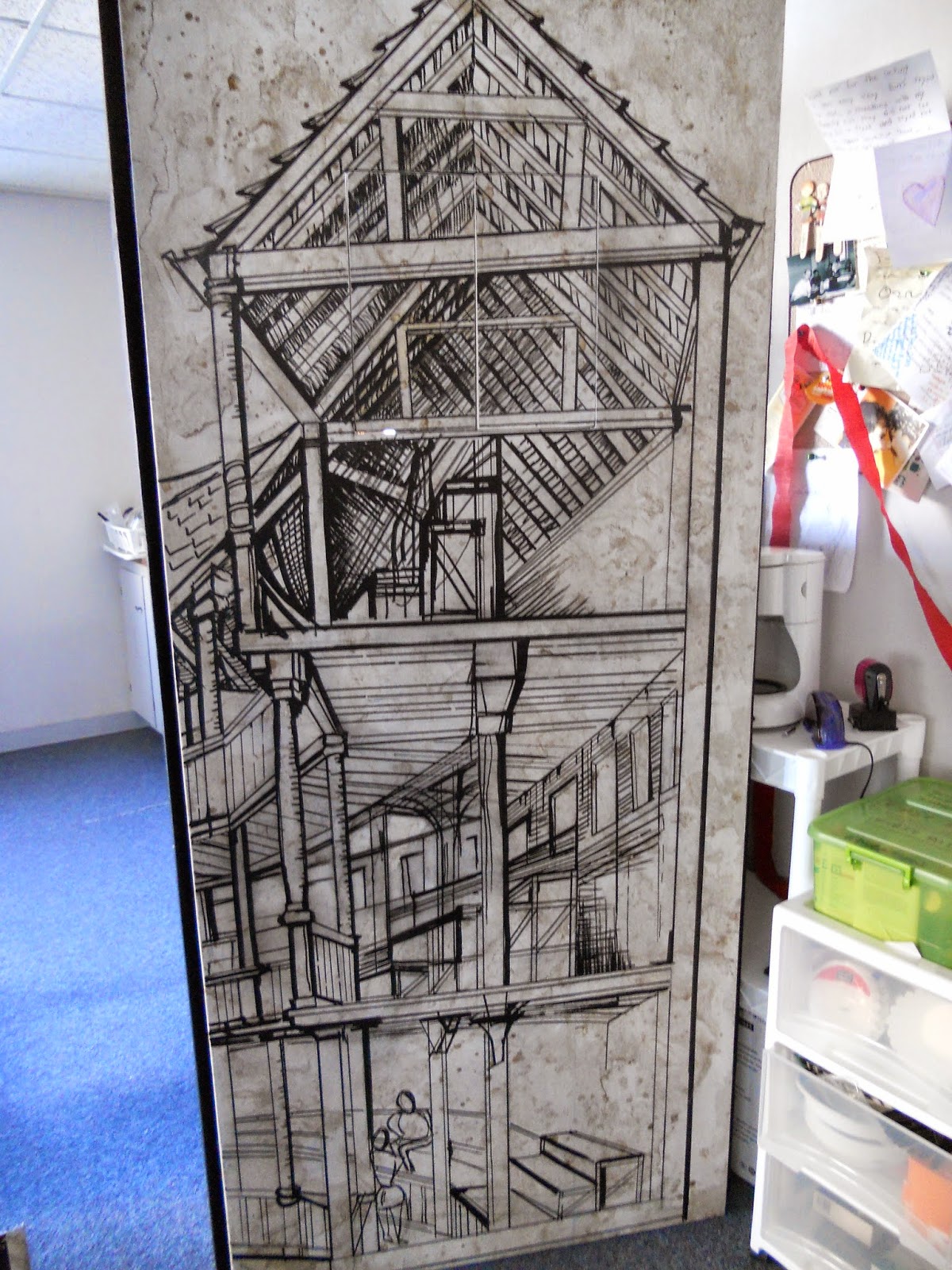 Stage left, the galleries, the public area occupied by audience members. Performers in the show refer to the galleries several times, but our work will be performed largely in non-theater spaces with one level of audience, on the floor. 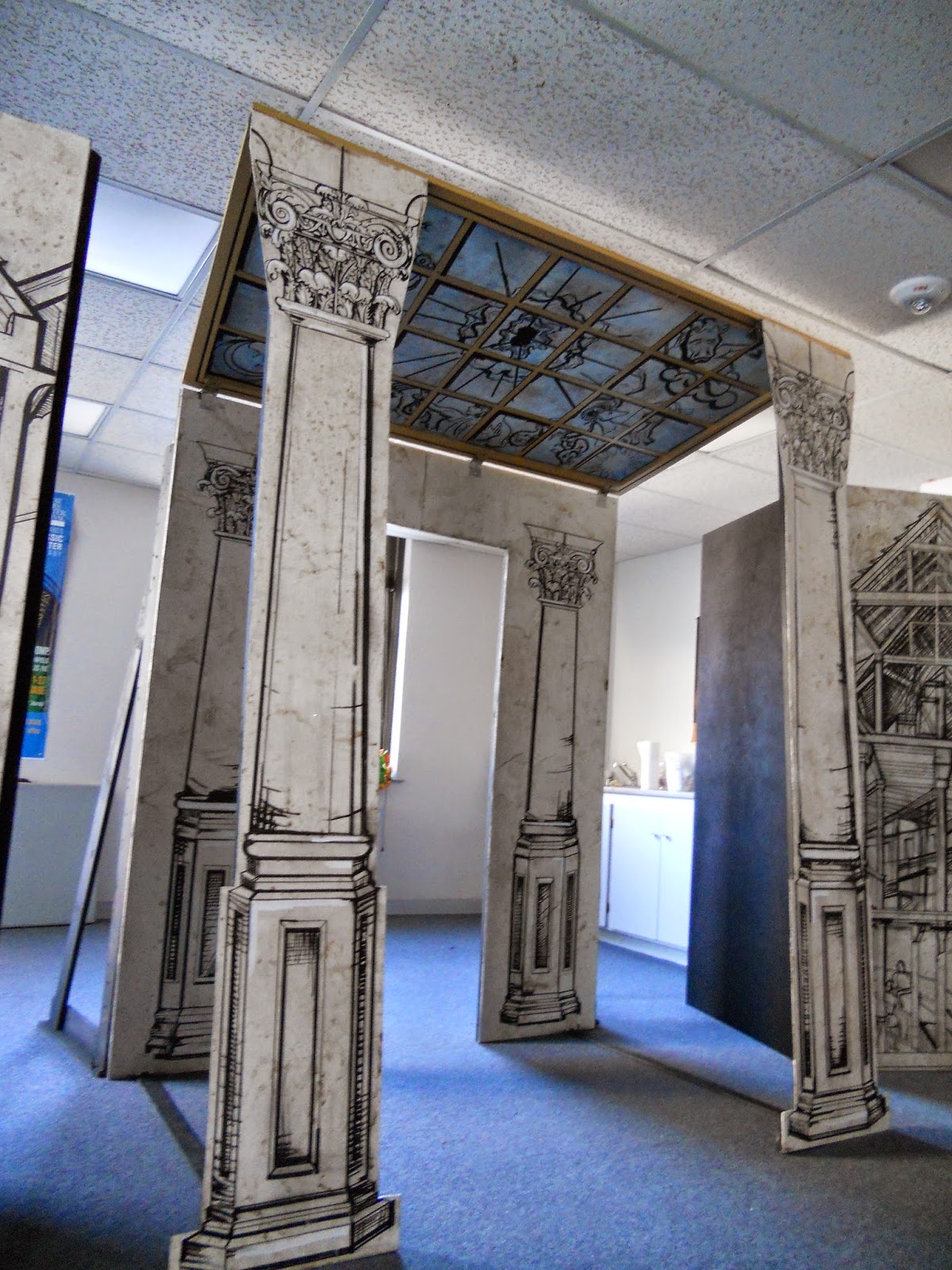 Here we see the foreshortened "Heavens" - the ceiling over the Globe stage. These columns suggest the thrust of the theater's platform stage, but will work in a shallow stage space like that at Lakewood, but also provide a "launching pad" into the audience which will work extremely well at Workshop Players. I am very excited to see how this simply device will work in all of the different spaces, large and small.

Terry drew these designs himself, by hand, and though it is hard to tell from these photographs (because these photographs I took aren't very good) the surface has the patina of parchment. This is his original model, life-size!
Posted by pengo at 10:56 AM No comments: