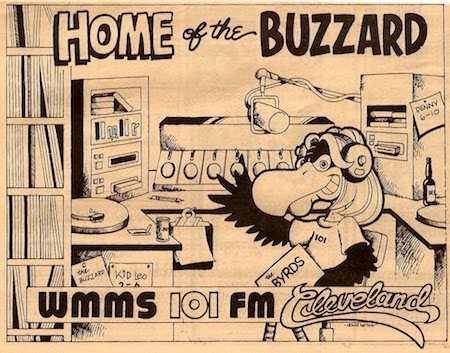 In 1968 the call sign for WHK-FM was changed to WMMS (reflecting then ownership of the MetroMedia corporation) and fiddled around with several different formats - "Progressive" Rock, adult contemporary - until 1973 when John Gorman took over as music director. Gorman would shepherd the station for the 13 years, establishing a popular rock music identity that, to this Gen-X citizen, remains the longest-lived and only truly distinctive personality a pop music station in Cleveland has ever had.

What other radio station gets a heads-up in Almost Famous? That's right.

WMMS takes credit for breaking Bruce Springsteen, as well as a largely disproportionate number of other Columbia Record label stars of the 1970s and 80s. Wait, did I say that?

Genesis played a two-night gig at the Music Hall on April 14 & 15, 1976 promoting A Trick of the Tail, their first studio album without original frontman Peter Gabriel. The second performance was broadcast on WMMS.

Former Plain Dealer columnist Karen Sandstrom is now a burgeoning illustrator, and keeps a very handsome blog chronicling her work and her progress. Yesterday she shared a sketch for a potential book, a drawing of the legendary creature Squonk. A North American mythical creature, when captured the Squonk will weep so terribly that it entirely dissolves into tears.

Squonk (as Sandstrom notes) is the subject and title of the first track on A Trick of the Tail. Considering the concern many fans had that reedy-voiced drummer Phil Collins would never be able to step out of Gabriel's shadow, Squonk sounds almost intentionally brash, deep and rich.

There remains controversy as to whether or not the final refrain is a very personal jab at their recently departed lead singer:


All in all you are a very dying race
Placing trust upon a cruel world.
You never had the things you thought you should have had
And you'll not get them now,
And all the while in perfect time
Your tears are falling on the ground.

Unfortunately, this 1976 performance of Squonk was, for some reason, not recorded by WMMS for broadcast.