The Comedy of Errors

When two twin brothers and their two twin servants are unexpectedly reunited after three decades apart, the unsuspecting port of Syracuse is torn apart at its seams. With a zany cast of unforgettable characters and a myriad of mistaken identities, Shakespeare’s greatest comedy delivers triumphantly on its famous title. - Great Lakes Theater Festival synopsis of Shakespeare's "The Comedy of Errors" (2009)

"The Blackfriars Company" performing at the Old Globe Theatre at the Great Lakes Exposition presented six abbreviated adaptations of Shakespeare's work in the summer of 1936. Their production of The Comedy of Errors clocked in at "a mind-blurring thirty-six minutes" (Vacha)

The eighteen member company included the young Sam Wanamaker. You would think that such a small company for a Shakespearean comedy would afford plenty of opportunities for the 17 year-old Chicagoan actor to have at least an interesting supporting role. Alas, the program lists him double-cast as "a guard" and "attendant." In Julius Caesar he is Second Citizen ("Peace, silence! Brutus speaks.").

I believe that is him pictured above, center, trying to be seen amongst all the hats.

Source: Showtime In Cleveland
Posted by pengo at 6:59 AM No comments:

Built in 1921, the Ohio Theatre is the smallest of the four Playhouse Square theaters which line the north side of Euclid Avenue, west of East 17th Street. The Ohio was designed in the Italian Renaissance style, and throughout the 1920s it had a stock company and presented touring Broadway productions.

In 1935 it received an art-deco face-lift and was re-opened as the "Mayfair Casino" supper club. It wasn't really a casino, because casino gambling was at that time illegal in the state of Ohio. It closed in December, 1936.


The Mayfair Casino in Cleveland, Ohio is a theatre restaurant so intriguing so perfect in its appointments and subtle good taste so superlative in its service so ultra modern different and new it will entice you to come again and again. The Main Dining Room and Sky Bar. Largest and most beautiful Cocktail Lounge in America. Under the personal direction of George Pomerantz. - Mayfair Casino program 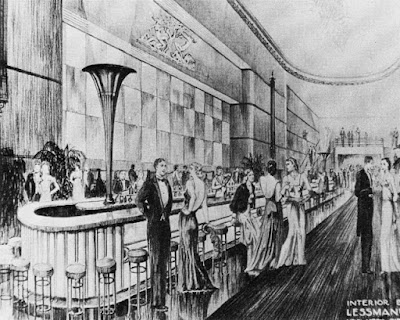 Sources:
Cleveland Memory
Wikipedia
Posted by pengo at 5:31 AM No comments:

The Kokoon Arts Club was founded in 1911 by commercial artists from the Otis Lithograph Company. They were inspired by "the bohemian spirit of the Kit Kat Club in New York" and through the year enthusiastically explored "new art" (Modernism) in all its forms. The club became notorious for its annual (on an irregular basis) benefit parties or "costume bals." Apparently everything they did had artistic spellings - their name, it was eventually decided upon was inspired by the idea of metamorphosis or transformation or what have you.


At the age of 19, Philip Kaplan (born in Russia in 1903, came to the United States in 1911) developed an avid interest in the European and American artistic and literary movements of the day. Attending evening classes at the Cleveland School of Art and at the Kokoon Arts Club prepared him to begin working as a professional artist. In the late 1920s and 1930s Kaplan worked as a decorative painter, painting murals in homes, schools and business in Cleveland. He also worked as an amateur photographer and lithographer. Kaplan received awards in the Cleveland Museum of Art's annual May shows in 1929 and 1930.

Kaplan joined the Kokoon Arts Club in in 1925 and became a very active member, serving in a number of posts including president (1932). According to his own notes, Kaplan left the Kokoon Arts Club in the late 1930s following an incident in which a fellow member, Rudolf Schatz, spread an anti-semitic leaflet around the club. Kaplan wrote a protest letter, but few club members supported his response, most feeling it was better to ignore the original leaflet. - Kent State Archive

Members of the Kokoon benefited from federal arts projects, painting murals at the Cleveland Public Library, and other public buildings. The Kokoon Club's influence began to wane as what was considered "Modern" began to move into the mainstream.

11/8/2011 UPDATE: Dee Perry interviews CWRU Professor of American Art Henry Adams about his new book, "Out of the Kokoon." 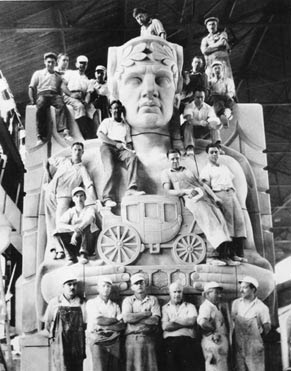 The Lorain-Carnegie Bridge was completed in 1932, reaching 5,865 feet across the Cuyahoga River, connecting the east and west sides. It features fabulous art deco statues, carved from Berea sandstone, and designed by sculptor Henry Hering and architect Frank Walker, facing in both directions at either end of the bridge. Each of the "Guardians of Traffic" (so they are actually called - I have always mistakenly referred to them as guardians of transportation) hold some wheeled vehicle; a car, truck or wagon of some kind. They each specify the "spirit of progress through transportation," said the bridge designer, WIlbur Watson.

They evoke several different styles all at the same time, from the wings of an Assyrian bull, the winged helm of the Greek god Hermes, and the striking angular, art deco fashion that was demanded at the time. The funding was approved in 1927, before the economy soured, and a lowered level dedicated to commercial traffic was scrapped.

In the 1980s it was renamed the Hope Memorial Bridge, after the father of legendary funny man Bob Hope. William Henry Hope was Cleveland-area stonemason.

What are now the pride of St. Louis, the Cleveland Rams football team was established in 1936.

The name comes from the Fordham University mascot, which provided a number of the players. They finished their inaugural season in second place in the newly formed American Football League, with a 5-2-2 record.
Posted by pengo at 8:52 PM No comments:

The New Yorker, September 16, 1936
Okay, someone has to explain this to me. So I found out was a Trans-Lux is, they manufacture stock tickers. And I understand how rich people would want to gather around the dire financial news that Roosevelt didn't create to collectively blame Roosevelt for it.
Posted by pengo at 2:57 PM No comments:

Dick Tracy ... before he dicks you (good night!)

Chester Gould's often violent strip (premiering in 1931) was wildly inventive with its depiction of the outward manifestation of evil in his villains' face and bodies. Flattop Jones, Pruneface, Shoulders ... you can just picture them even if you've never seen the strip. It is a major disappointment (to me, anyway) to discover the 2-way wrist-radio was not invented until 1946. Having said that, Dick Tracy can be credited as the first "true crime" strip, featuring a crime committed, followed by Tracy's detective work, often resulting in the pursued criminal to commit an even more heinous crime, concluding (eventually) with some kind of outrageous and deadly gunfight.

Then there was his relationship with the frustrated Tess Trueheart. It doesn't help that the very first caper in Dick Tracy was Tess being kidnapped and her father murdered. Really Chet? Murdered?

I have been looking into comic strips.

Click on to enlarge.
Milton Caniff began Terry and the Pirates in 1934. It began as an action-adventure strip, with the young Terry and barrel-chested journaliast Pat Ryan seeking a gold mine that "belongs" to a relative of Terry's in the "Orient." They have myriad adventures, battling with and against numerous grotesque Asian stereotypes.

Most wonderful was the Dragon Lady, template for so many Western male fantasies. She was villain, at first, but also sexy and flirtatious and strong and wily. She even once taught Terry how to dance.

Caniff was inspired by books about women pirates. During WWII the Dragon Lady would become an ally, working against the Japanese.

Sources:
Toonopedia
Posted by pengo at 6:14 AM No comments:

Email ThisBlogThis!Share to TwitterShare to FacebookShare to Pinterest
Labels: comic strips, Terry and the Pirates, Toonopedia

The line was to hold a special place in history as it was the first trolley coach line to actually enter a downtown area of a city with a million plus metropolitan population. This line required 20 cars to hold service. An additional 8 cars were purchased in 1937 to handle the increased ridership on the line. - Ohio Museum of Transportation

Happy birthday, guy.
Posted by pengo at 6:33 AM No comments: