Here Are The High School Plays!

Several years ago, playwright and teacher Stephen Gregg, in his blog Playwright Now, put forth an argument that high school drama departments should stop producing hoary chestnuts of yesteryear.

Last year, as in most years of the late twentieth century, the top ten most produced plays in American high schools were crowded with scripts written at least a half-century old (or much older) including You Can’t Take It With You, Twelve Angry Men/Jurors, Our Town and The Crucible.

Add to that works of Shakespeare like A Midsummer Night’s Dream and Macbeth (which are at least on the curriculum) A Christmas Carol and Alice In Wonderland, and you only have room for two plays written in the past generation; Almost, Maine and Peter and the Starcatcher … that last an adaptation of Peter Pan.

Gregg’s point is not to put down the works of the past, or to place some kind of moratorium on Shakespeare (as some have suggested) or the works of Kaufman and Hart. One of the most basic disconnects between today’s professional stage and its high school equivalent is that economics have driven playwrights to create plays with small companies, where your average coach needs to cast as many kids as possible.

There is an opportunity here, for aspiring writers to create new works, geared towards the needs of your average troupe of teenage thespians.

My eldest is a high school freshman, and though I have roped them into performing a few ten-minute plays at Pandemonium, they have only this weekend performed in their first complete play -- a performance of 10 Ways to Survive the Zombie Apocalypse by Don Zolidis. This one-act play (it clocks in at about thirty minutes) is one of the most-produced short plays in America.

In fact, if you peruse the list of popular short plays, there is a much wider variety of contemporary work (including This Is a Test by none other than Stephen Gregg) several of which satisfy one of the needs described by Gregg, that works for high school stages should have many characters, and that these characters should be largely teenagers.

But that last point, however, leaves me unsatisfied. While it is true that classic plays can seem dated (obvs, how can it be classic if it ain't old) and designed to keep the manufacturers of spray-on gray hair color in business, the act of playing is the art of being someone else. And producing period work, if executed properly, can be an education in history, class, race, and much more.

We did a contemporary play when I was a junior in high school, Runaways by Jay Christopher (not the musical by Elizabeth Swados) about a shelter to keep kids off the street. But I was relieved to be cast as director of the shelter, and not as one of the teenagers. I already was a teenager. I wanted to be someone else.

So, why not have both? My recently published adaptation of Agatha Christie’s The Secret Adversary features two plucky protagonists barely in their twenties, and a variety of colorful characters who are not necessarily any specific age. It’s a large-cast show with thrills, comedy and romance. Also, you get to learn about the aftermath of World War One and the sinking of the Lusitania. Wins all around!

I agree, it is bizarre that one play in particular, You Can’t Take It With You, has remained on the most-produced list pretty much since the rights were made available. This, in spite of an increasingly long list of references which have faded from collective awareness and, of course, the problem with Donald and Rheba.

Heck, that was the first play I ever performed in, when I, too, was a high school freshman. And I have had colleagues speculate that certain plays and musicals remain in rotation is precisely because high drama directors did those shows when they were in school.

My recommendation would be equal parts of each; that drama directors should dig deeper into the classical repertoire, and produce and promote new work by contemporary playwrights.

Speaking of which, The Secret Adversary is available from YouthPLAYS.

One of the happier surprises last year was Entry Point at Cleveland Public Theatre. When they proposed the idea of inviting audiences to attend a weekend of short scenes from new works, unfinished works, only recently started works -- and then provide feedback, I was skeptical. Who would want to see that?

A lot of people, as it turned out. Better than that it was amazing, exciting, adventurous, like a miniature fringe festival all in one building on a frigid winter’s evening. With free beer!

My participation was as a performer in someone else’s new work, work that has moved into the Test Flight phase (story for another time, perhaps) and also as an audience member. I also got to enjoy the experience from the point of view of my (then) eleven year-old son, who really enjoyed all the different works he experienced, as well as hanging out and having soda pop in the temporary yet cozy lounge that had been created in the downstairs “storefront” space.

Also, and perhaps most importantly for the writers and creators, each brief scene concluded with a strictly moderated feedback session which provided the kind of audience response that was direct and, so it appeared to me, extremely useful.

So, of course, I wanted to get involved this year as a writer.

But not alone. So much work I witnessed last year was collaborative; collaboratively written or devised, with movement and music. I can write a play, host a reading, take notes, edit and move forward. What would justify participation in this unique and uniquely visible process of creation?

Collaboration, of course. To that end I entered into this process with a partner. For a couple years now I have worked with Chennelle Bryant-Harris; she directed one of the scenes for our immersive Love In Pieces, she directed me in a refreshingly new performance of I Hate This, and I directed her in Twelfth Night (As Told By Malvolio).

Now we co-write. And I am so glad. 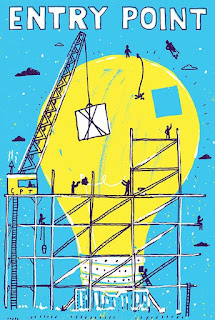 I am glad, not least of which reasons is because the material is dark, and plunging into a world of paranoia, hate and violence is not an adventure I wanted to wade through alone.

And where are we going? What is this dark material? What is The Lost Diary? Yeah, we’ll get to that.

It’s enough today to report who I get to work with, which includes Kelly Elliott as our director and two splendid actors, Bianca McElroy and David Obney.

Now here’s the thing; right after out first rehearsal, my co-writer, director and I headed to the bar next door to the theater to talk. What happened, exactly? What was the incident? Why was he found like that? Who is she? There is a mystery, and we don’t know the end yet but we were actively figuring it out.

On Sunday, Chennelle and I met for coffee and bagels and hammered out even more of the history. What was the plan, and what is the goal? Traditionally, this is a discussion I have entirely in my own head. It was like a whole new world.

One rehearsal, and we have picked up the writing from where we left it when we handed the Entry Point rehearsal draft to Kelly. It’s not even work that will be performed next weekend, but that’s the thing, we’re not even waiting for the event to move the script forward, the work is already continuing.