The Wreck of the Edmund Fitzgerald 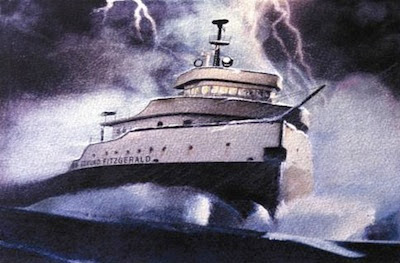 Even on the banks of the largest fresh water lakes in the world, Cleveland has an inferiority problem. Erie is the smallest of the five major Great Lakes, and the shallowest. But great it was, even if it was in series ecological peril in the mid-70s.

Cleveland remained an important port in those days. My grandfather was in the merchant marines before he had children and settled for a desk job at Cleveland Trust. And even after sailing the world, he always insisted Lake Erie was the roughest, most dangerous sea of them all. 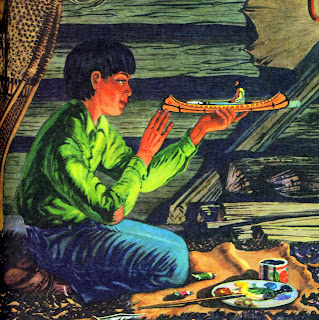 My education of the map of the Great Lakes began with Holling Clancy Holling's 1941 classic Paddle-To-The-Sea, the story of a First Nations boy, living north of Lake Superior in Nipigon Country, who carves a small wooden canoe with "Indian" and sets it on a journey to, hopefully, makes its way though all of the lakes and out to the Atlantic Ocean. In fact, it is not the story of the boy at all, but of his wooden "paddle person" who he names Paddle-to-the-Sea.

Another powerful image of the Great Lakes from my youth is that modern sea-dirge, Gordon Lightfoot's The Wreck of the Edmund Fitzgerald, released in August 1976 on the LP Summertime Dream.


The legend lives on from the Chippewa on down of the big lake they called Gitche Gumee.

The opening chords are still chilling to me. Providing the ancient name for Lake Superior gives the tale an historic, epic tone.

The lake, it is said, never gives up her dead when the skies of November turn gloomy.

Now I'm thinking of pirates. It resonates like an old sailing tale, but with familiar place names like "Wisconsin" and of course, "Cleveland."

And thank you, Mr. Lightfoot, for making the word Cleveland sing so clear and crisp during an era when it was more often used on The Tonight Show as a punchline.

The storm whips up, and man is helpless against the elements. It could have been anyone. It could have been my grandfather. 29 sailors perished about the S.S. Edmund Fitzgerald on the night of November 10, 1975 and, inspired by a Newsweek article on the tragedy, Lightfoot had written the song before the end of the year. It reached #2 on the Billboard Hot 100.

The "Mighty Fitz" had been launched in 1958 and was at that time the largest freighter on the Great Lakes. Its main cargo was taconite -- iron ore, "26,000 tons or more" -- though it was fully-loaded from Duluth and headed for Detroit, not Cleveland, when the witch of November came stealing. "Big Fitz's" final communication came minutes before it sank, at 7:10 PM when Captain Ernest M. McSorley reported, "We are holding our own."

Steven Dietz wrote a play about the wreck called Ten November but if it's been performed in the Cleveland area, I have no clue. Someone should get on that.
Posted by pengo at 9:33 AM