The Book of William (How Shakespeare's First Folio Conquered the World) 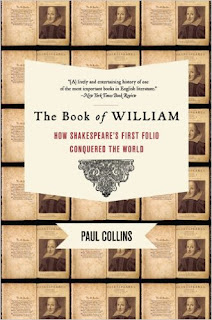 Following a performance of The Secret Adversary at a local school, one of the students remarked that she, “enjoyed that it was easy to follow ... and was not Shakespeare related.”

Indeed. Working backwards through the previous three years we have presented original works about the Globe Theatre (The Great Globe Itself), inspired by a speech in As You Like It (Seven Ages) and a prequel to Much Ado About Nothing (Double Heart.)

My work as a theater artist has been inextricably tied up in the works of Shakespeare. Apparently this is not the case for American theater artists, generally. This is made painfully obvious to me every time we hold auditions. College graduates stick the landing with their contemporary monologues, their verse is often not even memorized.

How did I become one of those Shakespeare people? In eighth grade Mrs. Carson assigned Macbeth which I really enjoyed reading. We read it, we did not watch a video.

(Side note: My father had recommended at that time that I also read James Thurber’s "The Macbeth Murder Mystery." It’s a hilarious short story which is funny only if you’ve read the play, which made me feel once again too damn clever for middle school.)

My high school at that time was passing out of a golden age when they actually had quarter classes in specialized subjects. Now you might take a year long course called Honors English Lit or something. I had the opportunity to take Death Perspectives and Journalism, there was a course on The Bible as Literature, and both Shakespearean Comedy and Shakespearean Tragedy.

Chuck Millheim taught those last two my senior year. I took both. By that time I had already been introduced to Shakespeare on stage; my parents took me to see The Tempest in the new Bolton Theatre at Cleveland Play House, soon after the high school attended a student matinee of A Midsummer Night’s Dream at Great Lakes Theater.

Those plays were covered in Millheim’s courses, and also The Taming of the Shrew, King Lear and Hamlet. For Hamlet we were treated to the audio version of Richard Burton’s portrayal. Picture if you will, a room of high school seniors listening to an audiobook version of Shakespeare. It’s awful, right? Heads on desks all over the room. Me, I loved it. Burton was my first Hamlet, and it is because of him I know the manner in which Hamlet is funny.

(Side note: We were required to memorize “To be or not to be.” This was no big deal for me, because I am an actor. I scheduled my time to meet with Millheim before classes, and rattled off the soliloquy in short order, and watched as he gave me an A for my recitation in his grade book. I also noticed he gave one of the football players an A+. When I pressed him for how that guy got extra credit, Millheim said bluntly, “He performed it. Very well.”)

When it was announced that Romeo and Juliet would be a mainstage production my junior year in college, we were suddenly learning Shakespeare. Verse and how to interpret and speak it. We had not received any such instruction until then, and suddenly it was all Shakespeare, all the time. Senior year came the Stratford trip, with master classes from RSC members and numerous performances (including a King Lear featuring then-unknown to American audiences Ralph Fiennes as Edmond and Alex Kingston as Cordelia) and “suddenly” I was one of those guys for whom everything comes back to William Shakespeare.

This summer something monumental is coming to Cleveland, and by that I am referring to a copy of Shakespeare’s First Folio, and not that other thing that is happening, though they are not merely coincident, as I will explain.

To celebrate the Stratford Man’s 400th death anniversary (which is not that odd, we celebrate Elvis Presley’s death, too; also, Jesus) the Folger Library in Washington created First Folio! The Book That Gave Us Shakespeare, a yearlong celebration in which they will loan a copy of the First Folio to every state in the Union in 2016. The Folger owns 82 copies, so it is possible for numerous sites to display them at once.

(Side note: If there were ever a political convention in which those in attendance might set fire to a library, this would be it, but the Folger didn’t know that when choosing the date.)

We haven’t yet announced Great Lakes Theater’s contributions to these events, but we do have several exciting projects in the works and you will want to participate in them. 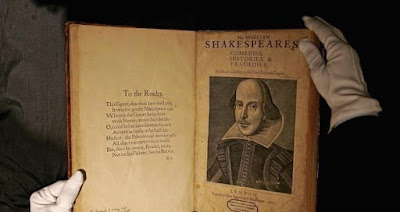 Last week I spied his copy of The Book of William (How Shakespeare's First Folio Conquered the World) by Paul Collins in his office and took it with me. In brief (it’s not a long book, either) Collins describes the origins of Shakespeare’s First Folio (also the Second, Third and Fourth) which is to say not only how it came to be printed but how it was printed, how the First managed to survive its first hundred years (for example, the Great Fire of 1666 destroyed almost every copy that hadn’t been bought and taken out of central London) and its estimable journey from yesterday’s news to the most expensive book on earth.

G.B. Shaw coined the term Bardolatry to mock those who attempt to deify Shakespeare. Shaw felt his work equal to Shakespeare’s and he is certainly entitled to that opinion. I agree that far too much emphasis can be put on Shakespeare the man when attempting to understand the work. What I cannot abide is the invention of biography for Shakespeare of Stratford in attempt to expand upon his legacy. Most of what people think they know of Shakespeare is apocryphal, the fact is we do not know.

But that’s okay. We have the most important part of him: this big, fat book, which, if it had not been printed in 1623 we would not have any text for Macbeth, Twelfth Night, The Tempest and fifteen other of his plays. They would for, all intents and purposes, not exist.

When Great Lakes' slate of events are announced, I hope you make time to join us for a workshop or a performance. There are a lot of folks who would just as soon not venture downtown during the Baby Elephant Walk this summer, and I understand that, too.

The Secret Adversary: In Review


Yes, it has been over a month since my last entry. These things happen. However, for years I have posted updates about the outreach tour and how it is progressing. Unfortunately, I attended only two performances of this year’s play, my adaptation of Agatha Christie’s The Secret Adversary, before the sudden death of my father.

Family business and my own sense of disorientation and mourning kept me from the show for a week. Lisa and I were going to host and moderate the performances equally, and thankfully she was able to take all of them instead, in my absence.

As it happened, the afternoon performance at the Cleveland Sight Center occurred just when each of my brothers were in town, and the day before my father’s memorial service. We all attended together. My brothers have never before been in the audience together, and with me, for something I have written.

Not surprisingly, The Secret Adversary has been very well attended. The name “Agatha Christie” remains popular. Christie’s works are the third best-selling in the world after the Bible and Shakespeare.

We had to turn numerous people away at Clague Playhouse when all seats were taken, though a dozen or so stayed to watch the large video screen in the lobby that showed the performance. It was standing room only in Lakewood, but no one was required to leave.

Those turned away are no doubt disappointed, and post-show evaluations give certain audience members the opportunity to complain about crowded conditions or having to sit in the back. (Did I mention it’s free?) However, the overwhelming reaction to the production is very high.

"The script was outstanding - this was a great adaptation!"
- Kendal at Oberlin audience member

“I really, really, really loved this play. I very much enjoyed the actors and actresses, the theme, the dialogue, and the ending scene was just beautiful.”
- Student, Hudson Middle School

Friday afternoon we performed in the new Cleveland School of the Arts building, in their “Black Box” space. Over 150 students in attendance, and they were wonderful, leaning forward, hanging on every word, getting every jokes, gasping at each revelation. After the show, their questions were all processed-based, about character, accents, physicality, even about the writing, adapting a novel into a play.

There will be a performance this afternoon in Cleveland Heights, which is home base for me. There are only three more public performances before we close, in Oberlin, Akron and Lorain.

The Secret Adversary opened on February 16, my mother's birthday. She and my father were in attendance, he was always a great reader and very fond of mystery novels and he provided and suggested numerous books that I used for research. And basically made me a person who would want to adapt a novel by Agatha Christie into a play. He enjoyed the show.
Posted by pengo at 9:49 AM No comments: