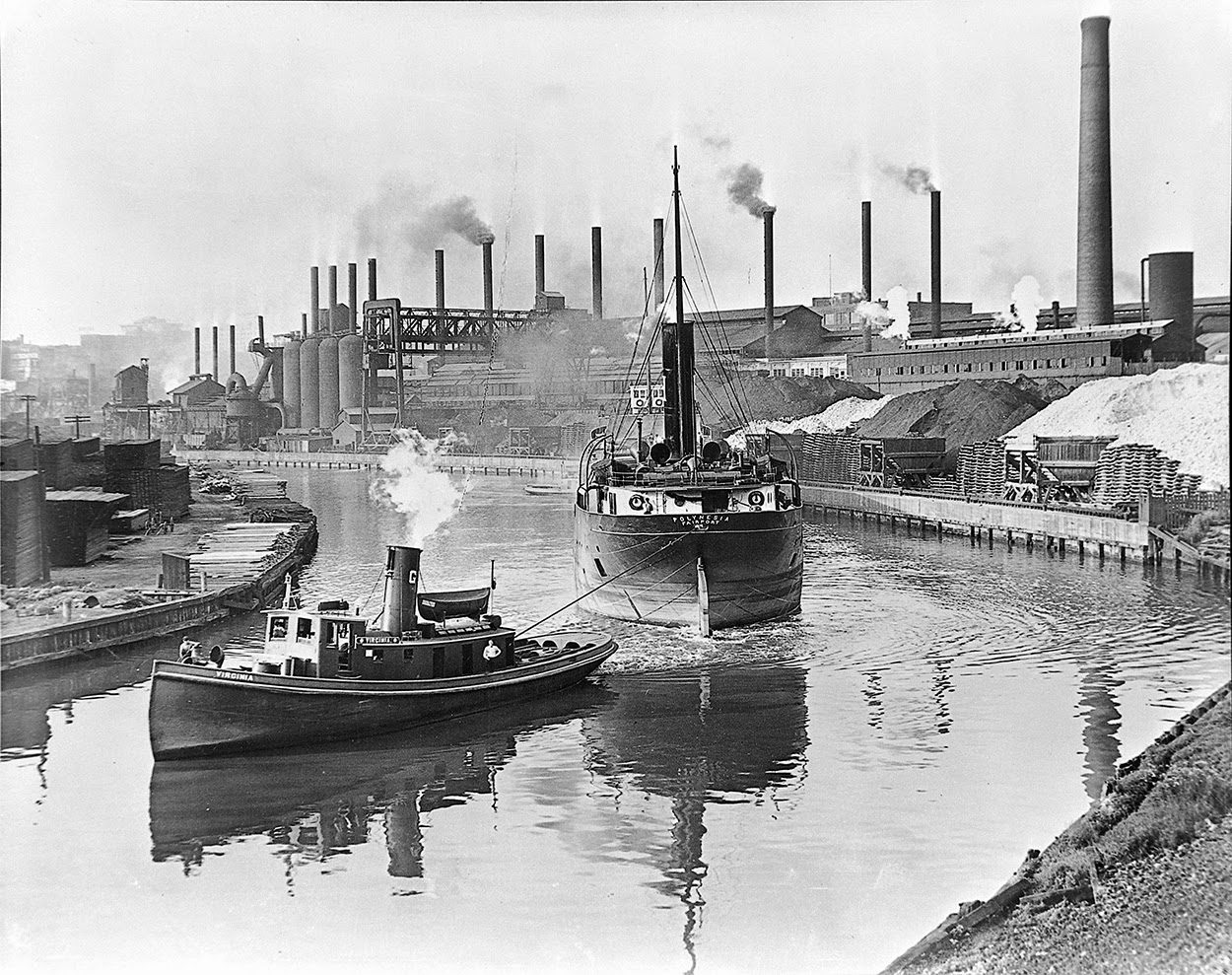 Fire On The Water continues through February 14
Posted by pengo at 8:21 AM No comments:

The Great Globe Itself: Costume Fitting

The Great Globe Itself takes place onstage, on one stage, on the stage of the Globe Theatre. However, not just one Globe Theatre, but three. Our performers are in and out of costume during three time periods - the early 17th, 20th and 21st centuries. So there are costumes, and costumes on costumes. 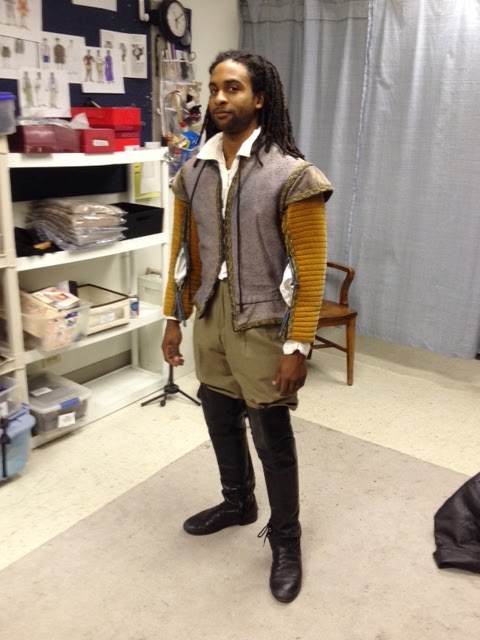 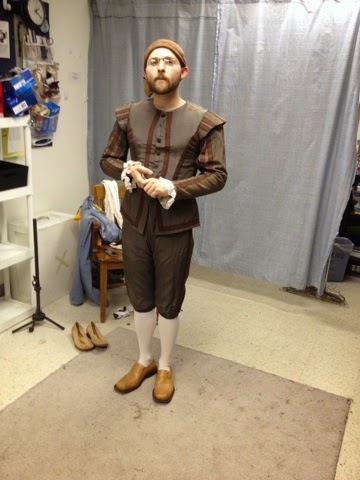 Turning to 1936, Esther has reproduced the early 20th century idea of what Americans thought a Shakespearean production was supposed to look like. King Henry VIII (left) is dressed sumptuously, but his guard (right) looks like he has been drawn from a deck of cards. 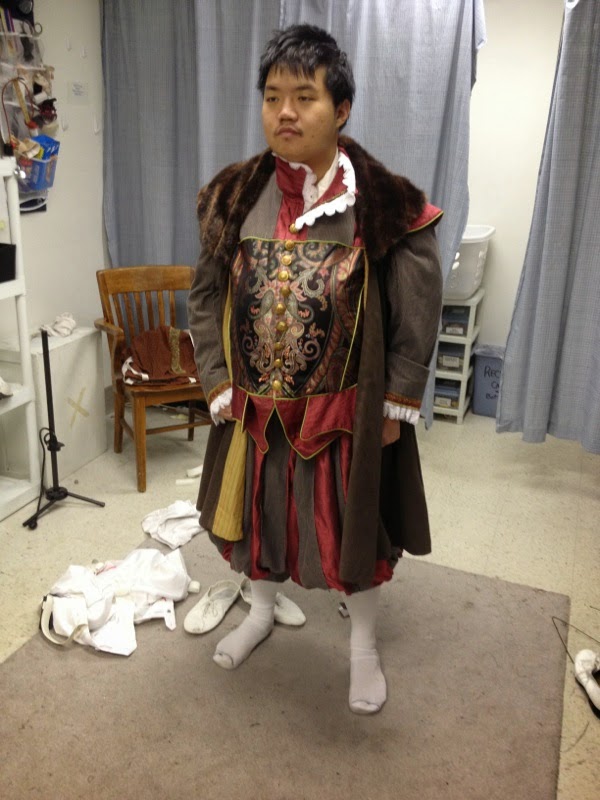 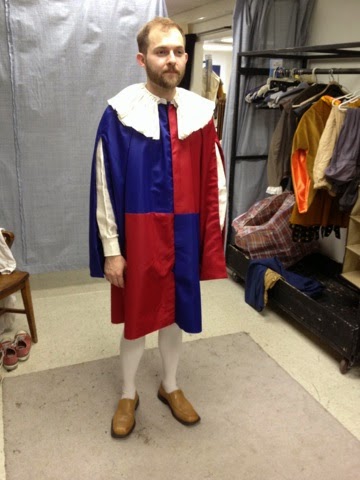 The virile Mark Antony is decked in a breastplate out of something like the silent film version of Ben-Hur. 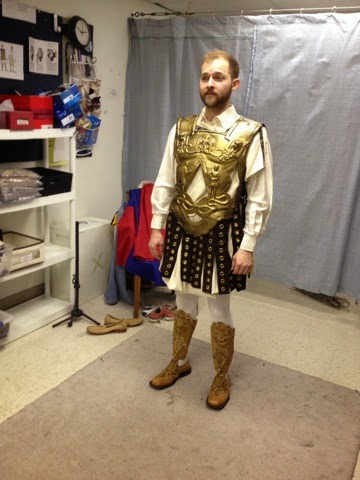 In our modern era, when we freely adapt our Shakespeare any which way, our Prospero has been provided a flowing wizard's robe, in white white white. 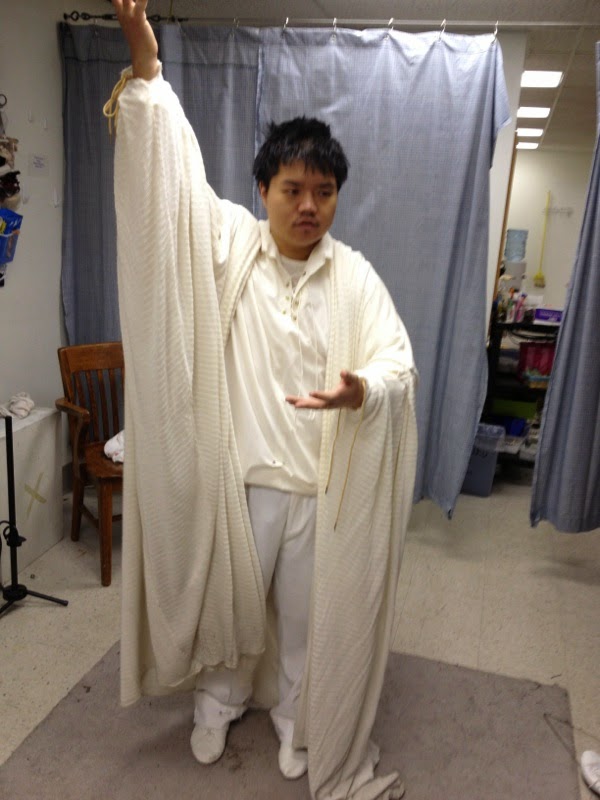 Finally, the performers our performers play, when they are not performing the plays within the play, appear in period street clothes (left to right, 1936 and 2005). 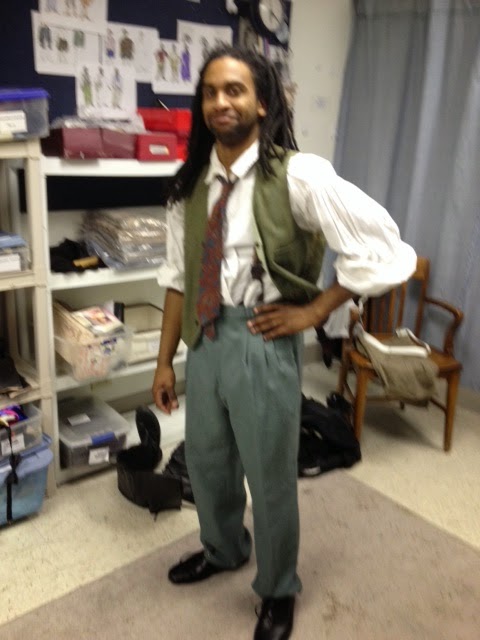 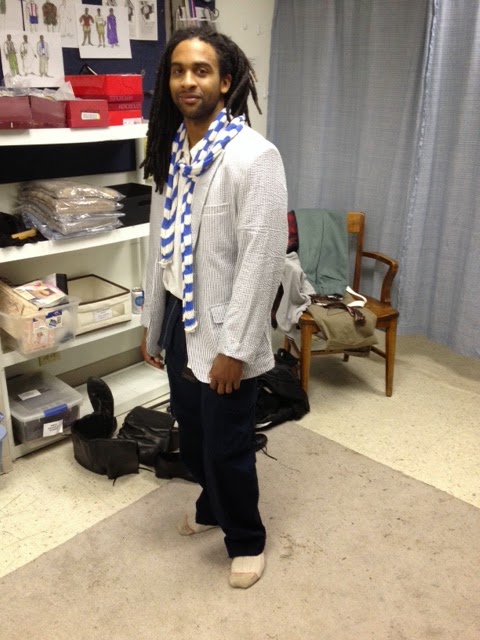 Tonight our acting company will have its first complete read-through of the script - rehearsal don't even begin for a couple of weeks. And yet, this is how far out ahead Esther is with her work on the production. Doesn't it all look amazing?

The Great Globe Itself opens March 3.
Posted by pengo at 12:07 PM No comments: Late January 1978, the Great Blizzard. Children, sit down. Let me tell you a story.

That was my fourth grade year. I was the age my son is today, about nine and a half. The previous year was the first I came into awareness of the wider world. Prior to that I did not really know much about pop culture or politics. 1977 was Three Mile Island, the New York City Blackout, the space shuttle Enterprise and Star Wars. Groucho Marx, Bing Crosby, Elvis Presley and Charlie Chaplin died that year, and I already knew who they all were.

That was also the year I started listening to pop radio, pretty much non-stop. January, dark evening after dark evening, and for many snow days, listening to G98. The top charting hits of that month, they may make you think of many other things, but they make me think of unending snow, and bone-penetrating cold; We Will Rock You/We Are the Champions, Come Sail Away, The Name of the Game, Just the Way You Are, and the aptly-named Slip Slidin’ Away.

We all stayed in our houses during the blizzard itself, but the after-effects lasted for weeks. Fortunately, my best friends lived two short blocks away, there was indoor play, but with so many days off, much of the time was spent at home, on my own, watching TV, drawing cartoons … and driving my mother crazy.


Mother was a home maintenance expert, or what we used to call a housewife. And she had her own life, one which my houseboundness encroached upon. I have no idea what my brothers, aged 13 and 16, were up to or where they were. The middle and high schools were also closed, but they were independent enough to have conspired to get away with the assistance of friends and older friends.

Mom had art appreciation classes at CMA, and asked if I wanted to wander around the art museum while she was there. Can you imagine that? Nine year-old kid, wandering around an art museum entirely unattended. In the 1970s, that was a great premise for a YA novel. Today we’d be the lead story on FOX 8.

Gets better – I didn’t want to investigate the art museum, I was more interested in the Natural History Museum. So I wandered around that place unattended, for several hours. Taxidermy is the aroma of my childhood. 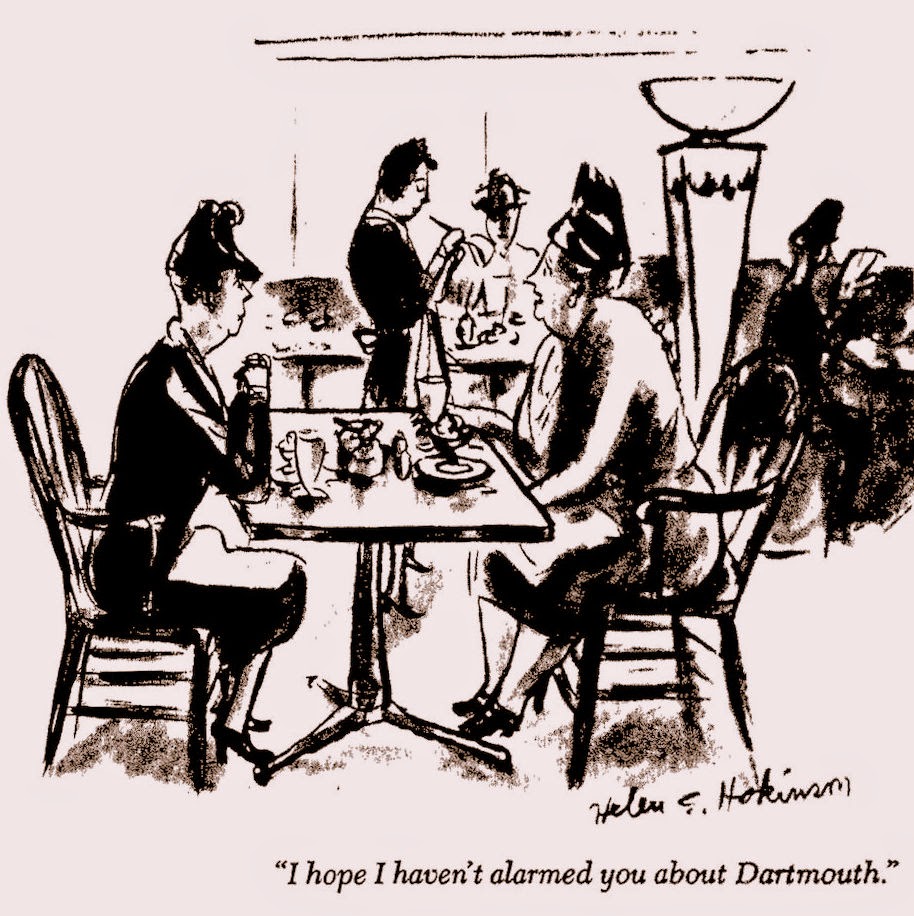 There used to be an exhibit documenting the effects of pollution, located near the entrance to the building. It was very upsetting, a replica toxic waste site, a dump with oil covered gulls and all manner of household product containers wrapped in discarded plastic bags, choking a freshwater pond. Thank goodness that exhibit isn’t there anymore to trouble my thoughts.

Other days, mom would have classes at the Lakewood Public Library, and I would haunt the microfilm desk, taking out spools and spools of the New Yorker, just to look at the cartoons. Not just any New Yorkers, mind you. I started in 1925.

Of course, it wasn't all about keeping me preoccupied when she had other things to do. We'd sometimes go to the Rocky River Rec Center, and hold hands and ice skate while they played Bob Seger's Night Moves album on the loudspeakers.

My mother turns 80 next month, and it makes me think of things like this.