On The Air
by George E. Condon
The Plain Dealer, August, 1954

King of the Moondogs Quits WJW

The spectacular career of Disk Jockey Alan Freed, who has reigned on Station WJW here as "King of the the Moondogs” for three years, will begin a new phase next month, when he shifts from the Cleveland station to Station WINS in New York.

Billboard reported the Cleveland disc jockey's move "may involve the biggest sum of money ever paid to a rhythm and blues jockey by an independent radio station."

Freed has enjoyed a meteoric career in Clevelabd radio and television. He came to this city from WAKR, Akron in April 1950. In July 1951 he began the late-hour "Moondog" program over WJW. When the disc jockey staged a "Moondog Ball" in Clevelabd Arena in March, 1952 a near-riot ensued. A crowd estimated at 25,000 showed up and the Arena's capacity is about 10,000. It took a section of the Cleveland Police to restore order.

The "Moondog Show" would continue on the Cleveland station with another disc jockey, although it was possible the station would buy Freed's program out of New York.

The disc jockey’s career here nearly ended in tragedy in April 1953. He fell asleep at the wheel of his car in the early morning hours, after work, and the car crashed into a tree in Shaker Heights.


Source: The Plain Dealer
AlanFreed.com
Posted by pengo at 10:03 PM No comments:

In 1954 the television program Superman was in its fourth season - but the first IN COLOR! Sponsored by Kellogg's and starring George Reeves, with color came a softer touch to the storylines, not exactly campy but harmless. Villains never died anymore, and when bullets were fired, they were only fired at the Man of Steel.

Meanwhile, Superman creators, the pride of Glenville High, Joe Shuster and Jerry Siegel, were still scraping by as hired guns of the industry. They were receiving absolutely no royalties from this popular and lucrative television program.

In 1954 the salacious crime booklet Nights of Horror emerged, a small, plain brown-wrapped affair, something you could get arrested for peddling at that point in history. The work was anonymous, but the images were familiar ... 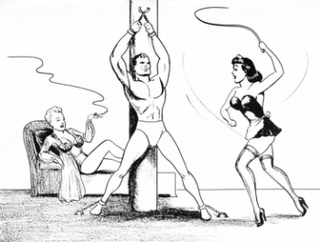 I will come right out and say it -- that's the Last Son of Krypton getting worked over by Lois Lane while Lana Lang sits back and enjoys the party. This picture is actually one of Shuster's more tame works from this particular magazine.

Night of Horrors ran for sixteen issues. During the 1954 comic book hearings of the United States Senate Subcommittee on Juvenile Delinquency, this title was singled out as a prime motivator for the Brooklyn Thrill Killers, a gang of Jewish Neo-Nazis (you heard me) who killed two men and tortured several others. When these boys, all teenagers, were asked where they got their ideas or what they read, they all said "comic books."

And there you have it.

Elizabeth Taylor on "What's My Line?"
November 14, 1954
What's My Line? was a CBS program, which means this particular broadcast would have been seen in Cleveland on WEWS Channel 5, which was a CBS affiliate until 1955.

WEWS was Cleveland's first television station, only the 16th in the nation, and went on the air December 17, 1947. The calls letters come from the original owner, Edward Wyllis Scripps. WEWS was the flagship station of the Scripps-Howard Broadcasting Company, who headquarters were located behind the Sterling-Linder-Davis Department Store.

(I'm back. Subject matter may stray from Cleveland, because I am trying to get into the funny. So here we goes.) 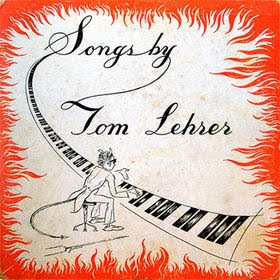 Thomas Andrew "Tom" Lehrer (born April 9, 1928) is America's greatest living satirist. In the 1950s he sang and performed songs for the piano which were entirely inappropriate in mixed company, without using a single smutty word. He spoke truth to power, decimating hypocrisy wherever it lay, which he found everywhere. He also taught me the difference between long and short vowels:


Tom Lehrer is not to be confused with Mark Russell, who has never been controversial, nor funny.

In 1954 Isaac Asimov claimed to have visited a nightclub in Boston where he caught Lehrer's act. It was worth recording in his autobiography that one of the songs performed was I Got It From Agnes, a sprightly little number about VD.


"I haven't gone to nightclubs often, but of all the times I have gone, it was on this occasion that I had by far the best time." - Isaac Asimov

The compositions on this album (which he recorded in one hour) include the songs I Wanna Go Back To Dixie, My Home Town, and I Hold Your Hand In Mine, which respectively cover issues of racism, pedophilia and necrophilia, as well as Be Prepared which helpfully instructs young Boy Scouts to pack condoms ... though of course he never comes right out and says that. Most of these songs were recorded for his live album Revisited in 1960.

"Mr. Lehrer's muse is not fettered by such inhibiting factors as taste." - The New York Times

"He plays the piano acceptably." - The Oakland Tribune

Later works became appreciably darker, stretching from simple grotesquery to a fixation on the nuclear arms race -- see: So Long, Mom (A Song for World War III), Who's Next and We Will All Go Together When We Go.. With copies of his work lying around my house growing up, Mr. Lehrer is yet another contributor to my generally cheery disposition.

Like all funny people, Tom Lehrer was born and raised in Manhattan, and he's Jewish.

Is there a Cleveland Connection? Sure.

Tom Lehrer played Korman's Back Room in 1957, and on April 4, 1959 at The Hanna Theatre, where rumor has it the cover photo from his album An Evening Wasted With Tom Lehrer was taken.

So there you go.

UPDATE: Tom Lehrer (age 92) has released his lyrics into the public domain!
Posted by pengo at 5:10 PM No comments: