It happened last month in a cottage in Yalding, England, where I received an email from Beth Wood at Cleveland Public Theatre, asking if I would like to perform the stage adaptation of The Santaland Diaries by David Sedaris and Joe Mantello.

For several years now, CPT has produced this holiday favorite. The Santaland Diaries is one of the most produced plays in America, and has consistently been for over a decade, so much so that American Theatre magazine has stopped including it in their annual list of most-produced plays.

Actors who have played the role in Cleveland include Ray Caspio, Doug Kusak and (for Bad Epitaph) Curtis D. Proctor.

I was excited to have been asked. So, I have spent the past several weeks rehearsing with director Eric Schmeidl, who played the role of "Crumpet the Elf" himself for CPT three years ago. I love working with Eric, who has previously directed me in The Velocity of Autumn at Beck Center, and Night Bloomers for Dobama.

When I first announced the production and my place in it on Facebook the other day, I was delighted by the strong and happy response. I was inspired to put out a call for questions, because folks were so curious about my finally playing Crumpet the Elf. Here are my responses.

Q: Explain the juxtaposition of tragedy and comedy in this this line; "Today a child told Santa Ken that he wanted his dead father back and a complete set of Teenage Mutant Ninja Turtles. Everyone wants those turtles."

A: Actually, Donald, I think the line speaks for itself. The line you should be asking about is; "I am a thirty-three year-old man applying for a job as an elf," and how exactly I am going to play that when I am certainly long past thirty-three.

For this production, and in fact when Eric himself performed the role in 2014, there is a set piece which makes it clear this play takes place in the past -- 1989, to be exact -- and that we are treating it as a memory play.

When first produced in Cleveland at Bad Epitaph Theatre in 1999, we tried updating the line you ask about. The boy wanted Pokemon cards. When I directed the show at Beck Center in 2002 the boy wanted a "SpongeBob SquarePants BackPack. Everybody loves SpongeBob."

You have to admit, "Everybody loves SpongeBob," is a funny thing to say. But now we leave the line as is.

Q: Have you seen David Sedaris in person and what did you think?

A: Good question, David. Sedaris read at the Ohio Theatre in 2000 when he was promoting his collection of essays "Me Talk Pretty One Day." He was on a certain medication and at one point had to ask the audience if it was all right to take a much needed pee-break, and we all thought that was fine.

It is perhaps because of these stage experiences that, while I had a few concerns about whether to accept the offer, actually being able to perform the piece wasn't one of them. I have at least that much ego.

Performing someone else's story, especially one as lighthearted as this, is particularly liberating. I just need to say the words and it's funny. Sedaris is really good that way. But it is also a thrill channeling my own feelings through the words. I don't have to play a character. Just as with those other solo plays, I still get to be myself.

Q: How did you levitate that box (see photo)?

A: Well, Carolyn, how do you know that box is not slowly floating down into my loving arms, like a drunken cherub?

Q: Have you ever actually worked in a retail store during the holiday season?

A: Thanks for asking, Nina, though your use of the word "actually" makes me a little defensive.

I am happy to report that almost every Christmas season since 1991, I have been employed by one theater company or another. This means my holiday contributions to society have included productions like "Stealing Christmas" (Karamu 1991), "The Wayward Angel" (Bad Epitaph 2000), "Adventures In Slumberland" (Talespinner Children's Theatre, 2013), educational programs surrounding Great Lakes Theater's annual production of "A Christmas Carol" and that Yuletide favorite, "Simpatico" by Sam Shepard (Dobama Theatre, 1995).

However, during my college years I had several holiday jobs in mail rooms, wholesale outlet stores, performing data entry, and packaging and labeling volatile chemicals. I have also had my turn as a server at several restaurants, but have never "actually" worked retail during the holiday season.

Q: What's with the knickers?

A: Yes, Halle. The knickers are satiny and very comfortable.

A: The Outcalt Theatre at Playhouse Square, 1407 Euclid Avenue in Cleveland, Susan! See you there!

(Many thanks to Blayne, Bob, Carolyn, David, Donald, Halle, Nina, Phil, and Susan for all the great questions!)

Cleveland Public Theatre presents "The Santaland Diaries" at the Outcalt Theatre in Playhouse Square, December 6 - 17, 2017
Posted by pengo at 3:12 PM No comments: 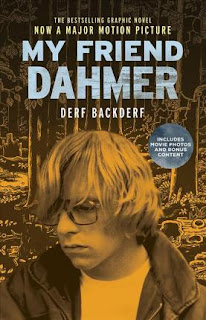 Local comics legend Derf (see: The City) composed a cartoon memoir of his high school years in the late 1970s and his association with serial murderer and cannibal Jeffrey Dahmer.

That book, My Friend Dahmer has gone on to international acclaim, been translated into a several languages, and on Friday a motion-picture adaptation starring Ross Lynch as Dahmer goes into general release.

Derf has been and will be accused of cashing in on a horrific tragedy, but that charge can more reasonably be made of previous made-for-TV films which capitalized on the gruesome and inhuman acts performed by Dahmer during the years of his crimes. This story has as much to do with the psychology of a would-be-but-not-yet killer as with the world which fostered his desires and compulsions, and provided the opportunity to make his fantasies come to fruition.

As one of the more self-pitying members of Generation X, I have loudly and at length whined about the disastrous effect the 1970s had on its children, when media was skewed entirely toward the interests of rising Baby Boomers. Our television programs and films churned out tales of easy sex, transient relationships, and graphic violence, while popular music dwelt on maudlin thoughts and liberal mores, and no one was looking after the kids.

Two months ago I surprised the wife for her birthday by taking her to a sold-out, pre-release screening at the Cleveland Cinematheque. I am excited for Derf, and hope My Friend Dahmer, the film, receives the attention I believe it deserves.

The film captures that late 70s mood without fetishizing it, as so many contemporary films do. The suburban torpor of a nation in decline, and the effect that has on its citizens, especially the young people is on full display.

Derf has often suggested that his book is an indictment of the adults who failed in their responsibility, providing no oversight, and in this way allowing a neglected, alienated monster to come to life. Dahmer may have been destined, either through fate or natural design, to become a murderous sociopath. But why did no one see the signs? 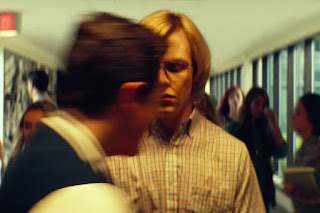 The screenwriter and director Marc Meyers made the decision not to employ a narrator. Derf comments on the proceedings in his novel through the use of captions, and in this way he himself leads us through the narrative. We are never alone with Jeffrey Dahmer. Without narration, Dahmer's increasing isolation from humanity (portrayed hauntingly by Lynch) is ours to witness in isolation.

It is this emotional connection -- not sympathy, which is feeling, but empathy, which is understanding -- that makes the final scene of the film so chilling. I won't spoil it for you. It's enough to say that in any other film, it would be moment of triumph, and of celebration. Our main character finally knows who he is.

And he is free.

"My Friend Dahmer" makes its Cleveland premiere at the Capitol Theatre next Friday, November 10, 2017.
Posted by pengo at 12:00 AM No comments: 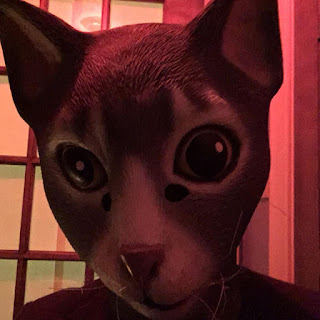 It has been two years since I wrote an assessment, which has been a useful tool to reassure myself that, in spite of any sense of inertia, the work continues.

Last week there was a reading of These Are The Times which was very productive, and when I have a moment I will be able to tweak a few things and then, if you can imagine, I will finally be able to begin the submission process. And it only took eight years!

Meanwhile, I composed a piece for Grand Rounds: Four 10-Minute Plays, which will be performed on December 6th at the Maltz Museum of Jewish Heritage as part of the exhibit Beyond Chicken Soup: Jews In Medicine.

Just yesterday I was a "Writer In the Window" at Appletree Books, brainstorming a writing collaboration with my colleague Chennelle which will make its formative debut in early 2018, and tomorrow evening rehearsals begin for a play I will be performing in, to be announced.

Basically, after months feeling a bit adrift, November is packed. Suddenly, I have no time. And you know what? That is a good thing. When I am pressed I am most productive, which is stupid but there it is.

What is not good is how I have almost entirely stopped exercising. Nerve pain has made working out this past summer less than fun, but the fact is I have not gone for a run in over a month. Seriously, October 1 was my last time out. I haven't run so little since 2011, when I was taking antidepressants.

But the kids are all right. My education work is meaningful and sustaining. What I most need is to (literally) get off my ass, and move.
Posted by pengo at 5:10 PM No comments: