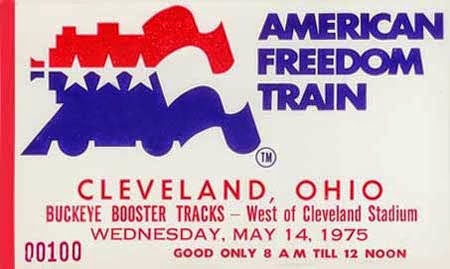 In the early 1970s a commodities broker and train enthusiast, Ross Rowland Jr., was concerned that the Bicentennial was approaching with little or no fanfare. The Vietnam War and the Watergate crisis had the nation in the grip of a malaise, and no one was feeling particularly patriotic -- or if they were, they were kind of aggressive about it.

To that end he worked to find corporate sponsors to fund a steam locomotive carrying 10 cars of artifacts central to America's history and identity. The red-white-and-blue engine dubbed American Freedom Train went from city to city, a traveling museum for families to enjoy in the run-up to the Bicentennial year. Rowland was inspired by a similar event in the late 1940s, also called the Freedom Train.

These displays included George Washington's own copy of the Constitution featuring his handwritten notes, clerical robes belonging to and worn by Dr. Martin Luther King, Judy Garland's Wizard of Oz costume, Joe Frazier's boxing shorts, and a moon rock. There were stops in each of the lower 48 states.

A pennant just like this one hung on my bedroom wall.

Seven million people boarded America's Freedom Train, and I was one of them when it was stationed just west of Cleveland Stadium from May 14-20, 1975. This is a hazy memory for me, as I wasn't yet seven, but I was aware it was a very special event. The attraction concluded on December 31, 1976 in Miami, Florida.

"President Ford strongly urged parents and teachers 'to make sure that your children and students take advantage of this wonderful opportunity.'"

Sources:
FreedomTrain.org
Wikipedia
Posted by pengo at 12:01 AM