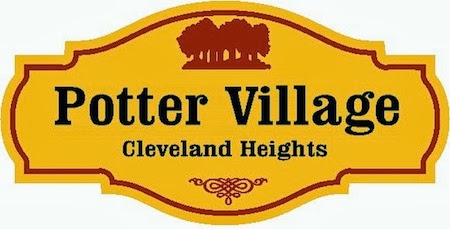 Potter Village is the neighborhood within the seven connected streets of Castleton, St. Albans, Boynton, Radcliffe, Haselton, Woodridge and Edison (in the area between Monticello and Taylor). The name “Potter Village” comes from the fact that this neighborhood was once the location of a large farm owned by a family named Potter.

Beginning in 1923, the area was redeveloped into a residential neighborhood. At that time, the developer described it as “one of the most beautiful sections of the Heights.” Nevertheless, the neighborhood was mostly unpopulated until the late 1930s and early 1940s.

Today, almost 90 years after the establishment of the area as a residential neighborhood, these quiet tree-lined streets remain “one of the most beautiful” places in Cleveland Heights. - Jim Goodluck, Potter Village Good Neighbor Association

Potter Village is not to be confused with Forest Hill, that expanse of land between Cleveland heights and East Cleveland which was once the domain of John D. Rockefeller -- home of Forest Hill Park and the Historic Heights Rockefeller Building ... Speaking of which, have you been to Rockefeller's for a cocktail or an intimate dinner yet? You should.

Whenever I mention where I live, someone invariably asks if its part of Forest Park, and I have to report that no, I live adjacent to Forest Hill in the less-fashionable South Of Monticello District ... or "SOMO." That was before our neighbor Jim discovered the neighborhood already has a name.

In 2009 after the collapse of the housing market and just before our eldest was about to start first grade, my wife took it upon herself to put out a call to the neighborhood to have a block party. At that time there were foreclosed or abandoned houses two yards to our left, three yards to our right, two across the street and two on the other side of our backyard fence. We wanted to know who our neighbors were, and at that time we'd been here almost sixteen years and really didn't know.

It's two years later. Last weekend we held our third annual Castleton-Potter Village block party with all of our friendly neighbors and friends. All those houses I mentioned now have people in them. Our youngest starts first grade in a week. The world spins.