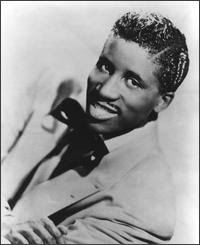 Jalacy "Screamin' Jay" Hawkins (July 18, 1929 — February 12, 2000) was born in Cleveland, Ohio. The man studied classical piano and like his idol Paul Robeson, Hawkins had aspirations to be an opera singer. Instead, Screamin' Jay created rock and roll.

Okay, maybe he didn't. But he was the first singer (fronting for Tiny Grimes) at the Moondog Coronation Ball at the Arena on March 21, 1952, ergo Screamin' Jay Hawkins performed the first rock show in history. Unless he wasn't, because no one can agree whether or not Tiny Grimes went on first, or if the show even got under way because it was shut down before the first note was played.

In 1956 Alan Freed suggested Hawkins arrive in a coffin before performing his hit record I Put a Spell On You, and a legendary stage persona was born, incorporating outlandish voodoo-themed costumes and stage props into his act.