The Pledge of Allegiance

The Pledge of Allegiance was written by Socialist Frances Bellamy in 1892. It read:


"I pledge allegiance to my flag and the republic for which it stands: one nation indivisible with liberty and justice for all."

It was published in a children's magazine on the 400th anniversary of the discovery of Christopher Columbus by the native peoples of the Caribbean. Frances wrote the pledge to 'inoculate' immigrants and native-born Americans against the potential for radical subversion.

Bellamy wanted to include the words "equality and fraternity" but in 1892 those rights weren't really extended to everyone, certainly not women or blacks, so he kept his pledge brief and to the point. Today the pledge is no longer brief, and the original point has been considerably twisted.

DID YOU KNOW ..? The original pose for appropriately pledging your allegiance to the American flag involved giving it what would be familiar to everyone as what we call the "Nazi" salute. During World War II, President Roosevelt declared a hand over the heart was more appropriate. Already, the pledge had moved from something suggesting American unity to something much more personal and individual.


There were those who had pressed President Truman to add the words "under God" into the religion-free pledge, to no avail. Finally, in 1954 President Eisenhower attended a church service on Lincoln's birthday, at Lincoln's church, in Lincoln's pew. The pastor, a Reverend Docherty gave a sermon which argued the Pledge of Allegiance could be said by the citizen of any country to their flag ... that something was missing.

Yes. Once again, once and always, God was missing from America. Something must be done. And so, on June 14, 1954 a joint resolution of Congress added the words "under God" to the pledge. 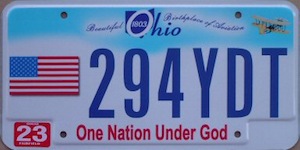