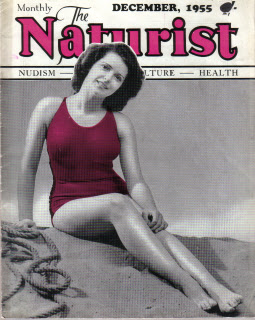 One afternoon in June, 1955 my father was downtown looking for a summer job. Picture a street teeming with men in hats, suits, skinny ties. On this date like so many others he may have ducked into Kay's on Prospect near East 6th Street.

Like so many of his generation, you could find Dad perusing "health" magazines espousing the life-extending benefits of nudism. He recently described to me on thought-provoking photograph of a young woman grilling in the rain, wearing only a waist-length slicker.

On this particular day in question, my father was having little fortune lining up any kind of summer gig. He eventually stepped around the corner up to Euclid and into the Cleveland Trust rotunda, and applied. For his efforts he was hired as an alternate teller and general dogsbody (his words.)

Later my grandfather reported his surprise when a manager approached him in the commissary a few days later to rib him about not telling him that my Dad was now working as a teller. My grandfather replied with equal surprise that he didn't know either!

Source:
Anecdotal Evidence
Read this extended report on Kay's, including more great stuff in the comments section.
Posted by pengo at 10:11 PM