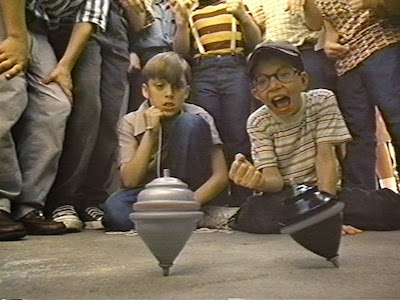 There's a lot of movie-making going on around town this summer. I am happy to say that some of it is taking place in Cleveland Heights. Like most cities these days, we can use the cash and I am getting a little irritated by the people griping about Coventry getting blocked off now and then to shoot scenes for Fun Size or I, Alex Cross. People, please.

The big story is The Avengers shoot, which began yesterday, downtown. I have a map on the corkboard in my office informing me off which streets are shut down when. I have a date for lunch on Friday, maybe we will head down the East 9th and Euclid and do some star-gazing.

Apparently they are making Euclid Avenue look like 42nd Street. Only, you know ... smaller.

There hasn't been this much Hollywood activity at one time since 1993, when we were host to not one but two big-budget films, Double Dragon

and the much-anticipated sequel to A Christmas Story.

Double Dragon was notable for its cost and calendar overruns, and Mayor White had to finally kick them out of the city as two weeks of blowing stuff up on the Cuyahoga turned into three weeks and then four.

As for that other film, I wrote a piece about that five years ago for Cleveland Magazine: 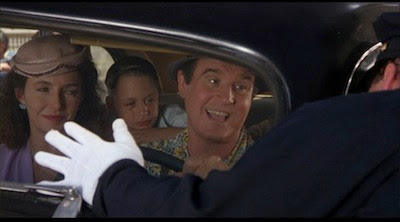 (Thirteen years after "My Summer Story" was filmed here and forgotten, one of the movie's extras rediscovers a so-so sequel in the shadow of its famous forerunner.)

Remember at the beginning of “My Summer Story” when the narrator remarks how sometimes events in our lives come and go before we realize how important they are?

Wait. Back up. You’ve never heard of “My Summer Story?” It’s the movie based on Jean Shepherd’s boyhood memories of growing up in Depression-era Northern Indiana. It was filmed here during the summer of 1993 and many Clevelanders, including me, took part as extras.

It was the sequel to the 1983 holiday classic “A Christmas Story.” I know you’ve heard of that one.

Last December, you couldn’t pop a Red Ryder BB gun without hitting some reference to “A Christmas Story.” From Big Fun to Flower Child, any shop that could justify it had a leg lamp glowing in the window. The Cleveland Play House presented a stage adaptation, some of the original movie’s supporting characters made a public appearance downtown and a California man announced his plans to turn the West 11th Street home featured in the film into a museum. Then there’s TBS’s annual 24-hour “A Christmas Story” marathon that has made the movie a holiday favorite no matter where you live.

So whatever became of the sequel? I don’t recall it ever appearing in theaters. I do remember seeing a full-page ad in Premiere magazine advertising its upcoming release in 1994. By then it had a new title: “It Runs in the Family.” Then nothing. Bupkiss, as they say.

When I recently stumbled upon the film again (restored to its original title of “My Summer Story” for its video release), I wondered why the movie had been so quickly cast aside when it seemed to have so much going for it.

It had not one, but two Culkins (Macauley’s younger siblings Kieran and Christian) in the roles of Ralphie and Randy Parker, as well as Mary Steenburgen as “Mother” and Charles Grodin as the “The Old Man.”

Like “A Christmas Story,” Bob Clark directed the movie and wrote the screenplay with Shepherd and Leigh Brown. And, like its predecessor, “My Summer Story” was filmed in Cleveland. In fact, most of it was shot here. People often forget that apart from the Christmas parade, scenes with Santa Claus and exterior shots of Ralphie’s house, much of “A Christmas Story” was filmed somewhere else.

But for a few weeks in August 1993, “My Summer Story” took over downtown Cleveland. My involvement was brief. I was just a warm body in a costume as part of the Great Lakes Exposition scene (the part of the film where Ralphie buys a “killer top” from a gypsy). It was an impressively large set spread over the plaza beside Key Tower. (Look for me behind the camels. I’m wearing an orange Hawaiian shirt. Don’t blink.) Other shooting locales included the Palace Theatre, Wilbur Wright Middle School off 117th Street and Lorain Avenue, the industrial Flats and a large part of Tremont.

NewsChannel5 anchor Leon Bibb (then working for another station) was doing a story on the shoot and also worked as an extra. We were in the Expo scene together, so he and I meandered and chatted a little in the baking summer heat of Mall C, behind the camels.

Cleveland theater legend Dorothy Silver was one of the few Cleveland actors whose name appears in the film’s credits. She was “Neighbor No. 4,” in case you’re wondering.

“We had this long, long, long night shot,” Silver recalls. “I had no context for the scene; we didn’t know what was happening. It’s the ultimate impotence for an actor.

“I had a line or two — some kind of shouting, angry line. Not what I want on my gravestone.”

Whatever she said ended up cut from the film.

Local actor John Galbraith was only 15 years old when he played one of the Parker family’s numerous “hillbilly” neighbors, the Bumpuses.

“There were a lot of people of Irish descent there, and we shot around 4 in the morning,” he remembers. “This one woman brought out folk instruments, and we sang Irish folk tunes and it was pretty fun. … It was very Cleveland, the togetherness, the shoot — everything about it.”

What’s unfortunate is that none of those warm feelings come across while watching the movie. “A Christmas Story” leaves us to imagine the Bumpus family, because we only see their turkey-stealing hounds. What we get in “My Summer Story” is a caricature of the Appalachian poor that was better left in “The Beverly  Hillbillies.”

“It didn’t have the charm the first movie had,” Galbraith says.

That’s a criticism I heard a lot while collecting people’s memories of “My Summer Story.” I felt the same way after watching it again with my 3-year-old daughter Zelda. For example, Charles Grodin says “son of a bitch” a lot for presumed comedic effect, while in “A Christmas Story” the old man’s cursing is a lot of mumbling nonsense that leaves us to imagine the worst.

There’s also a lot of stupid, cartoon-like violence in the movie. Getting your tongue stuck to a flagpole is funny. Getting shot in the hind end with your own Red Ryder BB gun (especially after receiving the legendary warning: “You’ll shoot your eye out”) and then howling in pain for a full minute? Not funny.

And then there’s the issue of Christmas versus summer. When the motion picture of the musical “Annie” was released in summer 1982, the Christmas ending was revised to a timely Fourth of July finale. I don’t care how patriotic you are. Is it “The Magic of Christmas” or “The Magic of Independence Day”?

Watching the whole thing again now, “My Summer Story” doesn’t seem worse than a lot of other nonsense I see on television. And there are a lot of sweet bicycling scenes, with Ralph and his pals Schwartz and Flick tearing all over Tremont. The opening is particularly promising, as Ralph’s teacher Miss Shields delicately gives him the third degree for a book report on a smutty novel. And the old man’s passive but earnest attempts to bond with his pre-adolescent son are truly touching.

No, “My Summer Story” isn’t terrible. It’s just not as good as “A Christmas Story.” And Kieran Culkin, who has grown into an interesting actor in films such as “The Dangerous Lives of Altar Boys” and “Igby Goes Down,” is not Peter Billingsley. The Great Lakes Exposition is not Higbee’s. A killer top is not a BB gun. Summer is not Christmas. And Charles Grodin is not Darren McGavin. Maybe they wanted to change the movie’s name because the film suffered so terribly in comparison to its predecessor.

In 1995 there was, at long last, a public showing of “My Summer Story” at the Cleveland Museum of Art. The film went down pretty well there, especially among the Bumpus clan.

“All the random extras, the nobodies, we enjoyed it,” Galbraith recalls. “It was very family-oriented, like ‘We’re the Cleveland people! We’re all Irish! We’re the Bumpuses!’ We were really a family.”