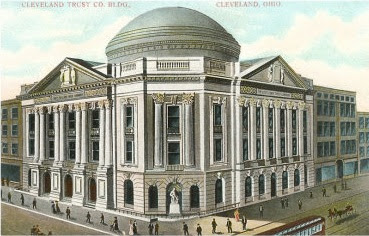 Founded in 1894, the Cleveland Trust Company opened its offices on the corner of East 9th and Euclid in 1908. By 1924 it was the sixth largest bank in America, with Harris Creech as its President. The company survived the Depression well.

The Cleveland Trust building (closed to the public since 1996) was designed by George Post and the famous rotunda features murals by Frank Millet. He and his assistants worked for a year to complete the 13 paintings, depicting the "rise of civilization in the Midwest." Millet lost his life in the North Atlantic in April, 1912 aboard a very large ship.

The stained-glass dome of the rotunda is 85 feet high and sixty feet across, and designed "in the Tiffany style."

For the record, Cleveland Trust employed my father, my grandfather, and my great-grandfather.

UPDATE 8/28/2015: The Cleveland Trust Building was destroyed in the Battle of New York.
Posted by pengo at 9:53 AM