I can’t even determine what were my most visited posts of the past year, the amount of visits have inflated beyond anything I have previously experienced, which means that either a) my blog has suddenly gotten very popular or b) they’re all bots.

Even the most basic post about my ongoing experiences in grad school receive over two hundred notices a week and I am here to tell you, they really don’t.

However, I have posted some essays this year which I feel might warrant a second (or first) look, and here is a list of those.

A set of aging Gen Xers risk the Omicron variant for a romantic weekend in NYC during which everything went perfectly well except for the original reason for which they had planned the trip.

While writing a new script, I delve into the darker elements of my childhood and how I evolved into the witty but restrained raconteur I am today.

Picture says a thousand words, this one just says “loser” over and over again.

He’s the only one who really knew me at all.

Notes on this particular form of performance and the best cheeseburger I ever ate. 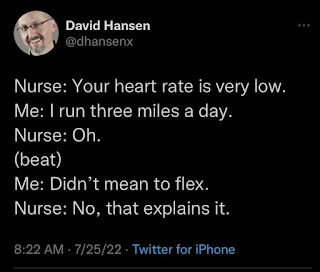 6. The History of Western Civilization (play)

No, seriously. It’s all the guns. This year marked the thirtieth anniversary of Guerrilla Theater Company, and one of our members wrote a really great piece about the American gun epidemic.

In the aftermath of the Dobbs decision which overturned Roe v. Wade, a recollection of one heady summer of street protest.

8. On Sight (Pre-Operative, Post-Operative, Recovery)
The vision in one eye was compromised by a detached retina. The operation and recovery took place while my family was out of town.

Much of the fall centered around the premiere of the film adaptation of this solo performance on stillbirth. I provided this deep dive into the musical inspiration for the original stage production, which was also included in the film.

Pretty self-explanatory. It is a decision which daily proves to have been the right one.
Posted by pengo at 12:00 AM