The History of Western Civilization (play) 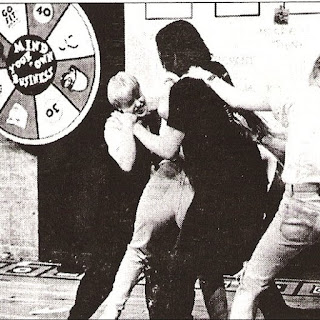 Following a number of mass shootings in 1993, my colleague Rich "Torque" Weiss wrote a piece titled "The History of Western Civilization" for our weekly social satire program Mind Your Own Business. It was a big hit and one we kept in the show for some time.

Torque was always more successful than I was at writing short plays that did not include spoken dialogue at all. I found it very hard to make my point without including one or two lines of dialogue at the end.
In this piece, a Guerrilla (usually him) would keep time on a marching bass drum as the rest of the team evolved from apes to humans to inventing the gun.

Having invented the gun, we all struggled to hold and keep it until eventually everyone had been shot dead, including the drummer. The last person holding the gun looked around, saw what they had done, put the weapon in their own mouth and then the scene would end before the final blast. 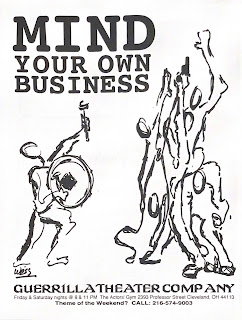 What started as amusing ended as a horror. Perfect, short piece.

We do not have video of this performance, the photo (above) depicts the struggle. Notice how one actor has his hands on the other's shoulders, and not around their actual neck. The piece was carefully choreographed.

The second image (right) is program cover art by Torque which we used for most of early 1994.

Did you know that when assault rifles were banned in 1994, mass shootings dropped by 43%? The 1994 Assault Weapons Ban expired in 2004, and mass shootings have since increased by 243%.

There are many causes of gun violence. But they all include guns.
Posted by pengo at 12:00 AM