More than the Met, the MoMA (yes, I will call it The MoMA) felt foolishly overcrowded. They check for vaccination, and they have timed entrances – but they don’t check the timed entrances. People just kept flowing into the MoMA on New Year’s Day. We headed straight up to the fifth floor, assuming the first would be most packed, thinning out as the floors went up. This was not the case.

The fifth floor holds the oldest collection, all those pieces that were most modern when the museum opened in the late 1920s, those works you probably saw featured on the cover of your high school fiction textbook. Manet, Monet, Matisse, Modigliani, Mondrian, and lots and lots of Picasso.

One of my favorite pieces (this time around, anyway) was a video installation titled MINUCODE by Marta Minujín (1968). A social experiment, she filmed different social groups over several evenings in the same cocktail party setting. Edited segments are projected onto four walls, larger than life.

As my wife observed, it is one thing to see still images of people from the past, styled and dressed for a casual evening out. It is another to see them in motion, as real, animated citizens.

I was alarmed by their extremely close proximity, breathing freely onto each other, onto each other’s drinks. One man takes off his glasses and vigorously rubs his eyes. One woman pinches something from her nostrils. And all the shaking of hands.

We had supper in the museum restaurant, and I made up for the previous night’s veganrepast by having a dish of raw beef.
Then we headed to the theater!

Why, when it seems all other Broadway theaters have closed, once, twice, a few times, due to Covid, did I hear nothing about The Lehman Trilogy? One possible answer, as my spouse pointed out, was that there are only three actors. I did not know this. Because I knew very little. Having decided to see the show I also decided to learn nothing about it, to be entirely surprised. Sometimes I do that.

I knew it was about the history of Lehman Brothers, one of the major financial centers that went bust during the Housing Market Collapse of 2008. And I knew it featured Simon Russell Beale. As a younger man, Beale was a member of the RSC in Stratford. In 1990, when our school attended a week of workshops and master classes there, he was one of those actors who led the workshops. We also saw him play the King of Navarre in Love’s Labour’s Lost, and Konstantin in The Seagull.

I did not know The Lehman Trilogy was directed by Sam Mendes, and that the other two actors were Adam Godley, who has been a supporting actor in countless TV shows and films (he plays Walter White's successful college friend in Breaking Bad) and Adrian Lester, an outstanding classiclal performer, a legend in the UK and who by rights should be headlining Hollywood films. Checking my program to see if there were any understudies, and finding there weren’t, I settled in for something fantastic.

But oh! The difference in the air, in the theater, just since October, when the boy and I saw Hadestown. Yes, we all had to show proof of vaccination then, too, and wear our masks throughout. But the concessionaire at the Nederlander Theatre was closed. And when the wife lowered her mask and took a sip from her water bottle, it was just as an usher was coming through to make a general announcement to the crowd, taking a moment to to first admonish Toni that there is to be no food or drink consumed in the theater.

We were all told that if we were to lower our masks, at all, it must be outside. Her announcement garnered applause, and it was good to know the crowd approved.

But my goodness. Think about all those people you know who are always making a stink about folks eating or drinking in the theater. Well, here we are and you got what you fucking wanted.

Presented in three acts with two intermissions, The Lehman Trilogy absolutely sails by. The performances were transportative. The design elements, from the rotating glass-walled office set, the gentlemen’s long, black frock coats, the video projections, live musical accompaniment and recorded sound, were perfection. And Mendes, above all, masterfully directed the circus.

And yet. As my mentor Bill Condee said, we go to the theater today for the same reason that the ancient Greeks did: we go to see the gods.

To see the gods. Not to see the assholes.

While I enjoyed the performance from beginning to end, and especially the first two acts, I was disappointed by how the story resolves itself, which leads one to question the entire endeavor.

Before the pandemic, the last great economic upheaval was the financial crisis of 2008, caused in large part by and resulting in the demise of Lehman Brothers Holdings Inc., and corproations like it. This play is the story of that company, who the actual Lehman Brothers were, and how their company evolved from a single textile store in Montgomery, Alabama to a mammoth financial institution whose grotesque acquisition of capital led to a near-cratering of the world economy. 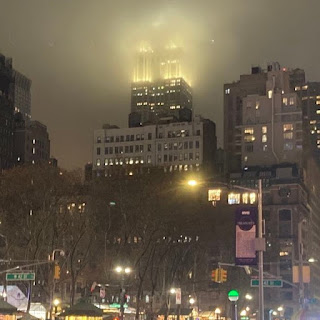 Perhaps we are to marvel at how such destruction can be generated from mild and modest beginnings. Henry, Mayer and Emmanuel Lehman were, after all, simply pursuing the American Dream. That they were active participants in the slave trade is depicted as something that happened to them, rather than something they in which they were complicit. The fact that Mayer Lehman himself held no fewer than seven people enslaved is not even mentioned in this play.

There may be some poignancy in viewing their saga, and that of their children and grandchildren (grandchild, really, Bobby Lehman, the last family member to sit on the board until his death in 1969) if the final third were not a confusing rush to explain what happened during the final forty years of management. Knowing what came before should illuminate how it ultimately concluded. I do not believe that it does.
The final image is that of three 19th century immigrant brothers preparing to recite the Kaddish for the collapse of a financial empire they had begun. Mourning the demise of something that was born in corruption does not seem appropriate.
It’s 2022. Must we continue to use the stage to consecrate the acts of venal men?
Posted by pengo at 12:00 AM