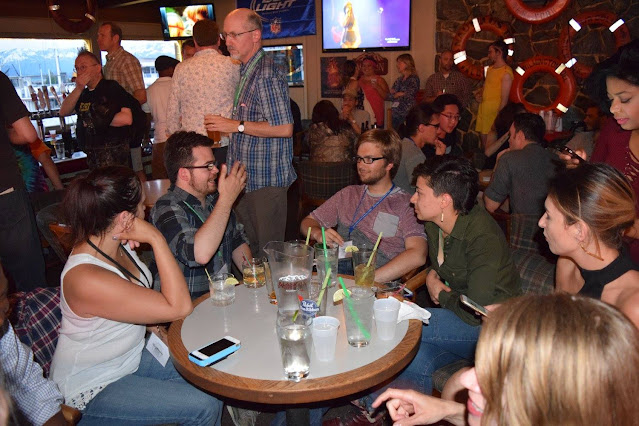 Has anyone ever taken a picture of you, a candid photo, and you realize it is at once the most accurate and the most horrifying picture of you ever taken? A photograph that both captures and destroys your soul? This is that photograph (above) at the Valdez (formerly Last Frontier) Theatre Conference in 2016.
We’re at the Wheelhouse. The place is packed following a performance. I have gotten a beer. And there is nowhere for me to sit. And I do not know who to talk to. Everyone else is engaged in conversation, they look relaxed and content, and there I am. Caught, framed in the near-center of the photo, deer in headlights, unsmiling, lost. I may as well be naked.

This is the most upsetting picture of me that has ever been taken, because I know how small I feel in that moment and I feel everyone else knows it, too. That’s me in the corner. That’s me in the spotlight.
I want to make it clear that I had a marvelous time in Valdez, received invaluable criticism and playwriting advice, and made friends and colleagues with whom I have kept and stayed in touch with for the nearly six years since.

But on that night I felt awkward, homesick, out of place, and if I hadn’t already bought that beer, I would have ghosted. I was shocked a week or so later to see this moment captured in such vivid detail among the dozens of happy images posted after the conference.

Last weekend, I attended a poetry reading at Superelectric in Gordon Square. I showed up twenty minutes before it was supposed to start, and yet I was the first person to arrive. I sat at the bar, I got a drink, and watched as folks walked in. I didn’t know any of them, except for two professors I recognized and I did eventually speak with them. But again, I felt like a complete outsider. Everyone there seemed to know someone, or at least not be anxious about meeting someone new, and mingling was happening. I had nowhere to go. I felt I had no “in” to any of these conversations.

The reading was good. I left as soon as it was over. One of my professors encouraged me to stay, telling me the party would continue at a bar across the street. I thanked them and begged off.
I do like being social. Except when I absolutely do not.
Posted by pengo at 12:00 AM