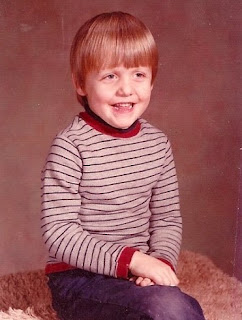 One of my notable character traits, which I assume is related to my being the youngest in a trio of brothers, is my sharp tongue.
The eldest sibling doesn’t need to prove their dominance, they simply are; always bigger, always stronger. The middle child is the mediator, to be sure, and also circumspect. Like Janus, they sees both ways, being younger and older, and yet not definitively either.

The youngest, this youngest, exerted his personhood the only way he could. With his mouth. If he got physical, his older brothers could always smother him with a pillow until he could no longer fight. This is a thing that happened. Why throw a punch, when depriving the offending child of oxygen is so much more effective and doesn’t leave a bruise.

So, I had a big mouth. Witty, but also vulgar. And when cornered, I lashed out. I graffitied, writing with soap on mirrors, pencil on desks, chalk on boards, carving into wet cement. When, in sixth grade, I was caught writing something particularly nasty about someone on a table in the library, a panel was convened to try and channel my impulses.

My guidance counselor asked if I was interested in creating a middle school newspaper.
"Sure!" I said.
Fine, he said. Create one.

Unfortunately, I am not an eldest child, I had no sense of independent initiative and required guidance, not knowing how to ask for it and none was provided. I continued to stew in silent resentment through my middle school years.

The high school did have a weekly newspaper and I was finally able to express myself through cartoons. I also wrote the occasional story or opinion piece which were inevitably disastrous, my penchant for unfortunate and often irrelevant metaphors distracting from whatever point I was trying to make.

Words can be an ugly tool. Worse, when you have an affinity for using them but only for the expression of resentment and spite. These were the early  plays I wrote to either drive a wedge between myself and people who cared about me, or to kick them in the ass on the way out the door. I need not elaborate. Some saw their way onto area stages, others did not, but they were read. It was ugly. And stupid. And embarrassing.

Practicing restraint is one thing, it requires constant vigilance. My wife deserves all the credit, not for teaching me restraint, but for sharing with me more a open engagement and understanding of the world and the people in it. It’s humbling, and this humility has helped me to finally, as so many before had recommended, think before I speak. And to edit, edit, always edit. And also to know when its best to delete.
Posted by pengo at 12:00 AM