Ten Minutes to Midnight: 9 Quirky Plays for the Holidays 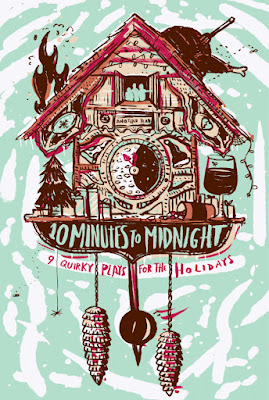 My first Christmas Pageant in elementary school (this would have been in 1973, surely they called it a "Christmas" pageant) was both a time of wonder and discovery. It was a wonder to be in our school after dark, a time when you should be at home and had never given a thought to what night time inside of a school might look like.

Also, one of our teachers had a “crystal ball” which was a gift from Santa. It glowed green and when you spoke into it, Santa could hear you! He didn’t speak back, that would have been asking too much. But just the idea of a one-way mystical communication device was enough to send the imagination on a whirl.

During the show we were gathered in one of the classrooms, waiting for our turn to take our place on the risers in the cafeteria. I was wandering the hall, probably headed to the bathroom or something, when I saw something in that teacher’s darkened room. It was the crystal ball. I went into the room, and took a closer look. It wasn’t glowing. It was plastic. It had an electrical cord coming from the back. It was just a light.

Was I disappointed to learn the truth? Maybe a little. I don’t remember ever having been a "believer" anyhow. But now I knew a secret, something that my classmates did not know. And I didn’t tell them about it, because it was mine.

Each holiday season I want to be involved. It’s not enough to indulge in the holidays (which I do, you know me). I want to participate. I want to provide the entertainment that provides joy during the holiday season, especially for those people who might only see one play a year, and it’s this one.

I have written before describing why I am goofy for the holidays. It’s about warmth and love, introspection and also gratitude. But though I have treasured, bittersweet memories of private, cloistered companionship (and even solitude) the sheer mania of the impending winter season makes me want to get out and be with the masses, to see the lights, to hear the music, to tell the stories.

See that last one? Yes! Theater cheer this holiday season at CPT! Playwrights from Cleveland and beyond have created nine short plays, and having attended the first reading last week I am very glad to be in such company. They’re engaging, touching, and very amusing scripts about the season of light.

And this is special. It is as though holiday entertainments must either be childlike and sentimental, or intentionally the opposite – outrageous, cynical, or obscene. The plays on this roster are intended for an adult audience, but they’re about family, anxiety, romance; my own pieces (yes, I have more than one, because they are short) are about tradition, death, legacy, and one kick-ass patisserie.

The production is shepherded by Caitlin Lewins, with whom I had a marvelous experience creating Savory Taṇhā for CPT during the lockdown, and Ananias Dixon who was videographer for I Hate This for Playhouse Square (coming soon, I promise).