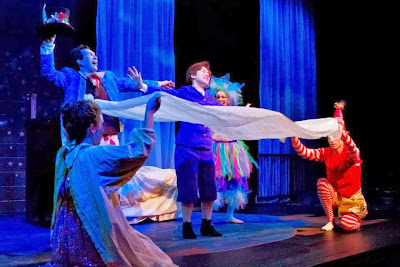 Adventures In Slumberland opened a week ago, on Saturday, November 30. The houses have been well-attended, the response from children (and adults) has been very positive. And we have gotten some great attention in local media.

Director Ali Garrigan and I had a lovely conversation with Dee Perry at IdeaStream this week. I get a bit tongue-tied by Ali keeps things pretty grounded as we discuss the psychology of Slumberland. Excuse me for saying so, but listening to this interview really makes me want to see this show.

Also, we never mention that fish. Also, too, we remember to mention Santa. You forget what kind of impression he makes, but children have been spotted leaning forward, wide-eyed when the man with the bag makes his brief appearance.
CoolCleveland
"If you have kids, you need to check this out." - Sarah Valek
Review

In her warm and enthusiastic review, Ms. Valek does point out that this Talespinner show (and she has seen all of them) "doesn’t have as strong as a storyline as past performances." I can't disagree with this, and excuse me for saying I meant to do that but that was one of my plans for Slumberland, that it resembles the episodic nature of a comic strip while also, eventually, getting somewhere.

Rave and Pan
"It's quite a treat." - Christine Howey
Review
Christine Howey mentions that Imp "speaks in a non-identifiable foreign tongue," and that was thrilling to me, because (and I believe Ms. Howey actually got this) Imp was a character I was most concerned about. McCay's original version is a grotesque racial stereotype, but while most adaptors have chosen to just leave him out, I thought he filled a necessary role as third. Third Marx Brother, third Stooge, or my case, third child. 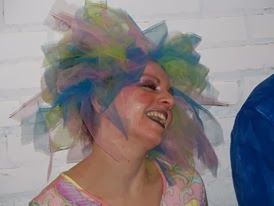 Lauren B. Smith as Imp

Imp exists to embody the strange, unfamiliar nature of Slumberland, but that also means to know things that the outsider (Nemo) cannot know, and to comment on things without being understood. The children understand Imp, without actually understanding the words. Lauren is so marvelous with the character, and communicating Imp's language, it is flattering that Howey refers to it as a "foreign tongue" when all it is is entire sentences in English written backwards.
Posted by pengo at 8:38 AM

Email ThisBlogThis!Share to TwitterShare to FacebookShare to Pinterest
Labels: Adventures in Slumberland, CoolCleveland, media, Rave and Pan, The Sound of Applause, Winsor McCay