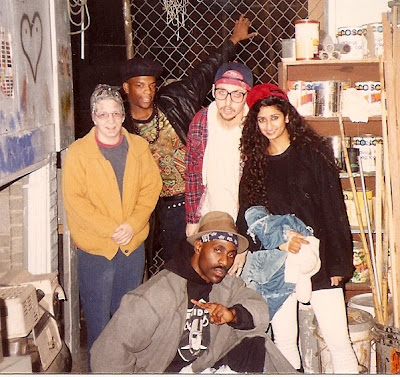 Jen, Larry, me, Shruti Amin and (below) Victor.

Part of our responsibilities as members of the Karamu education department, in addition to the daily outreach tour to schools around northeast Ohio, was to perform in the annual holiday play for young audiences.

In 1991 that was a new play by John Cameron, Stealing Christmas, directed by education department director Justin Dennis.

The tale is straightforward. Four kids, Chris, Lila, Tony and Donny, craft a plan to make some money on a cold, winter's night. Chris (Victor Dickerson) is the ring-leader, deciding it would be clever to  knock on the door of some old person, sing carols or something, and when they get invited in, he would distract them while the others go through the place and rob them blind.

The first house they try, they meet Edna (Jennifer Silver) who lives on her own, and is all too happy to have company. Soon Chris is seated, eating cookies while Lila (Shruti Amin), Donny (my college roommate Larry Trice) and Tony (myself) have disappeared into the rest of the house.

Edna's childhood stories were played out onstage by three of us, with me returning as her father, Larry her brother and Shruti as a young Edna, showing how she and her family always got by without much, except love and happiness and positive feelings.

In the end Chris learns the true meaning of Christmas, and his friends return to tell what they have learned: the old woman has nothing, her house is practically empty.

I was reminded of this tale when my family and I journeyed downtown this afternoon to see the new holiday play A Carol for Cleveland at Cleveland Play House.

Written by Eric Coble and based on a novella by mystery writer Les Roberts, this play tells the story of an out-of-work steelworker in the late 1970s. Originally from the Pittsburgh area, Ed Podolak (Charles Kartali) has been living hand-to-mouth in the armpit of the nation for a year, trying to find steady employment.

As in Stealing Christmas -- indeed, as in the original Dickens' classic, A Christmas Carol -- the past is used as a device not only to educate the audience about the history of an individual, and how they came to be who they are, but to provide a reminder of what they were always meant to be. Or could be. Or after all, should be.

However, as my wife pointed out, it is Dickens who dared take that extra step, and to wade into class politics.

It is important for us, all of us, to be grateful for what we have, to share with those closest to us, and with those we do not even know, and above all to remain positive. To have hope.

But Dickens also suggests that those who live in plenty have a moral responsibility to contribute to the general welfare, and to engage with and to care for mankind.

Or to burn for all eternity in the pits of Hell. 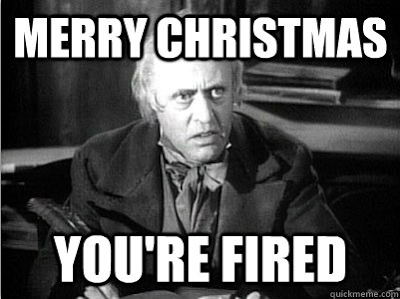