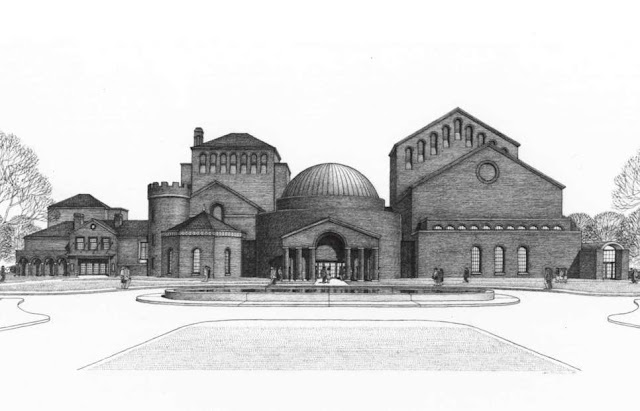 With the recent announcement that the Cleveland Clinic itends to bulldoze the former Cleveland Play House Theaters designed by Philip Johnson (Cleveland Arts Prize for Architecture, 1972) many of my theater friends are condemning and lamenting the move. While I am sympathetic to anyone who mourns the loss of any site which is a repository to good memories, claims that the building is "historic" don't hold water with me.
The Play House worked in many different venues prior to consolidating into the former Sears Building at 8500 Euclid, and I was never so joyful as when it was announced they found a new home in Playhouse Square, where they are today.

The building created by Johnson in 1983 was a lazy cash grab in which he recycled old ideas and designed yet another proscenium stage for the company, a hall with terrible acoustics, awful sight lines, and useless "boxes". Plain Dealer theater critic Marianne Evett called the design of this new, 644-seat Kenyon C. Bolton Theatre, “appallingly short-sighted … aimed at public grandeur rather than furthering the art of theater.”

Following the unrest of the 1970s, many suburban whites declared they would never again visit downtown, and there were also those (like my parents) who would drive to this oasis of white privilege, in the center of a largely African American neighborhood, to park, scurry into the place, get their theater and jet directly back home.

Don’t get me wrong, I am a fan and supporter of the Cleveland Play House. I also have many incredible memories of the facility, like witnessing the Doris Baizley adaptation of A Christmas Carol starring Wayne Turney in the Drury, staging the first public reading of Sarah Morton’s Eighth Wonder of the World on the stage of the Brooks, and when Sherrod Brown read a scene from I Hate This on the stage of the Bolton.

Dobama Theatre produced several shows in the blackbox space (for which Johnson deserves credit, at least) including the world premiere of Morton’s Night Bloomers. One day I will spill the tea about that production, it was quite an adventure.

But by their own estimation, the Play House paid a million dollars a year just to keep the lights on in that vast, cavernous institution. The building is not beautiful, it’s not practical, it is not historic.

And it was designed by Philip Johnson. Eleven years ago as I was studying Cleveland in the 1930s I learned a lot about Johnson which made me like him even less. I will not miss this theater space.