We have spent the week vacationing with my in-laws. There are several ways to reach Athens, Ohio from Cleveland, none of them anything like a straight line. Though it is quicker to take I-71 through Columbus no one hates themselves that much, so we usually take 77 to Marietta and the one of a number of ways to get to 50 West.

A newly completed bridge, part of state road 50, spans the Ohio River, and lately we have taken that route. Connecting Parkersburg and Marietta (yes, you actually go through West Virginia for a few miles) it vaults over the western tip of Blennerhassett Island, site of an historic meeting which would doom the island’s Irish namesake and also the political aspirations of that most mercurial of American icons, Aaron Burr.

Blennerhassett Mansion, where the one-time Vice President and murderer of Alexander Hamilton met Harman Blennerhassett and his wife Margaret to make plans for an expedition down the Mississippi to New Orleans, was located at the opposite end of the island. An historic recreation of the mansion is there to visit today. Twenty-five years ago I performed in a musical inspired by these events, Eden of the River, which was presented on that site.

Driving or flying, as it were, over that island, as we do most times we visit my in-laws, I am reminded not only of all the time I spent on it, but how little of it I explored. It’s not a very large piece of land, yet the only time I stepped away from the boat landing or the area immediately surrounding the mansion was that afternoon I and another chorus member escaped to the woods to make out.

We didn’t go far and we did not stay long. You can interpret that as you will. 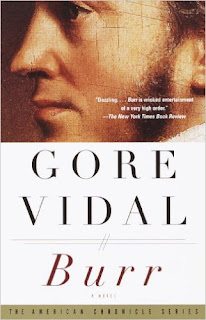 What was it like in December 1806, two hundred and ten years years ago, when Burr returned to Belle Prairie (today pronounced BELL-pree) to raise men, funds and supplies -- yet no weapons -- for his ill-fated expedition party? There was no bridge to the island, there still isn’t, this one goes over it, as I said, not to it. How dense the forest, how passable the terrain? Were there any native peoples in the vicinity, how isolated were the Blennerhassett from Western civilization?

The characters of Harman and Elizabeth do play an important role in Gore Vidal’s Burr (1973) an historical novel told from the point of view of the young Charles Schuyler (a fictional character and no relation to the Schuylers in the musical Hamilton) and the book is one part of a collection of American histories the author wrote and named Narratives of Empire.

Never read Vidal before, have to admit, I know him as a talking head in The Celluloid Closet, commenting on his own work as one of numerous writers for the screenplay for Ben-Hur (1959) starring Charleton Heston. Vidal's personality as an arch literary satirist of the twentieth century has largely come to me via osmosis. My father's shelves, which we are currently culling, include several of his works. I am under the impression that any man of my father’s generation with a standard liberal arts education would be wanting without them, though my father was better read than most. Certainly better than I.

The book has taken months for me to read, not because it is not compelling -- it is -- and a satisfying read. My days have been so long, my responsibilities continuous and varied, and though I would pick it up most nights I would only make it through three or so pages before being overwhelmed. I even tried reading a few pages that long, dark night of November 8, when my thirteen year-old daughter was so crestfallen over the election that she could not rest and we compelled her to sleep with us.

True, this novel's content pertains to history, American history, but removed as it was from current events it provided a mild distraction.

In fact, it is because of current events that the novel itself comes as something of a comfort. Vidal is a member of a bygone era, Vulture called him a “dapper, left-wing bomb thrower” -- not a literal bomb-thrower, but that kind of old-school gadfly who could verbally cut you to the quick and leave you incoherently enraged. But first you have to a) be listening and b) understand that you have been insulted. Today’s right-wing demagogues owe their present success by simply refusing to do either.

Burr, the novel, provides the author the advantage of furnishing savage commentary upon icons of American history from a vantage point twice removed, from either his main subject, once Senator, then Vice President, but always “Colonel” Aaron Burr, or from his narrator, Mister Schuyler, a young man who in the course of just a few years rises from a desperate, penniless, inexperienced newspaper writer to a comfortable position in the the Van Buren administration.

Schuyler’s commission is to write a memoir of the ageing Burr (now eighty, some got half as many) and over their time together not only develops great admiration for the Colonel, but also absorbs his worldview, restrained temperament and even to some degree his remarkably subtle wit.

It is this wit, however, in recounting Burr’s version of the American Revolution and all that came after, that provides the subject, and in fact the author, to portray George Washington as a colossal failure on the battlefield, exhibiting terrible judgement (and apparent fantastically large buttocks) winning only one battle -- Yorktown -- and not without foreign assistance.

Later it is Jefferson, not Burr, who appears to hold no moral center, shifting any position necessary to keep the nation a loose confederation of states, denying strong federal power and yet as President freely violating or proposing to violate any of new bill of rights to maintain the status quo (i.e.: slavery) or to destroy his perceived enemies (i.e.: Aaron Burr.)

The legendarily soft-spoken Jefferson, always clearly articulating his position, is rendered a slippery cipher, always scheming, fiddling with his inventions, and in constant opposition to Burr, who, by his own description of events, made the appropriate decisions necessary for Jefferson to become President. For the sake of the nation.

Of course, this is Burr speaking. And he speaks to an impressionable man who develops such admiration for him, delighted by his “exquisite irony” and “serene good humor.” It takes a moment to realize that the true object of such compliments is Vidal himself.

And this is comforting how? Donald Trump has made a mockery of American history with his arrogant run for President. Assuming he would never win, he was also more successful as a sloppy, right-wing bomb thrower, capitalizing on resentment, anger and outright racism to propel himself to be the loudest and most visible opponent to Barack Obama. His goal was self-aggrandizement, but unfortunately for him and the rest of us, he now needs to lead, something he has never been successful at doing.

It is demoralizing to imagine we are ending an era in which a young Puerto Rican-American with a Broadway musical under his belt could be granted an audience with the President of the United States to rap a song about the largely unregarded first Secretary of the Treasury which caused a YouTube sensation which inspired him and a company of talented artists to create a new musical which sparked a national conversation on what it means to be American, to be America.

Donald J. Trump does not inspire confidence, he can’t make anything great, and the only artwork he has ever inspired in my neighborhood was a great, hideous nude statue someone dumped on Coventry last summer.

Vidal wrote Burr in the era of Nixon, his novel reeking of cynicism, every player a player, twisting words and circumstance to his own advantage. His America of the early 19th century is a murky backwater where the rich stuff their faces and drink and smoke and spit and talk and talk and talk.

He chooses a protagonist in Aaron Burr, worshipped by the common people, heralded wherever he goes, once he has been exiled by proper society for the murder of Alexander Hamilton.* In tearing down icons and exalting this scoundrel, Vidal makes you reconsider all you believe you know about the Founding Fathers. Good Lord, the man even suggests Davy Crockett was raped first before being killed at the Alamo.

So, the United States of America has elected to be its Chief Executive a scoundrel, a self-serving villain who will do what he can to subvert the Constitution to maintain the status quo and destroy his enemies, again. We got this far, citizens. The Republic will prevail.

Exactly how we will overcome, that is a terrible mystery and one which we carry into the new year. It has been suggested that Vidal’s type of scorched earth criticism of those with whom he disagrees has brought us to our current level of discourse. For when your facts are correct, but you are arrogant about it, why would your opponent even respond with an intellectually supported response? Why not just say,”Fuck you, you’re wrong.” and listen to the multitudes cheer? It certainly worked in 2016.

*About that; Lin-Manuel Miranda’s Hamilton taunts Burr to mention a “specific grievance” from over “thirty years of disagreements” for which he should apologize, there was one specific, heinous, personal insinuation made by Hamilton in mixed company and behind Burr's back, an insinuation which had absolutely nothing to do with Burr’s political or professional machinations, which might lead one, were they so inclined, to challenge one to a duel.

This post has been updated to include a photo from 2018.