Eugen Berthold Friedrich Brecht (February 10, 1898 – August 14, 1956) was the greatest playwright of the 20th Century. Wait, let me rephrase that. Berthold Brecht was the playwright of the 20th Century. That's more accurate. The darkest, bloodiest period of human history. A century so packed with misery, betrayal and horror, we ended it a year early. And Brecht knew it, and wrote plays about it.

Yes, for those of you paying attention, the inaugural production of Cleveland Play House in the newly redesigned Allen Theatre was written by Berthold Brecht, though they have worked very hard to make sure no one knows that (see marquee, right.) 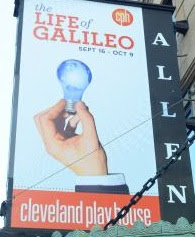 Originally written in the late 1930s, and revised during Brecht's time in California during the late 1940s, this Cleveland Play House production of Life of Galileo is painfully relevant. It could have been written today. Seriously. That does not mean the rap sequence was necessary, I really wish they hadn't done that.

(Capsule review: Paul Whitworth is delightful and heartbreaking in the lead role, and he is well-supported by the professional company, and a highly satisfying design team. Go see it. For real.)

Galileo discovers the moons of Jupiter. The fact that an interstellar body can have its own satellites thrown into question an Earth-centered universe. When he invites the powers-to-be to gaze into his telescope, as evidence, as proof, to define fact, they ask "Why?"

In the United States, Brechtian is a word which can mean all kinds of things; cold, stagey, artificial. Apparently, though Brecht loved the theater, he thought audiences should have a miserable, awful time at the theater. This is of course nonsense. His texts belie this fact. He stood in opposition to "realistic" theater, where we are supposed to forget we are watching a play. But stagecraft is a central concern of his work, and the best productions of his plays are those which are active, passionate, aggressive, hilarious -- alive.

My wife and I saw Caucasian Chalk Circle at the National Theatre:


"… produced with a great sense of play, humor, and adventure. In the round. A large company playing lots of roles … some of them were only there to be musicians, but they also joined in for crowd scenes and to help create “the set” … using long, study poles, they made spears and guns, but also a rickety bridge and even made a river using them.

"The creative use of props and movements. You can be anywhere."
- personal journal, June 15, 1997

Brecht was called before the House Committee on Un-American Activities, and did appear on October 30, 1947 where he denied membership in the Communist Party. The very next day, he left the United States forever, eventually settling in East Berlin. As Brecht illustrates in Galileo, fear is a much more powerful motivating factor than honor, nobility or compassion.

Then again, in Caucasian Chalk Circle he suggests the opposite.

Cleveland Play House presents "Life of Galileo" by Berthold Brecht at the Allen Theatre in Playhouse Square, September 16 through October 9, 2011.