The History of Underground Comix 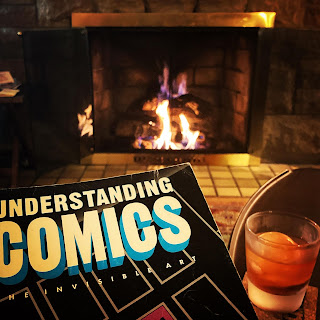 When Ohio University announced its first graduate level course in sequential art, The History of Underground Comix, I was still an undergrad. It was 1988, Fall quarter of my junior year. But if there was going to be a course on independent comics, by God, I was going to be taking it.

I was, at that stage in my life, immersed in comics. I had been reading commercial comics or “floppies” since I was a kid, and the 1980s were a golden time for the superhero genre; reconsidering it, turning it inside out, and creating the template for today’s Industrial Superhero Film Industry. Books like Watchmen, The Dark Knight Returns, and the heyday of the "Uncanny X-Men."

Also, I had been drawing a daily strip for the college paper and though my art was pretty crude, I was not only taking inspiration from mainstream comics. I had begun to discover alternative works, including those of Harvey Pekar (American Splendor), Matt Groening (Life In Hell), Art Spiegelman (Maus) and those artists that appeared in Spiegelman and Françoise Mouly’s Raw anthologies.

So, if there was going to be a course on comics, then I, David Hansen, creator of the controversial strip Breaking Point, would have to be accepted.
This was a mistake. Fall quarter my junior year was a disaster for me for a number of confluent reasons. I was cast in an extremely challenging mainstage show which conflicted with much of my attendance for this evening class. I underwent something of an emotional breakdown as I negotiated my poorly-managed interpersonal relationships.
And the fact is I had always been a bad student. I skated through my classes. I knew enough to pass, even occasionally to do well. But I was never a deep study, or a good reader, of texts. Pleasure reading, sure. Not work that was assigned.

The professor was skeptical. An undergrad can’t just take a graduate level course. I had to submit a portfolio, and a letter of intent. Only then was I grudgingly assigned a slot.
But there were texts to be read and papers to write, and debate in class and a final project which involved the class collaborating on creating an original, physical comic book.

The comic, titled simply “401” after the class's room number in Siegfried Hall, was a missed opportunity for me, one in which I could have pushed myself and broken form. As it was, I drew two pieces involving suicide (I didn’t know at this time how thoughtlessly trite that was) and a third which was just a cheap shot at one of my classmates, a woman with a strong feminist agenda.

This one is a single panel depicting myself reading Kate’s final monologue from The Taming of the Shrew as my “humorless” classmate approached from behind wielding a baseball bat. No, I will not be sharing that image here. 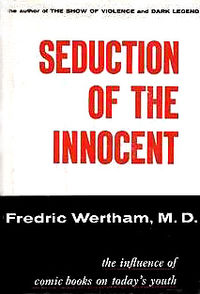 Another signifiantpart of our grade was a class presentation, for which I planned a take-down of Dr. Friedrich Wertham’s seminal work, Seduction of the Innocent, which documents a direct connection from comics to juvenile delinquency.
I cannot imagine I actually read the book. Worse yet, I had a performance the night of my presentation. I provided a booklet of photocopied images from the book, images from horror and superhero comics of the kind Dr. Wertham asserted were the cause of sociopathic behavior, and also a cassette recording of a stream-of-consciousness rant in which I quoted Wertham's claims and then just said that he was wrong.

The next class, the final class, I avoided anyone’s gaze and received my materials back from the professor. The cassette itself has been recorded over by members of the class to provide their response. I think I got a couple minutes into it. I never listened to the entire thing The tape began with a lecture from one of the women (a woman of color, if I recall correctly) describing how unprofessional my work was and spelling out in no uncertain terms the errors in my scholarship. 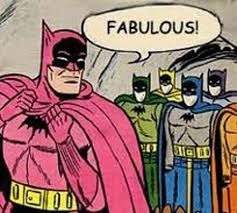 I dropped the cassette into the wastebasket, not out of resentment but shame. I had fucked up, and I knew it.

There’s always that guy in any class, you know the one. Often absent, does substandard work. You don't know who they are or what may be going on with them, but you do wonder, why is this person even here? For that class, that guy was me. I got a D for the course, which I believe was generous.
Why am I sharing this humiliating piece of personal history? Because this semester I am taking a graduate level course in Comics Studies and Queer Theory. Among other goals, I plan to make up for past failures.
Posted by pengo at 12:00 AM