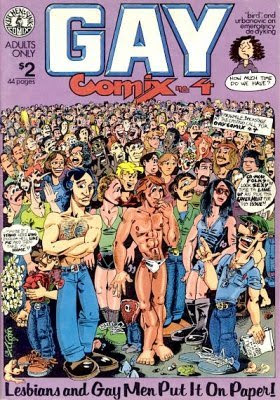 When I was a teenager, there was a period of time when I hung out at a comic book store. North Starr Comics was located in the storefront of a motel on Lorain Avenue in Fairview Park. There was a cast of regulars, at the age of fifteen I was one of the youngest. We would read comics, watch video of B-movies on the TV, talk shit, pull each others’ chains.

One Saturday in early 1984 the owner had scheduled a live auction, to get inventory he couldn’t move out of the place. It wasn’t a very large store. Most of what he was unloading were by lot, and I wasn’t a huge spender. But there was a lot of cajolery, mocking each other for their stupid purchases.

When he announced, “Next up, one copy of GAY COMIX!” that got a huge laugh, and I hollered, “Two cents!” It was a joke! Because, come on, who would want something called “Gay Comics”? Right?

“I hear two cents!” said the owner, and I realized I had made a mistake. Because now I was the joke. No one else bid on it, and in spite of my desperate protestations, I won the comic. I refused to pay for it. I was informed it was free, and if it was discovered I had somehow left it behind there would be hell to pay.

So, I slipped it into my bag and hoped no one would mention it ever again. Later, I read it.

Gay Comix (later retitiled “Gay Comics”) was first published in 1980 by Kitchen Sink Press. It was created to be an anthology of short stories by gay artists on gay themes. Originally it leaned heavily on providing true stories of the LGBTQ+ experience. It had a mission to challenge the prevalent cartoonish imagery of gays and lesbians in the media, and in comics. 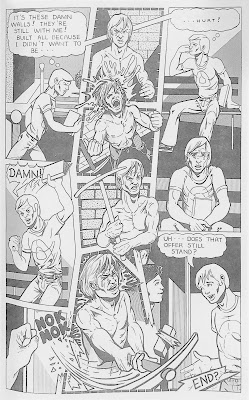 While it did feature nudity, there was an intentional de-emphasis on the depiction of sex or anything that might be construed as pornography.

Gay Comix #4, the issue that I had won, was published in late 1983. It was not only my first adventure into comics with LGBTQ themes, it was perhaps the first underground comic I had ever owned.

What does that mean? That it was my first experience with non-superhero, non-fantasy, real-life material, set down in black and white, in this case created by a wide variety of artists and writers, including a few artists of color. The subject matter is almost entirely binary, however, and leaned more into stories about gay men than lesbians.

One of the stories, Ready or Not, Here It Comes by editor Howard Cruse, was a view of the AIDS crisis, certainly my first exposure to the pandemic from a gay man’s point of view. Another, The Unicorn Tapestry by Roberta Gregory was the only piece in the issue about someone who is transgender.

I was raised to be homophobic. But I found this material to be fascinating. I was not repelled. There were coming out stories, tales of first love, some purely comic bits. Naturally, I was concerned that if anyone knew I was reading this they would “think I was gay.” I kept it to myself. Reading this book did not end my bigotry. It was the first crack in the wall.

And I still have that comic book.

Source: Wikipedia
Posted by pengo at 12:00 AM