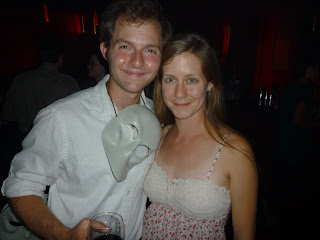 My companions at Sleep No More, James and Emily, reported strange, performance-induced dreams the following night. I had no such dreams that night. In fact, it took two days to decompress following that event and to truly sort things out.

I do not normally reflect immediately upon emotionally-effecting events. I can say good-bye to someone I know I will never see again, and be sincere and even wistful, but never cry, not then. That comes later when I am suddenly surprised by a reminder of their being and the full weight of loss and sorrow crash upon me like a fool.

We saw the show on Friday. Our final performance in New York was last Saturday. We packed up and departed on Sunday. James slept for a couple hours in the early afternoon and I drove in silence, and that was when I had the chance to think. I thought about everything, the previous ten days -- the whole summer, really -- and all of it rolled together into one big thing.

This was a theater festival for the record books, if because this time I was not alone. Very little downtime, if I did not choose to act, then someone was choosing an action for me. I did not go from point A to point B without stopping at points C, D & F to meet one or another friend, colleague or family member. So many places, people and things.

And then there was the witch, or nurse, whatever she was. The one who chose me. Because that's part of the attraction, you know? That's what the people hope for, it's not about the one-on-one performance experience. You could get that in one of the open rooms just because no one else happens to be there at the time. When one of them chooses you ... well. That means there's something special about you, right? Even if you are wise enough to know that there isn't. You can't help it.

It was entirely by chance, because I knew these things happened, but it still took me entirely by surprise. It happened like this:

There is this corner room, with a platform elevation, all the walls floor to ceiling painted in black, I passed through it quickly once, but heading through again saw a nurse, a brunette, writing something on the wall. I went and stood next to her. She was writing  the same thing over and over again.

That's when I assumed she must be a weird sister. (Patrick Stewart's recent TV version of Macbeth featured witches in the guise of nurses, too.) The music changed, she stiffened, and walked out of the room. I followed, as did many others, through the branch-maze, but then we encountered another witch, the red-haired one.

They stared at each other, but then she looked at me. Unconsciously, I had put my left hand over my heart. Was that what she noticed, that I was lost in it? That was when she offered her hand.

As I said, I won't describe what happened when she took me by the hand and led me into her little room ... except for this, because this was most troubling.

Near the end of our time together, in that little room, she again took my by the hand, and held me hard. Then she leaned back in her chair, holding me to the length of her entire arm, trembling and shaking me. She sighed piteously, and just I thought she was going to pull me off my seat, she yanked me close and whispered in my ear.

That done, she let me go, and showed me out the door, and as I took the last step turned to see her slowly close the door behind her, and to the last the light of her eyes were bent on me.

This final image has been blazed into my thoughts, as though it were a lost memory of something I had once experienced, some haunted, familiar recollection. It took an entire week before I finally realized where this had happened before.


Oph.
He tooke me by the wrist, and held me hard,
Then goes he to the length of all his arme,
And with his other hand thus ore his brow,
He falls to such perusall of my face
As a would draw it, long stayd he so,
At last, a little shaking of mine arme,
And thrice his head thus wauing vp and downe,
He raisd a sigh so pittious and profound
As it did seeme to shatter all his bulke,
And end his beeing; that done, he lets me goe,
And with his head ouer his shoulder turn'd
Hee seem'd to find his way without his eyes,
For out adoores he went without theyr helps,
And to the last bended their light on me. 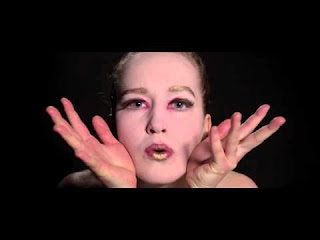