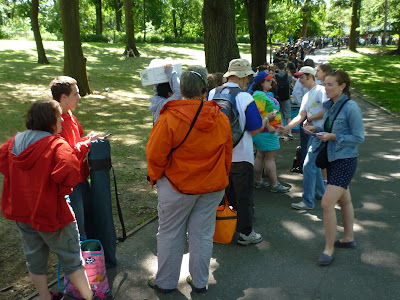 This is a long line of people.

Handing out cards to the folks waiting to see LLL in Central Park this morning, shortly before free tickets were distributed. It requires perfect timing, just before the tickets are handed out, people are alert and cherry and excited, no one is asleep anymore, arguments have been concluded, crossword puzzles are put away.

Lots of people were actually very chatty and wanted to know about this prequel to Much Ado we were advertising. They engage us in conversation. People are friendly, really, unless they just want to be let alone.

We were also taking pictures around Central Park and other locations, thank you photos for folks who had supported our Kickstarter campaign. We even took pictures in the New York subway, which is not, infact, a legal thing to do. 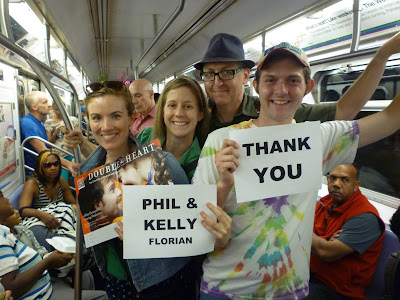 There were and are a lot of friends and family around today, I had very close friends join me at the theater tonight, it seems Diana's entire extended family is here, even Emily's beau Benjamin made a special trip to NYC for the production. We escorted her to Washington Square where we found the ladies from the FringeNYC production KINEMATIK promoting and presenting their work by the fountain. 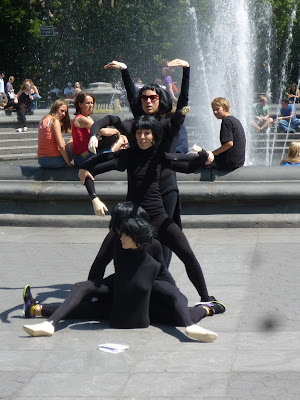 We received a very nice notice in Curtain Up:

"Universally well acted by the four person cast, and director Lisa Ortenzi strikes just the right tone ... an excellent production, and one of the better overall shows I've seen at the Fringe in a while." 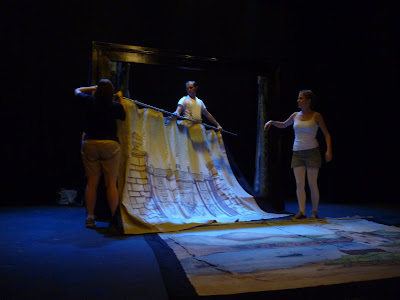 You will notice stage manager Diana assisting in getting up the curtain this evening. That is because David failed to refresh our supply of programs in the wig box. We had pre-sale of 20,
and about that many in the box. Lisa tried to convince me not to worry about it, but I ran the three blocks to the apartment and back in about ten minutes. A half-mile, without feeling pain or getting winded. Because I am a runner. But it also meant that I started the show sweating.

We did have a house of 35. It was worth the effort to get the programs. One more show, Saturday at noon, and we are out. One and done. Tell your friends, you'll never get to see this ever again.
Posted by pengo at 11:55 PM