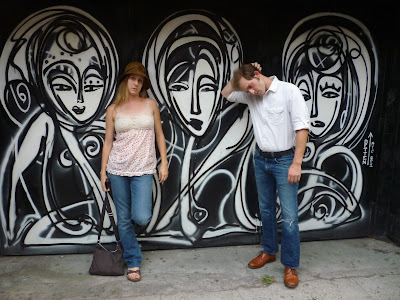 Another bright, beautiful day in New York City. For reals, we got rain dumped upon us on the drive into Manhattan last Thursday. Tuesday morning was cold and rainy and I did my laundry ... and then the skies were bright and clear and stayed that way.

Also, it has been warm, but not hot. I mean, the weather has been ideal. This morning James and I headed out to pass out palm cards at the Delacorte Theatre in Central Park. It's Friday, so I assumed the line for this evening's performance of Love's Labour's Lost would be long, but I had no idea. I mean, there were at least a hundred people in line who couldn't possibly have gotten tickets.

But still, morning in the park. Good times.

James and I passed out at least four hundred cards. No kidding. We ordered five thousand cards for this trip, they came in 20 boxes of 250. We have one more show, and we are down to two boxes, that is some good distribution work for six people. James and I emptied the better part of two just on the trip this morning.

I am always delighted when people ask questions about the show, that's a good sign, where, exactly, and when and what, who wrote it? James says it's in verse and someone asks, what kind of verse and I poke him and say, "Do Messina." He fills the air with:


Messina! Fair Sicilian burgh, at last!
From northern climes I’ve soldiered, twice enlisted
To defend this federated kingdom, Italy.
But leaving Padua I’ve never yet encountered sun so bright,
Air so fresh and salty from the sea,
The sight and scent of citrus, hanging low.
If I must rest and recreate abroad,
Why then, Messina is the place for me!

There was applause and smiles all around, because that's what you get for having a good voice in Central Park. 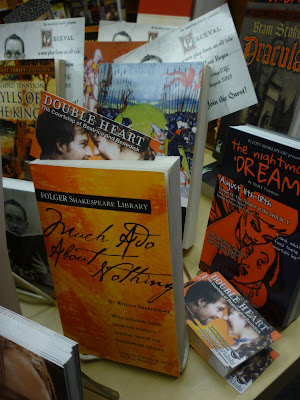 How do you get people to come to your FringeNYC show, when you are not a New York company, have no local following? We have spent cash on advertising, well-placed advertising, but not an absurd amount of advertising. Mostly online, at various sites.

We hired a p.r. firm to bundle our materials with the rest of the FringeNYC press releases, which may or may not stand out, with so many others vying for attention. But Robert Muller's production photographs are solid, attractive, just what a blog or paper or magazine wants to see. Colorful, with costumes, a set, from a performance, not posed, lively. Interesting.

For these efforts we had advance notice in The New York Times, and Backstage.com. This is exactly what you want, what you need, to get noticed before the festival begins. And we met people on line at the Delacorte who said they'd seen it! In The Times!

And there are reviews, and those have been good. I get the impression that some people do not find my performances to their liking. They love our lovers, however -- and praise my writing, which is more important to me, anyway.

... and our attendance has ranged from 25 to 40. So, okay. Better than some. I was hoping for more. Asked prior to the Fringe, I said I wanted 50. Fifty per show. But what do I know from attendance, I have done solo shows at FringeNYC twice before, and each time I didn't come near what we have seen this year.

... and we're not done yet! One more show tomorrow. A Saturday at noon, not exactly when I'm out seeing theater, but pre-sale is as good or better than previous performances, so we have have a good showing. Or, you know. The same. Lots of friends are coming ... the question is whether people we met on line in Central Park will be joining them. 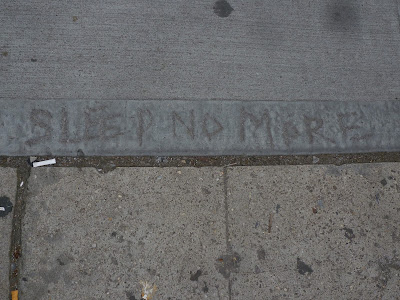 Today we all ventured back into the audience. Diana and her family went to see Spider-Man: Turn Off The Dark. Annie and her NYC friends went to see a cabaret -- it was later I was surprised and delighted to find they were seeing the majestic Ute Lemper!

Annie, Diana, her aunt and I all went to see a FringeNYC production -- Jen Bosworth's Why Not Me this afternoon at Subculture. We had been hoping to see her entire routine since both her show nd ours were featured in three promo events last weekend. Frankly, it was worth the price of admission just listening to her accompanist, Briar Rabbit, play and sing.

By the way, that's just a brilliant idea, ask a talented, young guitarist to vamp while you perform your solo work. It's like beat poetry. Solid. So glad to meet her and see her, she tells great stories, tells them well, she's hilarious, sincere and just really cool.

Tonight, however, James, Emily and I went to see Sleep No More. An immersive theatrical experience, SNM tells a 1930s version of Macbeth in an abandoned hotel, audience members are free to wander the entire space, taking in hours of dialogue-free movement events on three different floors.

I have been interested in seeing this for some time. Developed by a British theater company called Punchdrunk, it was supposed to run two months and has already run two years. I was curious as to how the concept might fare in a long-running circumstance, when it has moved from hip-and-hard-to-get-in-to, to move of a "hey, this looks weird, and there's naked chicks in it, wanna check it?" kind of event.

Regardless, the masks help. The audience members all wear masks, rendering themselves mostly anonymous, cargo shorts notwithstanding. Once engaged, I was taken by the performances, but also anxious that I was missing something on a different floor or in a different room ... until I was singled out by one of the witches, taken by the hand, and led into her room for a one-on-one event.

No, I won't tell you what happened. Or I might, in person, but not here.

Yes, I am very glad I went, and not just for the special attention. Also very glad to share it with James and Emily, who were ecstatic about their experience. Sometimes you get just what you expect, and maybe a little bit more, and that can be a very good thing.
Posted by pengo at 11:48 PM