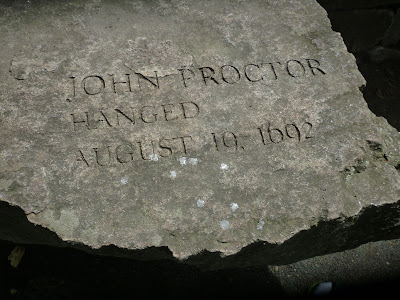 Driving home from our vacation in Maine, the family stopped in to see my wife’s colleague Kim in Salem, MA. They had met at Goddard College, and Kim even moved to Cleveland for all of 2012 to work as my wife’s associate before getting a plum job as a creative writing instructor much closer to her hometown of Boston.

We have been to Salem before but once, long before the kids were born, back in 1996. That was a brief excursion, arriving in the mid-afternoon and only just hitting a few tourist attractions before evening. Like most people, we were there for the witches, but didn’t really explore the town very much before bedding down after dinner and leaving early.

Today we had even less time available, as we wanted to make Utica by dinner, but this time had a guide. I knew there was some serious witch-inspired honky tonk to be seen, but I had no idea how much. Fun’s fun, but it is clear that Salem may be the second-worst American city to enjoy Halloween.

Sometimes I work a little too hard to provide context to my children … I am only trying to help. My own parents would take me historical places without really explaining their significance or what I was doing there. Places like like Canterbury Cathedral, Versailles, or my grandparents’ house.

Paranorman was a good jumping off point -- my daughter liked that move a lot, it just scared the boy, but when I told them Salem is basically the inspiration for the witch-attraction-based economy town in that movie, it made both the movie and where we were make a lot more sense. 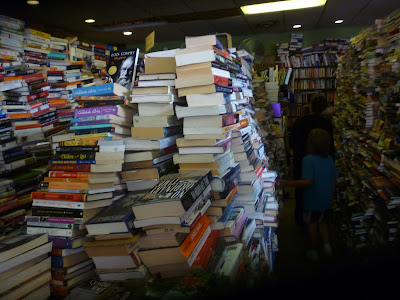 This is not actually a picture of our house.

Kim explained the basics of the witch trial over lunch at Gulu-Gulu, and then we walked down the main promenade, taking in an amazing bookstore (see photo above) and Wyknott’s (Harry Potter-licensed) Wands. The girl was in Hogwarts heaven. If the man were not out of the Hermione model, she would have one in her truss right now.

Our last stop was at the Salem Witch Trial Memorial. Some other year, when the kids are older and have a bit more perspective we may take in the “witch dungeons” and wax museums. For me it was enough to rediscover one of the few spaces of quiet and respect in the midst of all the historical reenactors, and Nosferatu buskers.

Seventeen years ago we approached at twilight. Here in broad daylight it was still silent, there were few tothers around, but they did not speak. The boy and I went around, and he read all of the names, to himself. It is a troubling space, accusatory in its design. Others sat on the stones, two or three, but they all sat to one end, not in the middle, certainly not on the names.

And when you stand, on the path, these present figures in these emtpy seats, they look to you. You may not forget. 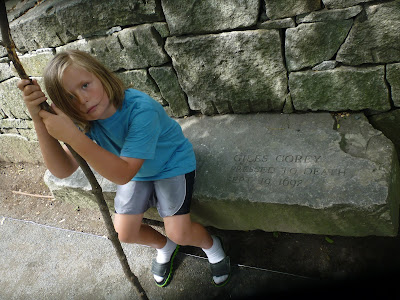