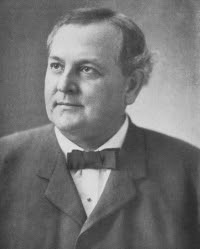 Johnson began his fortune in streetcars, investing in companies and even creating devices such as a see-through, glass fare box for use in trollies which he patented. He was also big in steel.

A Democrat, he was what they used to call a progressive* championing efforts to aid the lower classes, including public utilities, meat inspection standards and keeping streetcar fares low. He expanded the city's parks system, and championed public bath houses (but who doesn't, really?)

Johnson was first elected to the U.S. House of Representatives in 1892 for the 21st District, before running successfully for Mayor of Cleveland, campaigning on "Home rule, 3-cent fare, and just taxation!" and was eventually elected to three terms.

A bronze statue of Johnson, designed by Herman N. Matzen, was erected in Public Square in 1915, which bears the following inscription:


He found us striving each his selfish part.
He left a city with a civic heart.

UPDATE: Mayor Johnson was the inspiration for the character of "The Mayor" in Adventures In Slumberland, which premiered at Talespinner Children's Theatre in 2013.

* Today Liberals have tried to revive the word Progressive so as to discard the much-maligned "L" word. Conservative commentators like Bill O'Reilly have simply used the word liberal and progressive interchangeably, which has rendered the entire experiment kind of pointless.
Posted by pengo at 12:09 PM