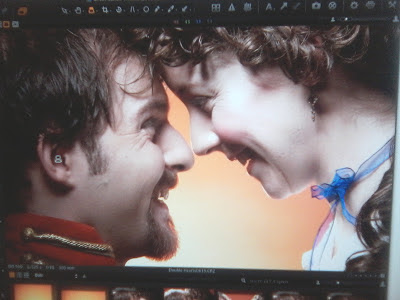 Has it been a year? Todd and I headed over to TRG this afternoon to create the image for Double Heart. As much as I enjoy participating in these photos shoots, I am also happy to sit back and watch. I worry people might not necessarily want to see a play featuring a doughy, bald guy in his 40. And as this play is about young romance, I thought my mug on the poster would be particularly inappropriate.

You may have noticed that it is not necessary for someone actually performing in a play to be featured on the poster. This is the case everywhere, not just with us. However, it does happen. And as we have cast this production particularly early, I was as excited as anyone to have our two romantic leads, James and Emily, featured on the poster.

A few weeks back, Todd, Daniel and I threw out some ideas, and Todd focused on a face-to-face image. Having made that decision, there are still numerous variants. It can be playful, dominant, even somber. The most important thing is that it is intimate. We discussed making the character of Beatrice the dominant one ... however, in practice, if you aren't careful, the taller person must press their chin into their neck. After one early take Emily bemoaned, "Oh God, it's Double Heart, Double Chin."

The shot featured above (I just snapped that from their desktop, that's a rough image) is a better example of what we were playing with. I can't wait to see the final image. I like that we are promoting it as a charming, period romance. But you know me, it all ends in death. 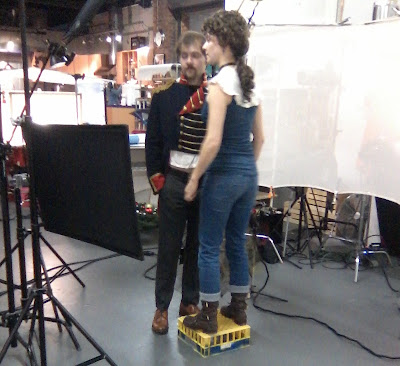 But everything looks perfect from far away.
Posted by pengo at 6:55 PM