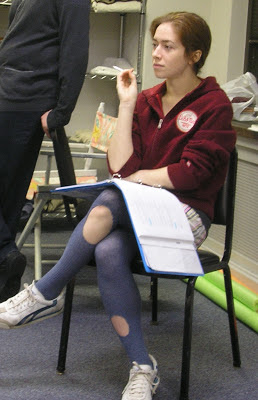 When I was a four year in college, we did Balm In Gilead, Lanford Wilson's tribute to pimps, dopers, losers and twinks. Everyone smoked. I don't just mean the characters smoked, we all smoked cigarettes. Live. On stage. The show was in the round -- the entire audience was practically smoking for the haze that hung over the stage. This was in 1989.

My friend Pete was not a smoker, but he had to play one in this show. And like most non-smokers, he was "bad" at it. By bad I only mean anyone who actually smokes cigarettes can tell when someone who doesn't smoke is just playing at it. It's not just that they puff lightly on it and poof out a little ball of smoke, they can't even hold one convincingly. It wasn't him. It was any of them. There was us, and there was them. And we were smoking like hell, I mean, damn, the school was paying for our cigarettes! They were a prop! 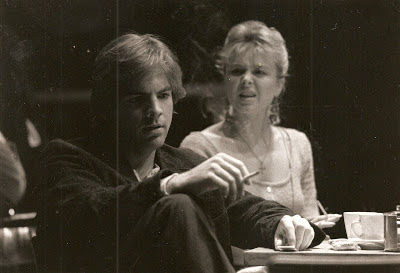 And maybe that's the point. Cigarettes are always a prop, for everyone. Sometimes they facilitate thought. In general they satisfy a chemical urge. But for so many, especially those in the theater community, they are about image. In olden days, they said glamor. Today they say, fuck you.

In any event, in America at least, they day of the cigarette is over. This isn't the demise of a centuries-old custom, it was a 20th century phenomenon. Chain-smoking wasn't exactly cost-effective for the average Victorian prole. The rise of Big Tobacco changed that, at least for a while.

In the meantime, a lot of playwrights wrote a lot of plays about those kinds of people who smoke. And modern theater companies have to deal with the consequences of strict non-smoking regulations, with varying success.

I have seen countrified Noel Coward dandies take out their cigarettes, and their lighters, fiddle with them with intention, get distracted and put their cigarettes away ... as if that ever happens. I have seen actors cope with electronic cigarettes which appear to light and even emit a wan, feeble "smoke" ... and like everyone else, have completely stopped listening to whatever is going on, irritated by the artifice.

And yet, here we are. Technology will catch up. Weak tea is readily accepted as hard liquor, because it looks like it. Last weekend I saw The Whipping Man at Cleveland Play House, which employed a lot of candles, all of which were fake, which I noticed at first but then promptly forgot about, because they were so successfully handled by the actors and flickered and glowed with realism, in a manner which was not possible even ten years ago because they didn't exist because nobody needed them.

I imagine most professional playhouses are relieved to not have to deal with open flame whatsoever. What a headache! The fire marshal has a lot less to be suspicious of, everyone can rest easy. The Globe will not burn down. 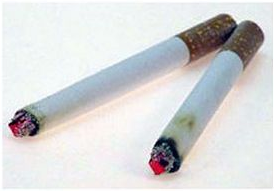 The second part of These Are The Times takes place in the mid-1950s among a troupe of young performers. Historically, such people would smoke. Do they need to smoke? Good question. Even if they could, which they can't, each scene is so short, jumping from rehearsal to performance to backstage, lighting and stubbing smokes all night would be ungainly and prohibitive.

But ... it's a look, it's a style. It's a prop. See: Mad Men. See: Good Night and Good Luck. Last night Mark called a rehearsal for the four actors who make the core of "The Times", my fictional improv comedy troupe. We discussed cigarettes. It just so happened that Valerie had brought her own personal collection of fake cigarettes (see above). Mark and were both impressed with how realistic they look. They accomplish what is required, to be that thing.

I'm gonna go out to Big Fun and get a bunch of them for everybody.

Email ThisBlogThis!Share to TwitterShare to FacebookShare to Pinterest
Labels: smoking, These Are The Times