The lesson plans of the Great Lakes Theater School Residency Programs are a closely guarded secret. But I can tell you we do put students in chains and parade them around their school.

In 1999 they were piloting the lesson plan for The Crucible at Lorain Central Catholic H.S. and Residency Supervisor Daniel Hahn thought it was missing something, that the students were failing to emotionally connect with the kind of humiliation and shame engendered in the scene where Elizabeth Proctor is forcibly taken from her home in chains.

Daniel said, "Why not put chains on the students?" Education Director Kenn McLaughlin was appalled at that idea, and said so. And he added, "Let me know how it works out when you try it."

It's not an exercise we take lightly. The Crucible is a troubling piece of work, it's not merely about the fear of witches or dark forces, or Theocracy or Communism. It's about totalitarianism in all its forms, the loss of the basic freedoms upon which this country was founded. The devastation of relationships, reputation, simple human dignity.

Yesterday we performed the exercise with our actor-teachers, who are now completing their rehearsal process and will begin teaching in schools on Monday. Some were surprised by their reaction to it, which ranged from giddiness and embarrassment to outright boredom and irritation. That's okay. It's not supposed to be fun.

Facilitating he exercise, I do not yell. I do not make them perform acts to humiliate. I do not say please or thank you. I do not make it personal. We simply lead them from place to place, make them stand and wait, keep silent ... in the case of the actor-teachers they were led through a Starbucks. We don't do that to the students, they never leave the school. 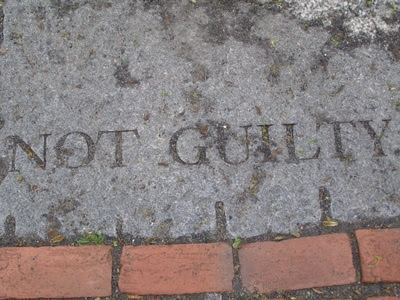 How can you restore a reputation? What labels can never be erased? What is your definition of justice? What do you think?

UPDATE 9/12/2012: It was recently brought to my attention that Residency Supervisor Daniel Hahn and actor-teacher Jeffrey Allen were in the hallway together with a number of students, waiting for Jeff's partner to finish coaching a scene from "Crucible" with the rest of the class, that one of them got the idea to chain up the students waiting in the hallway and march them around the school. Who originally came up with the idea is a little cloudy. However, it was Jeff who originally facilitated the "Chains" exercise. I stand mute before history.
Posted by pengo at 11:35 PM