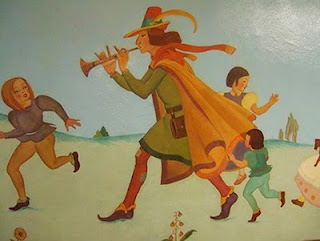 My daughter just started her first session of indoor soccer, which is led at one of the local elementary schools - but not hers. The last time I visited Oxford Elementary School was to hand out information before an election ... Jesus, was that in 2004? Never been inside.

So we're walking from the gym (where they held scrimmage) to one of the classrooms (where they would be conducting strategy, complete with an animated smartboard - classy!) and pass this wide, brightly painted mural.

Finding info on it online was not hard, and led me to a website I was previously ignorant of, a website for the Cleveland Heights Historical Society and an article about the numerous Federal Art Project murals and ceramics to be found at Oxford Elementary, an article written by Mazie Adams, the parent of one of my kid's schoolmates.

Oxford Elementary applied for and received funding for the creation of "two hydrocals (a type of extra-hard plaster) and thirty-five ceramics." In early 1937 the murals were painted directly to the walls by artist Gladys Carambella, the one I saw and that is featured above is of The Pied Piper of Hamlin.

In the 1970s as certain Heights schools were being torn down or renovated, the other mural, depicting the tale of Cinderella was almost destroyed. A little research revealed the forgotten origin of the works - and how federally-funded art is actually protected by the Federal Government. A layer of glue was applied to "save" the artwork, which made the formerly brightly colored work look much worse, and yellowed over the next quarter century. A grant from the Cleveland Foundation led to their proper restoration in 2000.