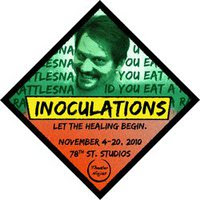 What are the emotional triggers which stimulate the response to create? How can I hear so much which leaves me dead and then awaken to such nonsense and noise? Arriving at the 1300 Space (I have been here before, really) I could not tell where to enter, and then upon entering I still felt like I did not belong.

I knew people and was told the house was upon but sitting in the house was a) an audience plant and b) Amy Pawlukiewicz tearing up a magazine.

I sat and sipped a PBR. It was a little cool, I was wearing a coat, and a ballcap, in a dark room, listening to Amy changes the stations on a real radio and the sound of people much younger than I am laughing in the lobby area. A tweet:

My expectations were high. This were a happening. 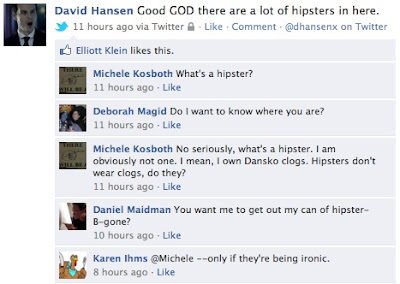 The space was made of office space, cheaply but so well-lit. The words ridiculous but so well-rehearsed. Exciting, rhythmic, and loud. Bodies were made to move, to surprise, but never threaten, not really. Anything with a live drummer is all right with me.

The woman next to me (half my age?) thought everything was HILARIOUS. Even things that weren’t. That was a good thing. The place was oversold on a Monday night. And the second act was written for Nick, it couldn't have been for anyone else. It just taps into his sense of freaky, manic, explosive, irrepressible, cartoony wackdiculousness. And he gets to sing.

There are three more performances. You should go.