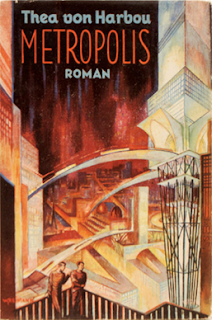 “I feel stupid and contagious.”

Why didn’t anyone tell me Covid was difficult to live with? I am currently reading several books at once, which is good, I’m not usually good at that. The deadlines are coming and they will be constant, from one week to the next.

Did you know ..? The 1927 film Metropolis, directed by Fritz Lang, was adapted from a novel written by Thea von Harbou. It was first serialized and then collated into a book in 1925, though it was always meant to be the source material for the eventual film. This is one of the books I am currently reading.

I’ve been in love with the film since Giorgio Moroder released an abridged version with contemporary score in 1984. Some of the music is dated, very, very dated. Would not recommend someone watch this version for their first time. However, it is because of this version that I know and love this film, so I am very glad it existed, and when it did.

Moroder’s own compositions, however, are still entirely appropriate, most significantly the "Machines" theme.
One of the amazing things about early science fiction is that It does not, in fact, cannot rely on words or phrases we all know which act as a shortcut to our imagination. The word “spacecraft” automatically creates in the mind a picture, one of a self-contained vessel, most likely resembling in shape a nautical ship, set against a black sky festooned with stars.

So much of our modern storytelling is derivative in this way. Those who pioneered the craft of science fiction had their own images to work from, but quite often they were creating brand new images for the imagination, some of which can be quite confounding. Von Harbou’s novel for Metropolis is at times incomprehensible, at least upon first pass. I find myself going over passages a few times to make sure I am picturing what she intended.

This week has been very challenging, as I have been coping with the lingering effects of Covid, and also felt somewhat overwhelmed by all the assignments and responsibilities.

But wait – I had previously been lamenting my lack of deadlines, assignments and responsibilities. I just needed to remind myself how much I have been loving this. Grad school has given me life.
Posted by pengo at 12:00 AM