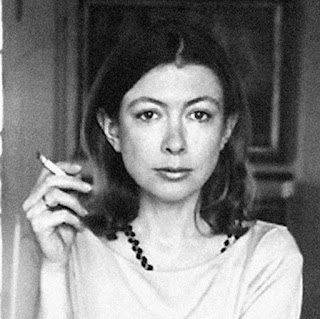 This week I was introduced to the quote above, from Didion's legendary farewell to New York, or perhaps really to her twenties, and I have never imagined a more accurate turn of phrase to describe how one feels to be in their twenties.

After an unexpected interruption both of my classes are in progress and I no longer have any spare time, which is fine. I can just go back to saying no to everything.

Of course, it also helps if you have contracted Covid, which I have. Lucky me, it’s not as bad as I feared it might be. I cough, nights are difficult, I am achy and I wake a lot.

Monday night I was able to attend my first playwright’s workshop via speakerphone. The professor is really cool, he said he could run it all by me when I felt better, but like I said, there’s an awful lot to do and I’d rather not get behind on anything.

Without going into much detail, I am going to be able to use techniques from my creative nonfiction class on my first project in workshop. The man said I have to write a play that saves the world ― and go. I have a lot of people to talk to now to figure out how to do that.
Meanwhile, I am having a serious crisis of faith. This is compounded by my illness, and by the antihistamine I have been ingesting daily to quell my symptoms, and also the cavalcade of minor tragedies and disappointments which have befallen as a result of said illness.

I have had eye surgery, now Covid. I have been made despondent by weakness and dis-ability. I am sick and tired of being sick and tired.
This morning the wife and I watched Griffin Dunne's tribute to his aunt, the Joan Didion documentary The Center Will Not Hold. Last week I only knew her by reputation, now I have read a little of her work, seen her life, and fallen in love. I also have no excuse not to move forward, still.

“I don't know what I think until I write it down.”
― Joan Didion