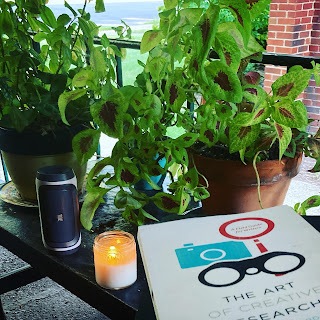 "Some craven scruple of thinking too precisely on the event."
- HAM IV.iv

My concentration is greater in the morning than the evening (whether or not I have been drinking) but time is short. That could be part of it. This week we had a 200 page text and I was constantly distracting myself.

"Why not skim?" she asks. Because I’m not good at it. Because I like to read, not process, information. And because my eyes, I guess.

But also! This particular text is a guide to creative nonfiction. And I realized I spent a lot of time ruminating over a potential subject for my paper and had to go back over the same paragraph several times.

Recently I dug up an archive video of the Cleveland Public Theatre workshop production of my solo performance And Then You Die (How I Ran a Marathon in 26.2 Years). It's not the best video, but the sound is all right, and it was good enough to get us into the New York Fringe in 2009.

I forgot how funny it was. This scene is about when I was twelve and had a crush on a character from the animated film Animalympics. I also forgot how much of this play is about my sexual interests. I have come to the realization that writing and performing this play was my midlife crisis.
Posted by pengo at 12:00 AM