"Hadestown" at the Walter Kerr Theatre 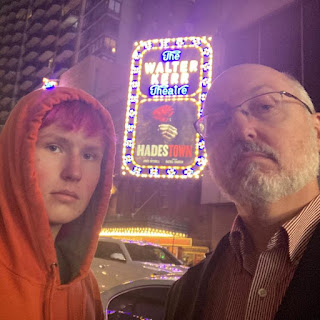 “You almost got hit by a bike.” That became our running gag in New York City last weekend.

Maybe two years ago, my son asked to see Hadestown which was something of a surprise. He’s been attending the theater since he was three, but had never asked to see a specific show.

Apparently, he’d been following the process for many years, though he can’t remember why. It’s a well-reported story, the journey from song cycle to concept album, from Off-Broadway to the Walter Kerr Theater.

The tour was scheduled to be in Cleveland last spring, canceled due to COVID. For his sixteenth birthday, as I had for his older sibling, I offered him a weekend in New York, and one that hopefully included the show. When tickets went on sale, I got the very best seats; mezzanine, front row center. He likes being seated above the floor.

My wife finds the best places to stay, in this case a former “cold water flat” in the East Village, with a clawfoot tub in the living room and literally no closet space. I had to go outside to change my mind! Perfect for our needs, however.

When asked what else he’d like to do, he said he’d like to hear live jazz. Not a concert, a set at a club or something. Our first night, we stepped into a place in the West Village. The bouncer asked if he was over 21, and I said no.

I told him the truth. I gestured at my son and said, “He’s just here for the music.”

He looked at us both for a moment and then waved us in. “He can’t drink,” he warned us, which I guess was obvious, but I decided it would be best if I also didn’t drink. 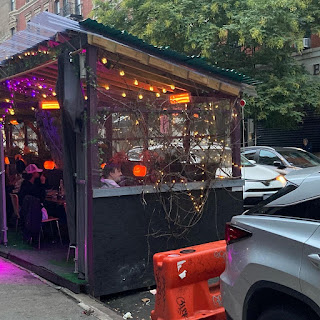 As I’m counting out the cover, the guy leaned in and rubbed me on the shoulder. “You having a good night?” he said. It was a sweet gesture, sympathetic. Dad taking his son to hear some music, you good? I love this city.

There was a quartet, the leader was the keyboard player, a purveyor of bop. He was a well-experienced sideman, one who had even played with Benny Goodman in the early 1980s. We sat and listened to the first set, keys, drums and bass, the sax player arrived late. The boy was highly satisfied by the drummer.

We played pool and enjoyed the second set when they really began to rip. It was energetic and high. The clientele surprised me, a diverse though obviously well-funded selection of young Millennials drank and hooted and played pool and ping-pong while to one side a more intense and appreciative set sat in remaindered church pews and leaned into the jazz. I was not the only person of my age in attendance.
The boy would have liked to see them take it further, but after the second break we agreed it was best to call it a night. I touched the bouncer’s elbow on the way out. "Thanks, man."

The extent to which restaurants and cafés have moved onto the sidewalks and into the streets is remarkable. This is the case everywhere, but the street we were starting on is lined with restaurants, and their exterior dining areas took up the majority of available parking spaces.

At night they are lit up and magical. Most have been constructed, but there were also prefab plastic sheds like you’d get at a hardware store which also looked quite cozy.

We made a plan to run in Central Park. It was cool and overcast and threatened to rain, and we took the train to save all our steps for the park. Together we ran ten miles, and I was overwhelmed but grateful. We spent the afternoon eating, resting and eating.

And then we departed for Hadestown.

I knew little about this show. I knew there were people who thought it was weird, and also that it had won many awards. I knew about André De Shields, and Reeve “Spider-Man” Carney. I knew it was based on the myth of Orpheus and Eurydice.

I heard it was weird, that people were surprised it made it to Broadway. And I found it more beautiful and engaging than I expected. It’s one of the few musicals that has truly touched me in a long time.

And it was the first musical I have seen since the pandemic. Yes, we had our vaccination cards at the ready. Yes, we all kept our masks on, the entire audience. This very weekend Peter Marks (Washington Post) tweeted that London audiences are outright ignoring requests to wear masks.

There is a lot of silence in the play. Shockingly, not one cell phone went off all night. Can you imagine? During the song “Livin' It Up on Top,” a roaring ensemble number, Orpheus is asked to give a toast, and he and the company lift their tin cups to each other. The music breaks and he says:

Then, cups raised, they turn to the audience, and look at us, wearing our masks.

Hold. Silence. It was startling.

There were folks sitting behind us, at least one of them was familiar with the music, and had their opinions about the understudies, but my son and I agreed the woman playing Persephone was just wonderful. 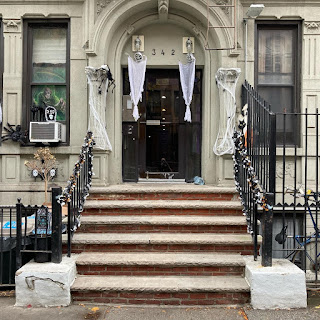 The guy who originated the role of Hades Off-Broadway is engaged For another couple weeks, but they got Tom Hewitt who is a storied performer and it seemed like he was doing a spot on impersonation of the originator. It was intense.

The other three leads were played by the people who were brought on for the Broadway production. I was unfamiliar with Eva Noblezada (Eurydice) but she was heartbreaking.

Reeve Carney is far more fascinating to watch and listen to than I thought he would be. You ask yourself, how does someone perform Orpheus? How do you sell that his singing would make the devil cry? And yet, he does.

And André De Shields was the André De Shields. I have seen performances headlined by a brilliant star (Hamlet with Ralph Fiennes at the Belasco comes to mind) where I am ultimately disappointed by the production as a whole. And this is an ensemble work that is greater than the sum of its parts. Having said all this, that the storyteller is such a magisterial and accomplished performer, and that I had the blessed opportunity to see him … I do not seek out these moments. I am only so grateful when I experience them.

I was awake for a couple hours in the middle of the night, early Monday morning. So I decided to read the reviews, to learn a little more about the process. Apparently, somewhere along the line, someone told composer Anaïs Mitchell that beautiful music is beautiful, but you can’t assume the audience knows what you’re thinking. Let them in. 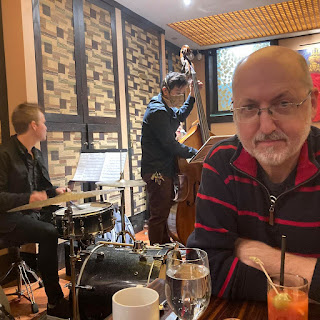 Oh it is truly strange how magical the street looked at night, and how mundane it appeared in the morning. There’s a metaphor in there somewhere about a one-night stand but I’ll leave that to someone younger.

Sunday was casual, we rose late and attended a “jazz brunch” at a nearby hotel. One thing I have always loved about NYC are all the close, cozy spaces. This is not necessarily a good thing during a global pandemic, but we showed our vaccination cards and ducked into our table, right next to the drummer.

It was cool, early afternoon of standards and originals, a trio with keys, bass and drums, led by a female vocalist.While this type of jazz is not our son’s favorite thing, he respected their skill, and it stood in contrast to Friday night’s musical frenzy. It was a lovely set, and a sweet close to a very special weekend.
Posted by pengo at 12:00 AM