I’m not horribly prolific, but considering it took forty years before I decided it was time to call myself a playwright (as opposed to an actor or a director) I am at least gratified to create one play a year. Sometimes they even get produced.
Last year I wrote Forget About Me (The Breakfast Club Play) and over the course of one year had submitted that one to forty-five different places; theaters, competitions, and festivals. Beginning January 1, I expect to receive a number of rejections and also a lot of silence.

No matter. As the man said, “Move on.” I have already begun submitting my new play, No One Wants To Work Anymore. I have a job. I have my family and my health. The work continues, and move on.

These are ten artistic projects I have been involved with in some capacity during 2021.

The year began with fully-realized Zoom performances of this piece, produced by Cleveland Public Theatre and presented over three weekends with the company performing different roles for four different iterations of the script. If it was possible to have a live theatrical event during the shutdown, this was it.

As things began to open up in other parts of the world, a postponed performance of I Hate This, re-titled What Happened for Indian audiences, opened in Chennai. For the first time, this monodrama was divided between two actors. Chennai Art Theatre remounted the work in Pondicherry in October!

This year the All-Ohio Thespian Show was an online collection of short films called Time Capsule, chronicling the year 2020, season by season. It was all-original, written and produced by the students themselves, directed by Chennelle Bryant-Harris. I was tapped as dramaturge and New York-based artist SMJ was the movement coach. 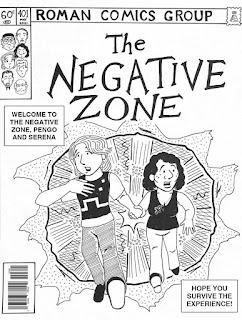 The Children Who Played at Slaughtering

The NEOMFA Playwrights Festival went virtual in 2021, short films were adapted from short play scripts. My piece was an animation from my take on the Grimm’s Folk Tale, The Children Who Played at Slaughtering, directed by Dan Riordan, animation by Chris Gleason. It’s a seriously bent piece of work and I fear that if it is ever posted online it may ruin my career as the writer of children’s plays.

My final project for a course in Comics Studies and Queer Theory was a book adapted from a short play scripts about comic book shops from the early 1980s. Every Saturday for ten weeks I spent the entire day (or longer) creating one page. I’m pretty pleased with the result, which you can read as a digital comic for only $1.99.

I Hate This produced by Playhouse Square

Last spring we recorded an amazing filmed version of our story, performed by James Rankin, and also directed by Chennelle. Ananias Dixon as videographer also played a major role in the shape the work has taken. We are still trying to decide the best way to present this piece, but I am grateful that it is done. It’s something I have fantasized about for over fifteen years.

For (over) twenty years I have been working with actors to bring the residency program into area schools. This year is different, for too many reasons. But the people are so good.

Last Spring I was delighted to learn that not only was my Holmesian pastiche to be published by Pioneer Drama Service, but that the script had received the Shubert Fendrich Memorial Playwriting Award!
Schools in the United States and Canada are now taking up their own productions of Sherlock and Vicky running down missing paintings and the bully of Baker Street (see photo from the Jupiter Christian School production, right).
It is madness to think that only two years ago we were creating the original production for live performance in area schools.

10 Minutes to Midnight: 9 Quirky Plays for the Holidays

There was a time when a major part of my creative output was shepherding writers to create short plays on a single theme, and I was very gratified to be one writer in such a project curated by someone else. Directed by Caitlin Lewins with Ananias, for Cleveland Public Theatre, this was a delightful way to end the year.
NEOMFA Playwrights Festival 2022

The world is shutting down, again. Don’t act surprised. Last week there was a small gathering to read through those plays which (maybe, hopefully) will be presented at the NEOMFA Playwrights Festival at convergence-continuum in early 2022. I have a ten minute play which is (currently) titled The Ocean Breathes Salty. What’s crazy is that two of the four actors in this ten-minute piece attended Camp Theater! in years past.
However the new year shapes up, we will create. It's what we do, right?
Posted by pengo at 12:00 AM

Email ThisBlogThis!Share to TwitterShare to FacebookShare to Pinterest
Labels: 10 Minutes to Midnight (play), I Hate This (play), Savory Taṇhā (play), School Residency Program, The Children Who Played at Slaughtering, The Negative Zone, Thespians, What Happened (play)