10 Minutes to Midnight (In Performance)

Now I've heard there was a secret chord
That David played, and it pleased the Lord 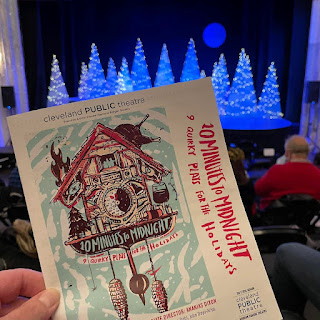 Opening night of 10 Minutes to Midnight at Cleveland Public Theatre was sold out. I was stunned. And so pleased. Given the wide selection of holiday offerings, either already playing or opening this weekend, why attend a new show, one that’s description is vague enough to suggest it could be absolutely anything:

There’s a lot of promises in there. Is it a party? I believe it is, from the jump there was a lot of enthusiastic answering back from the crowd. It’s certainly a 10-minute play festival, running the gamut from a fictional 90s sitcom Christmas episode, Millennials discussing the perils of possible procreation, and one particularly inspiring piece about the greatest love of all (and no, it’s not that.)

The great thing about a short play festival is that if you’re not into one piece, it won’t last long and then you get something else, brand new! Taken together, however, these scenes do communicate a shared humanity, and also a shared anxiety, but ultimately a communal joy.

I was reminded, somewhat, of the “vaudevilles” the company would present back in their early years, some thirty years ago. This show isn’t the same as those, the vaudevilles were like an open mic night for theater, and the content could be wide-ranging in its theme and polish. But the democracy of the CPT stage is something which continues. It is a very inclusive show, which is to say we are all included.

I sat in the back, in the middle, watching the house fill to capacity around me, chatting with a surprise old friend, like me unencumbered this particular evening by either a partner or child. How to describe the feeling, the mood among the assembled, recognizable supporters of CPT, coming together, in this space, for the first time in nearly two years.

After the show, many people came up to me to tell me how much they enjoyed my play. I was never sure which one they meant. I have this strange, internal conflict regarding opening night post-show events. Seeing as how I work for a theater company I need to attend several of these a year and while I love to meet and greet and catch up with the folks involved in the production, those who have no time to socialize at all for the previous month or so, I also have a degree of social anxiety that makes me just want to ghost.

And yet, I felt this warm compulsion to reach out to as many members of the ensemble and creative team as I could to thank them for their work. As I was leaving, I said to a colleague. “Okay, I have to ghost,” which was a stupid thing to say because announcing you are ghosting is antithetical to doing it. Also, most of the crowd had already gone, which meant it was time for us all to go, anyway.

Cleveland Public Theatre presents "Ten Minutes to Midnight: 9 Quirky Plays for the Holidays" directed by Cailtin Lewins, continues through Sunday, December 18, 2021.
Posted by pengo at 12:00 AM